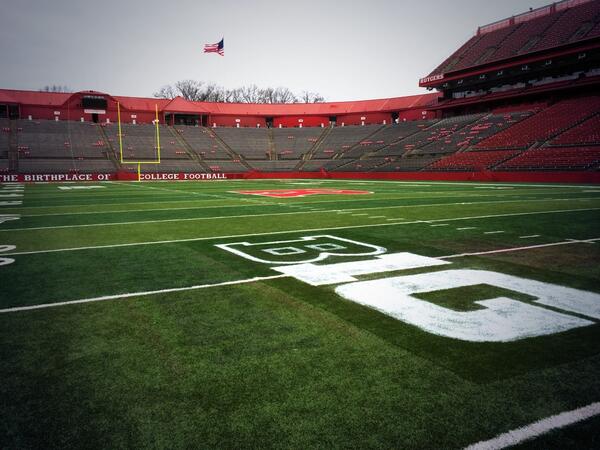 The first football can?t be kicked off soon enough for the Big Ten as news out of Rutgers has five Scarlet Knight football players arrested in connection with a home invasion and assault.

According to the story by Keith Sargeant of NJ.com, the five current players charged in the attack are: Andre Boggs, Ruhann Peele, Nadir Barnwell, Razohnn Gross, and Delon Stephenson.

Rutgers said the players have been suspended indefinitely. Rutgers Athletic Director Julie Hermann announced the suspensions in a statement and added, "We continue to monitor the situation. We will have no further comment as this is a pending legal matter."

Recently, a report emerged that said RU coach Kyle Flood improperly e-mailed a professor about one of his player?s academics after supposedly being told not to do so. Cornerback Barnwell was involved in both instances recent events and he?s the player Flood was reportedly asking about to the professor.

The latest revelations have brought Flood under scrutiny. Will he be able to survive? Flood has done a nice job building the program the last three seasons since taking over for Greg Schiano, going 23-16 overall with three bowls. RU went 8-5 (3-5 league) in its Big Ten debut last year. Optimism percolated for 2015.

Now, the ugliness of the last few days has cast a pall over Rutgers, which opens at home on Saturday vs. FCS Norfolk State.

Also in April 2014, it was reported Rutgers A.D. Julie Hermann said ?that it would be great? if a local newspaper died. And Rutgers also drew criticism when it rescinded an invitation for paralyzed former Scarlet Knights football player Eric LeGrand to speak at commencement in 2014-then reconsidered.

It's been a bumpy offseason for the Big Ten in general. In addition to the Rutgers news, in the last six days, the league has seen a head coach get fired for alleged mistreatment of players  in Illinois? Tim Beckman. Before that,  Minnesota A.D. Norwood Teague resigned amid sexual harassment allegations.

Michigan takes the wraps off the much-anticipated Jim Harbaugh era tonight at Utah and Minnesota plays one of the biggest games in the last 60 years tonight at home vs. TCU.