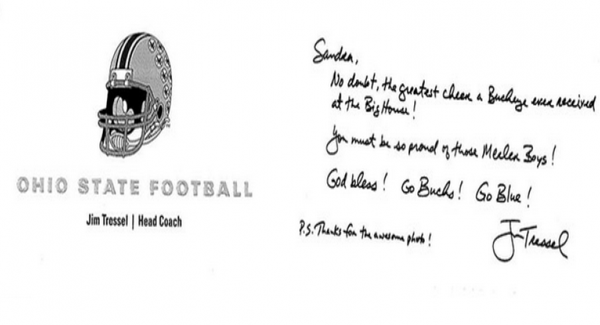 There are plenty of great, touching stories throughout the college football world… And then there is this story.

Former Michigan offensive lineman Elliott Mealer, who played for the Wolverines from 2008-2012, recently opened up about a special letter his family received after his brother, Brock, was able to walk again after being paralyzed from the waist down in a car accident in 2007.

The letter came from former Ohio State coach Jim Tressel, who knew Mealer after recruiting him out of high school. It was addressed to Elliott and Brock's aunt, Sandra Mealer Barber. The letter congratulated the family of their accomplishments after Brock had the opportunity to walk onto Michigan's field and touch the "M Club" banner before the season opener on Sept. 4, 2010.

See the letter from Tressel in the tweet above.

Elliott Mealer shared the story with Steve Kornacki of MGoBlue.com.

"It was hand-written and it really touched me," said Elliott. "Jim Tressel and his brother, Doc, recruited me."

Many know Ohio State and Michigan as being one of the most intense rivalries in all of sports, not just college football. But this is the type of story that you have to appreciate, no matter where your college allegiance lies.