Best of Week 1: 'It doesn't get much better than' Meyer vs. Beamer 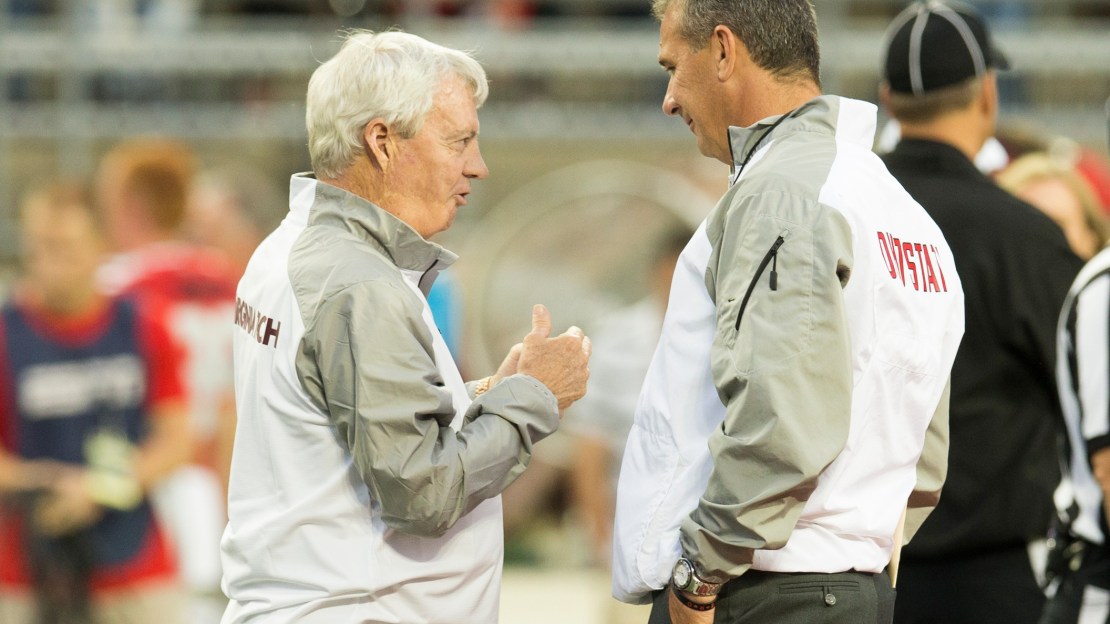 Finally, it is game week! Hallelujah!

Even better: The opening week of action is filled with some interesting clashes headlined by Ohio State?s visit to Blacksburg, Virginia, to play Virginia Tech.

Wait. There?s more. Other heavyweight clashes include TCU at Minnesota; Wisconsin vs. Alabama in Arlington, Texas; BYU at Nebraska. Stories within those stories–Paul Chryst will be making his debut for the Badgers vs. Nick Saban and the 10,000-pound beast that is Bama football, while Mike Riley will be coaching his first game for the Cornhuskers vs. a very good BYU squad led by talented QB Taysom Hill. TCU?s Gary Patterson and Minnesota?s Jerry Kill are best buddies. And did I mention that the Horned Frogs are a legit national title contender led by star QB Trevone Boykin, and this may be the best Golden Gophers squad in generations?

The Stanford at Northwestern is a good chance for the Wildcats to get on track after back-to-back 5-7 seasons. A win vs. a good Cardinal club that has gone to six bowls in a row could be a confidence booster. Stanford finished 2014 as one of the hottest teams in the nation and will have a good offense. The defense? It has questions.

Purdue and Marshall played a wild one in Ross-Ade Stadium in 2012, with the Boilermakers taking a 51-41 decision. The Thundering Herd had 534 yards; Purdue had 443. Marshall will have a monster offense again. The Boiler attack? Who knows?

Four teams will open with lighter fare, playing FCS foes: Iowa, Rutgers, Maryland and Indiana. The Hawkeyes need to be careful when they entertain a good Illinois State squad that played for the FCS title last year and is led by ex-Indiana quarterback Tre Roberson and coached by former Purdue linebacker and defensive coordinator Brock Spack.

Here is a look at the Best of Week 1:

BEST GAME: Ohio State at Virginia Tech. This is a prime-time Monday night affair on Sept. 7. And the Buckeyes will be seeking revenge after falling at home to the Hokies last season, 35-21. Turns out, Tech was a mediocre team, finishing 7-6. It is the last time Ohio State lost, as the Buckeyes have reeled off 13 victories in succession and won the national title last season. The ?Enter Sandman? intro will blow the roof off Lane Stadium. Monday can?t get here fast enough.

BEST MATCHUP: BYU passing game vs. Nebraska secondary. Cougar QB Taysom Hill is back from a broken leg that ruined his 2014. Before that, Hill was a Heisman hopeful. He will throw to 6-6 wideouts Mitch Mathews and Nick Kurtz, known as the ?Twin Towers.? Gulp. This will be a stern test for what looks like a good Nebraska secondary. How will it hold up? The matchup could decide the game.

PLAYER ON THE SPOT: The Ohio State QB-whoever it is: Cardale Jones or J.T. Barrett. Urban Meyer has said he won?t name a starter until the day of the game at Virginia Tech. Honestly, will the Buckeye offense be much different no matter who is in charge? The signal-caller must hit some passes down field to create room for RB Ezekiel Elliott, who is the key to the offense-and maybe the season.

KEEP AN EYE ON: The Wisconsin o-line. The unit may not be up to the usual standard in Madison. There are three new starters-and depth isn?t great. If this unit shows cracks, it could impact star RB Corey Clement. And the Badgers may have little chance to beat Alabama in Arlington, Texas.

BEST COACHING MATCHUP: Jerry Kill vs. Gary Patterson is a good one. But let?s go with Urban Meyer vs. Frank Beamer, two icons. Meyer has won three national titles and has the hottest program in the nation. Beamer is entering his 29th season in Blacksburg with a 273-138-4 mark and has built one of the nation?s most respected programs. He is the winningest and longest tenured coach in FBS who has been to 22 bowls. It doesn?t get much better than this.

BEST QUARTERBACK MATCHUP: Michigan State?s Connor Cook vs. Western Michigan?s Zach Terrell. Cook, a senior, is a legit Heisman contender who led the Big Ten in passing last year with 3,214 yards and is 23-3 as a starter. Terrell, a junior, will be one of the top signal-callers in the MAC after throwing for 3,443 yards in 2014 with 26 touchdowns. He is on the Manning watch list.

BEST COORDINATOR BATTLE: It will be fun to watch TCU offensive coordinators Doug Meacham and Sonny Combie match wits with Minnesota defensive coordinator Tracy Claeys. In their first season running the Horned Frogs attack, Meacham and Cumbie helped TCU become the nation's most improved offense in total yards (plus 188.2 ypg) and scoring (plus 21.4 ppg). Want more? The 2014 Horned Frogs ranked second in the nation in scoring (46.5 ppg) and tied for fifth in total offense (533.0 ypg). Oh, and there is this, too: TCU set 26 school records for offense in winning its first Big 12 championship behind QB Trevone Boykin. Claeys is no slouch. His 2014 Gopher defense held 10 teams below their final season scoring averages. In one stretch, the Claeys-led defense held three consecutive conference teams at least 13.8 points below their averages. The Minnesota secondary is the best in the Big Ten. How will it do vs. Boykin and Co.?

UPSET ALERT: Alabama hasn?t lost a season opener since 2001. Could the Crimson Tide slip vs. Wisconsin in Arlington, Texas? Nick Saban?s Bama club is breaking in a new quarterback and needs some wideouts to emerge, along with a running back. And the secondary has something to prove, too. Can the Badgers take advantage, while finding running room vs. what should be a strong Bama front seven? Oh-by-the-way: Michigan played the Tide in this venue to open 2012 and got plastered, 41-14. What an opportunity for Paul Chryst in his debut for the Badgers.