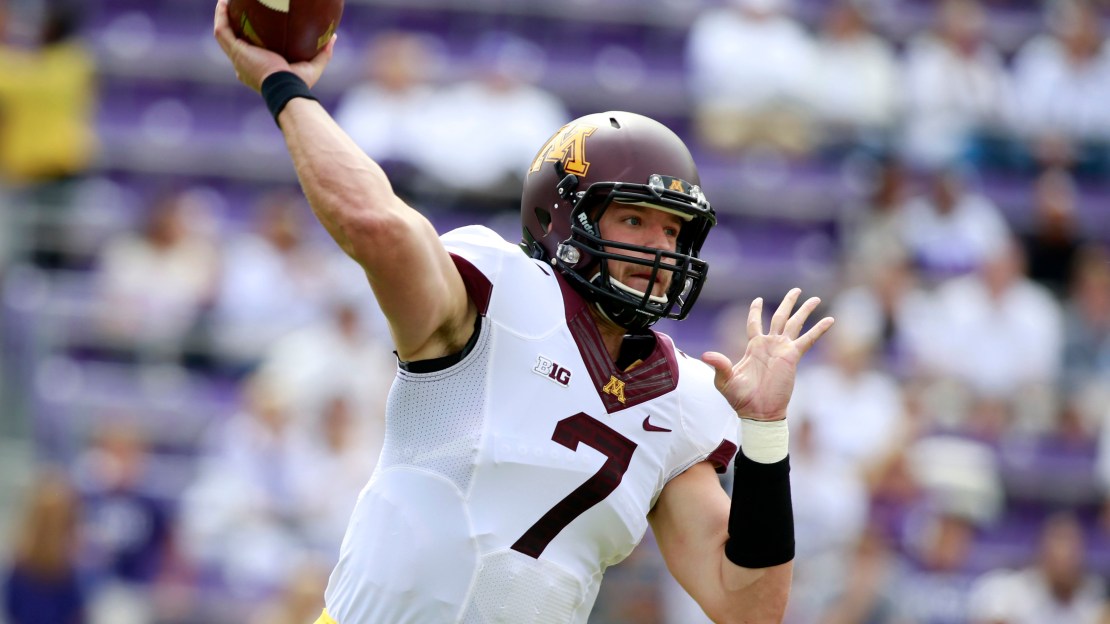 Week 1 of the 2015 season is here. Finally, all of the talk, analysis and conjecture are finished. It?s time to put up or shut up on the field and throw away your preview magazines.

The Big Ten season opens with 14 games, including a few high-profile tilts headlined by Ohio State?s visit to Virginia Tech that will go a long way to shaping the league?s image this season-and early playoff pecking order.

Here is a look at each game this week, as there are tilts each day from Thursday to Monday.

TCU at Minnesota – 9 p.m. ET, Thursday (ESPN)
Two wins over Nebraska and a Little Brown Jug victory last year at Michigan were sweet. But Jerry Kill is still looking for a signature win. This would be it. The Horned Frogs are No. 2 in the AP poll, a favorite to reach the playoffs and maybe win the whole shooting match. TCU ripped the Golden Gophers last year in Fort Worth, 30-7. Maybe Kill can payback ol? buddy Gary Patterson in the Twin Cities. If Minnesota wins, it probably will have to be a low-scoring game.

Michigan at Utah – 8:30 p.m. ET, Thursday (FS1)
This is the day America has been waiting for since Jim Harbaugh unpacked his khakis and long-sleeved blue shirts in Ann Arbor. All the hype and chatter around Harbaugh have been exhausted. It?s finally time to play actual real football. And, this trip to Salt Lake City will be a stern test for Jimmy Ballgame. Kyle Whittingham?s Utes are typically a tough, physical team. In fact, they look and play a lot like Michigan used to under Bo. If the Wolverines win, we all will be wearing khakis on Friday morning.

Kent State at Illinois – 9 p.m. ET ET, Friday (BTN/BTN2Go)
This became a big game for all the wrong reasons last week, when Tim Beckman was abruptly canned in the wake of an investigation that revealed his alleged mishandling of injured players. What will be the Fighting Illini?s mind-set with offensive coordinator Bill Cubit serving as interim head coach? Can the sage Cubit keep the team on track? And on and on the questions go. This will be a good early indicator. The good news for Cubit and Co.: The Golden Flashes stink.

Michigan State at Western Michigan – 7 p.m. ET, Friday (ESPNU)
The Western Michigan fans in Kalamazoo will be jacked to see the Spartans wade into Waldo Stadium for the first time ever. And you know Broncos coach P.J. ?Row the Boat? Fleck will have his team geeked beyond belief. The Spartans have won the last nine meetings dating to a 1919 loss. This may be close for a quarter or so before Mark Dantonio's talented squad breaks Fleck?s oar over its muscular knee.

Illinois State at Iowa – noon ET, Saturday (BTN/BTN2Go)
Be careful, Hawkeyes. This is a very good Illinois State squad that is coming off a 13-2 mark and an appearance in the FCS championship game under Brock Spack, a former star Purdue linebacker and Boilermaker DC. The ISU QB? Ex-Indiana dual threat signal-caller Tre Roberson. He?s a wizard. Iowa?s defense must set the tone while its offense finds a groove under new QB C.J. Beathard. Lose to the Redbirds, and the earth may open up and swallow Kinnick Stadium.

Richmond at Maryland – noon ET, Saturday (ESPNU)
Richmond is no pushover, going 9-5 last year with a trip to the FCS playoffs. Still, this a game the Terrapins should win, and one they need to focus on getting physical with an o-line that should be the best yet under Randy Edsall's watch. Just pound the rock, Maryland, use your size to your advantage, and move on to your Week 2 matchup with Bowling Green.

Stanford at Northwestern – noon ET, Saturday (ESPN)
This is no way for a team coming off consecutive 5-7 seasons to start the year. But, here are the Wildcats, playing a physical Cardinal team that is well-coached and finished 2014 on a roll behind QB Kevin Hogan, who is back. Northwestern?s offense will be on the spot. Is the o-line getting a push? How does new QB Clayton Thorson look? Without a few big plays, NU may have a difficult time winning. The good news: Stanford?s defense has seven new starters.

Norfolk State at Rutgers – noon ET, Saturday (ESPN News)
In a word: Why? Why is this game being played? This is the closest thing to a ?preseason? game you?ll find in the Big Ten. The Scarlet Knights have played Norfolk State three times, all at home, since 2007. And Rutgers has outscored Norfolk-get this–128-0, in going 3-0. That's an average final score of 43-0, for those non-math majors. Only drama in this one will be if this is the year Norfolk State finally gets on the scoreboard.

BYU at Nebraska – 3:30 p.m. ET, Saturday (ABC)
If Cornhusker fans haven?t yet heard of BYU QB Taysom Hill, they soon will. He is back from a broken leg that ruined his 2014. Before that, Hill was a Heisman hopeful. He will throw to 6-6 wideouts Mitch Mathews and Nick Kurtz called the ?Twin Towers.? Gulp. This will be a stern test for what looks like a good Nebraska secondary. But how will the Husker offense look in Mike Riley?s debut? All eyes will be on QB Tommy Armstrong. Can he run this West Coast/pro-style attack? If the Huskers get in a shootout, they may be in trouble.

Penn State at Temple – 3:30 p.m. ET, Saturday (ESPN)
This is a potential trapdoor game for James Franklin and the Nittany Lions, playing on the road vs. an instate foe. For what it's worth, Temple hasn?t beaten Penn State since 1941(!). Since then, the Nittany Lions have gone 39-0-1 in the one-sided series. The last time the Nittany Lions played at Temple, however, they barely won, taking a 14-10 decision in 2011. I?m just sayin?.

Southern Illinois at Indiana – 4 p.m. ET, Saturday (ESPN News)
This is what those in the biz call a ?layup? game. That?s right. The Hoosiers should take care of business vs. a FCS foe coming off a 6-6 season. Indiana is too big and strong on offense and should be able to run for 300 yards vs. Southern Illinois to take a breezy victory. It?s all about building mojo and confidence for IU at this point of the season. And this is just what the doctor ordered. Enjoy this one, Hoosiers.

Wisconsin vs. Alabama in Arlington, Texas – 8 p.m. ET, Saturday (ABC)
The Badgers opened the season in Texas last year and lost to LSU, 28-24, in a game they probably should have won. That was then, this is now. Paul Chryst is the new man in control in Madison. Bama has a deep and talented d-line that may overwhelm a Wisconsin front that has three new starters and spotty depth. But the Tide may have its own issues on offense going against a good Badger defense, as Bama has a new quarterback and lost its top back and top three wideouts. And three linemen are gone, too. So, Wisconsin has a chance, right?

Purdue at Marshall – 3 p.m. ET, Sunday (FS1)
You hate to label the season-opening game as a ?must win.? But, that may be the case for the Boilermakers if they want to reach a bowl game for the first time since 2012. Purdue will face a rabid environment in Huntington, West Virginia. It also will face a team coming off a 13-1 season with as much talent-if not more-than itself. The Boilers need to limit big plays vs. a potent Marshall offense, and make some of their own vs. a Herd defense with some holes. This may be a fun, high-scoring game like the last (and only other) time they met in 2012, when Purdue took a 51-41 triumph in West Lafayette.

Ohio State at Virginia Tech – 8 p.m. ET, Monday (ESPN)
No need to remind the Buckeyes of last year?s meeting with the Hokies, which resulted in a 35-21 loss in Columbus. That was Ohio State?s only loss last season en route to winning 13 in a row and the national title. The Buckeyes will be without four key suspended players as they trek to Blacksburg for the first time ever: DE Joey Bosa, H-backs Jalin Marshall and Dontre Wilson and wideout Corey Smith. Plus, emerging receiver Noah Brown suffered a season-ending broken leg last week. If Ohio State wins, it should cruise to a 10-0 start before finishing at home vs. Michigan State and at Michigan. They will be holding their breath in Columbus, as this one could be close and decided in the fourth quarter.