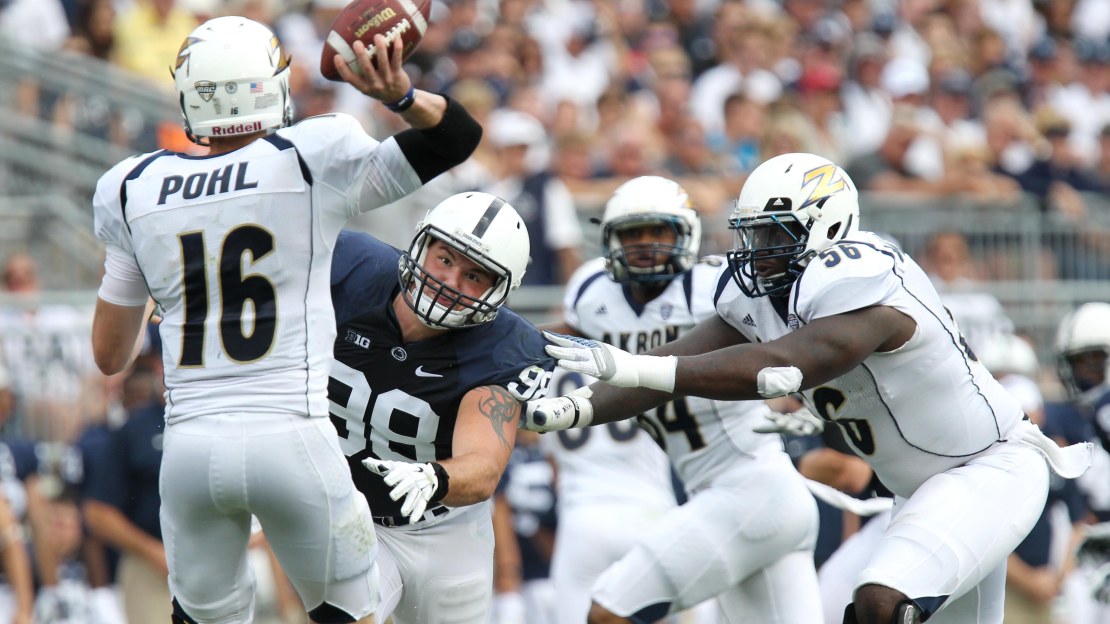 Fun story from Bob Flounders of Pennlive.com on Penn State DT Anthony Zettel. Is there anything he won?t try? He can whip Christian Hackenberg in golf. What else?

"I am a better golfer," Zettel told Flounders.?I beat [Hackenberg] by two strokes. We both didn't play that great. He's very competitive. He's got a big ego and he loves golf, he enjoys it. We both do. But it's just how it is."

How about this: Illinois football games now will be broadcast in Mandarin Chinese.

This reports says there are 43,603 students at the University of Illinois. Around 10 percent of those students hail from China. So what better way to get those students excited about Fighting Illini football than by broadcasting home games in Mandarin.

Rutgers coach Kyle Flood came under fire recently for emailing a professor. Would that behavior had gotten him in trouble at other Big Ten schools? NJ.com takes a look.

Kelly Heyboer writes that most schools, including Rutgers, employee academic services personnel to serve as a liaison between student-athletes and professors to help arrange for making up assignments and classes missed due to travel, practice or games. Several schools told Heyboer they forbid coaches from talking directly to professors because even innocuous conversations about a player's well-being could be interpreted as pressure to improve a player's grade.

It will be interesting to see how Flood?s case is resolved by RU.

The great Tom Shatel of Omaha.com has his prediction for Nebraska for the 2015 season.

It?s all about positive football in Mike Riley?s first year, Shatel says. The chalk pick this season is 9-3 or 8-4, and Nebraska right now is a chalk program ? so says Shatel. And, he?s correct. NU should beat who it should-and lose to who you would expect. Still, Nebraska has the talent and physical presence up front to win its division, win the game at Minnesota, handle Wisconsin and, yes, Michigan State at home.

Good read on Ohio State safety Tyvis Powell, who has matured in a captain playing in a good Buckeye secondary.

"My first impression was that I thought he was kind of a clown," OSU co-defensive coordinator Chris Ash told the Northeast Ohio Media Group this summer. "Because until you really get to know Tvyis, that's the impression you get. Because he is very intelligent, he's very witty and he makes good jokes."

This will be a very good Buckeye defense with Powell and Vonn Bell at safety.

I got a chance to meet with Wisconsin strength coach Ross Kolodziej during our camp tour. He is impressive and is reshaping the Badger roster.

Madison.com notes that the hiring of Paul Chryst as the 30th coach in program history meant not only the return of a recognizable - and successful - offensive system, but also the arrival of a familiar approach in the weight room for some of UW?s veteran players.

?It seemed much more like the old days,? senior wide receiver Jordan Fredrick said. ?It was much different. As a whole, it felt much better.?

?It?s just kind of a new vibe in there and it?s kind of refreshing and exciting for everybody,? junior center Dan Voltz said. ?We had a great summer. Guys busted their butts and it?s carried over into camp.?

Michigan opens 2015 with a game at Utah on Thursday. And Jim Harbaugh admits "We have ground to make up.?

Nick Baumgardner of Mlive.com notes that the Wolverines haven't won a Big Ten title since 2004, they've suffered three losing seasons since 2008 and their chief rivals — Ohio State and Michigan State — are currently the top two teams, respectively, in the conference. During a portion of his interview with FOX Sports 1's Dave Wannstedt, Harbaugh discussed the team's current situation.

"We have ground to make up," Harbaugh said. "You ask me to evaluate where our team is and where the rest of the Big Ten is, we've got to make up ground.

"Ground's a hard thing to make up, and that's what we're working extremely hard at."
You know what that means: more sateliette camps.

Indiana hoops continues to see players have issues off the court. Gregg Doyel of IndyStar.com has a good look at the issues: It?s everybody?s fault, he says. No doubt, the run of incidents is concerning. Something within the program needs to be tightened.

Purdue will be the second-to-last Big Ten school to kick off, playing on Sunday at Marshall. Until then, enjoy these 15 fun facts about the 2015 Boilermakers.