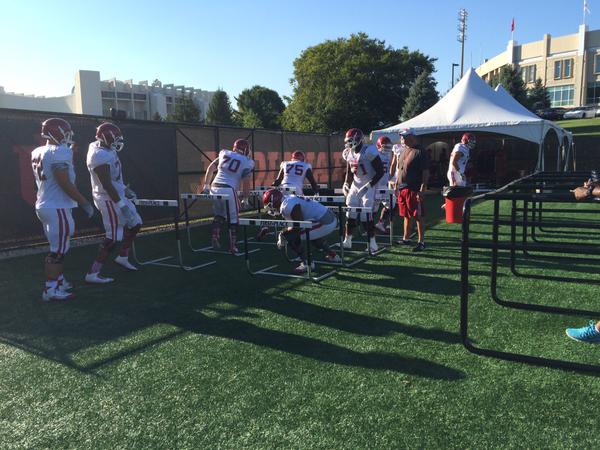 The BTN bus has left Indiana practice, and now it?s time to share some nuggets I gathered while watching the Hoosiers in action Monday morning.

There is a football attached to a spring on a pole on both sides of the entrance to the practice field. As defensive players walk onto the field, they slap at the ball. Hey, it?s all about getting used to creating turnovers.

This season, Kevin Wilson has altered his practice routine, having the team go hard early and taper down as the practice goes on.

This was one of the more spirited stops on the tour. Lots of energy from the players and staff throughout.

Indiana finished practice with some fun, setting up a slip-and-slide in Memorial Stadium for the players.

Hoosier A.D. Fred Glass watched practice for a bit. He?s one of the ?good guys,? a smart man who has made this program better.

The ?bandit? spot on this defense is key. That player, a hybrid linebacker/end, needs to get pressure. Senior Zack Shaw and redshirt freshman Nile Sykes are on the spot. Sykes inked with Notre Dame coming out of high school.

The secondary is a concern, as youth riddles the unit. The top three corners are sophomore Rashard Fant, sophomore Ben Bach (a former walk-on) and sophomore Noel Padmore. The top two safeties are sophomore Chase Dutra and sophomore Tony Fields. The loss of safety Antonio Allen hurts. He was arrested in the offseason, dismissed from the team and transferred to FCS Indiana State. He was the best player on defense. Now, IU?s top defenders are sophomore LB Tegray Scales and junior DE Darius Latham.