Twitter: Get our team's tweets from Ohio State football practice 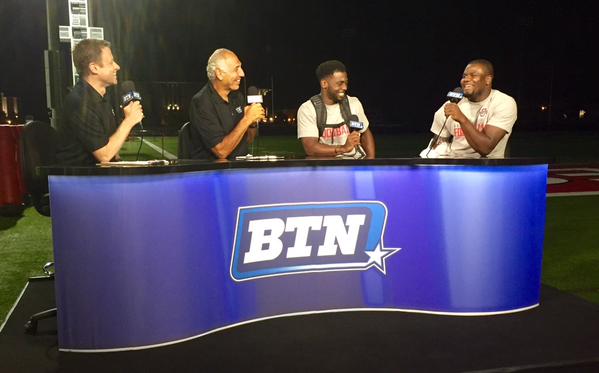 The reigning kings of college football have it all going on, as Urban Meyer features a loaded roster this season. This marked the 12th stop on our annual football tour across Big Ten country.

After the Buckeyes' practice, our bus hit the road, en route to Bloomington, Indiana.

Hard to know where to begin when praising the Buckeyes. They are as physically impressive a group as we've seen in our 9 yrs of camp tours

OL won't miss a beat with Chase Farris. Watched him for 5 straight snaps on inside drill - more than held his own.

Rolling out of Columbus on our way to Bloomington. Great practice from Buckeyes - focused and sharp - not one bit of complacency in sight

I can see why OSU coaches have been raving about Noah Brown - he is going to be a really tough match-up for an average sized CB. Big & fast

If you want to nit-pick - might have minor concerns at DT and back-up RB. But, truthfully, season will come down to mental prep & focus.

BTN Bus Tour #Buckeyes No sign of complacency at last nights practice or at spring practice. It looks like full speed ahead in every area

Taylor Decker leads the @OhioStAthletics o-line, a unit rivaled only by @MSU_Football in the #B1G. pic.twitter.com/aZSHOURoKY

Who will be the deep threat for @OhioStAthletics? Michael Thomas is the guy. pic.twitter.com/qDELDxRFKY

@OhioStAthletics RB Ezekiel Elliott is pleased after affixing his John Hancock to the @BigTenNetwork bus. pic.twitter.com/qYWuPXJjXQ