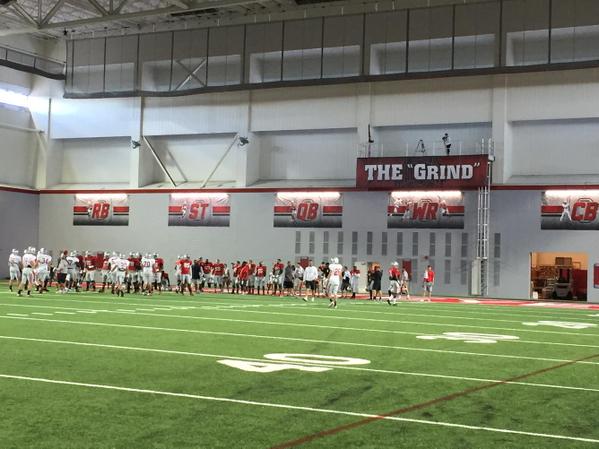 The BTN bus has left Ohio State, and now it?s time to share some news, notes and nuggets from the Buckeyes practice.

Tim Beck arrived from Nebraska and is co-offensive coordinator. He?ll work with offensive coordinator Ed Warinner, who will call the plays with Tom Herman off to coach Houston. Beck will work from the press box and Warinner will be on the field. Beck and Warinner worked together at Kansas under Mark Mangino, pushing the buttons on some explosive offense. The 2007 KU squad won the Orange Bowl. But Warinner told me after practice that the 2008 Jayhawk offense was better.

Miss Ohio 2015 Sarah Hider attended practice in a white dress. She even wore a sparkly crown. She posed with players for photos afterward.

Freshman OL Isaiah Prince was the first to lose his black stripe on his helmet. Prince could see action this fall. He?s part of a promising collection of Ohio State freshman linemen that also includes Branden Bowen, Grant Schmidt, Matthew Burrell and Kevin Feder. DT Robert Landers was the first freshman on defense to lose his stripe.

Yes, Ezekiel Elliott is the No. 1 back, but he told me after practice that he?s not sure who his backup is. Senior Bri?onte Dunn has had a nice camp. And junior Warren Ball got a lot of reps at practice tonight.

@OhioStAthletics RB Ezekiel Elliott is pleased after affixing his John Hancock to the @BigTenNetwork bus. pic.twitter.com/qYWuPXJjXQ

Redshirt freshman DE Sam Hubbard has been lauded by many as a special talent. And, you don?t have to watch him long to see why. Yes, he has skills, etc., but his work ethic is what really stands out. At 6-5, 265, Hubbard looks like Joey Bosa?s brother.

How does Ohio State replace DT Michael Bennett? It won?t be easy. Senior Tommy Schutt is looking good. The light bulb finally may be coming on for Schutt after he arrived amid big hype.

Sophomore cornerback Gareon Conley won a starting job in the spring. And, he hasn?t looked back. At 6-0, 195, he?s a nice combo of length and athleticism who will form a good duo with sophomore Eli Apple, who may be the lock-down corner but didn?t see much action in the practice we saw. Sophomore Damon Webb did. How good is the safety duo of juniors Vonn Bell and Tyvis Powell? Really good. The rangy Powell is a leader, too. Bell is a future pro.

Don?t sleep on senior TE Nick Vannett. He could have a big season. He?s a nice-sized target who moves well and can block. The guy ran well today and had some nice catches.

Some have wondered if the 2015 offense may be the best ever at Ohio State. Maybe. But, the 1995 Ohio State team had a great attack with WR Terry Glenn, TE Rickey Dudley, RB Eddie George; QB Bobby Hoying and OT Orlando Pace, among others.