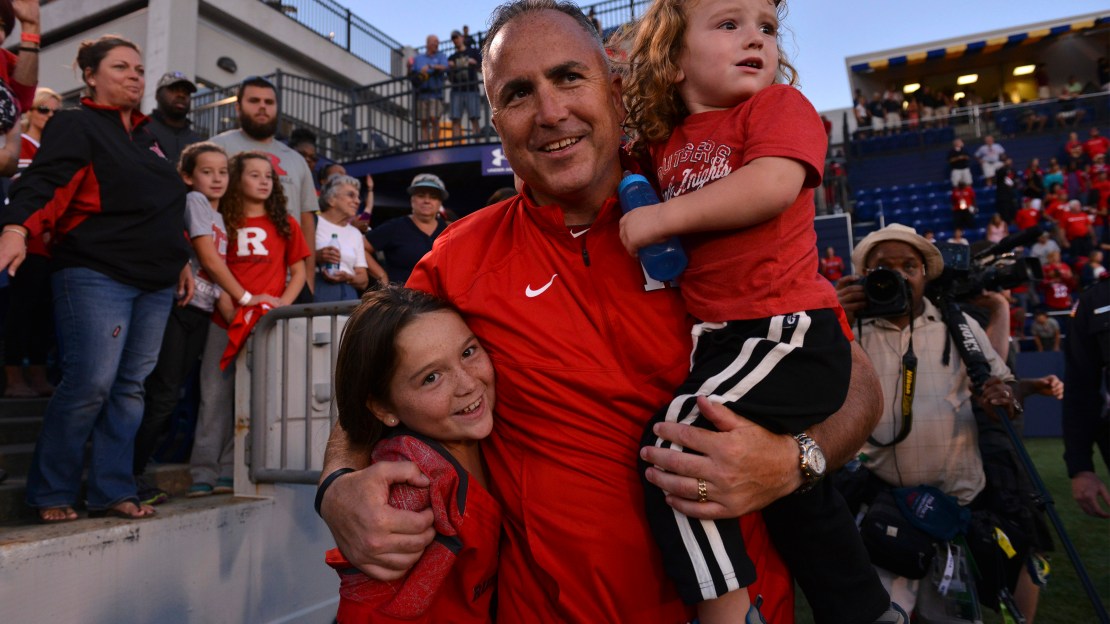 The annual summer trek through Big Ten country continues as the 11th stop on our tour brought us to Rutgers where we watched the Scarlet Knights scrimmage Saturday night.

Here are the fives things I learned at Rutgers.

1. The defensive line should be good. End Kemoko Turay was a revelation last season in his debut, but he missed Saturday?s scrimmage with injury. Senior Darius Hamilton, who could be one of the best tackles in the Big Ten, also didn?t play Saturday. He lacks great bulk but is quick off the ball. RU needs both of these guys 100 percent. Sophomore tackle Sebastian Joseph is a good anchor inside. The guy is a specimen. Senior Julian Pinnix-Odrick can hold up vs. the run. Sophomore Myles Nash comes off the edge. A concern: Is there enough heft to withstand the physical poundings some teams will administer?

2. The scrimmage on Saturday was used to help clear up the quarterback spot, which needs to settle. This was a chance to seize the job for someone. Alas, I don?t think much was decided. Kyle Flood told me before practice he?d like to make a decision next week. We shall see. Perhaps he?ll play both sophomore Chris Laviano and sophomore LSU transfer Hayden Rettig early in the season. Each has a similar skill set and is competent at moving the ball. Each had their moments in the scrimmage. The signal-caller needs to complete some passes down field to create running room for what should be a good corps of running backs.

3. The offensive line is in flux but it looks the part of a Big Ten unit. Senior left tackle Keith Lumpkin is the bellwether on the edge. At 6-8, he?s a towering presence with great athletic ability. He could be one of the Big Ten?s best and a future pro. He was a one-time top prep basketball player. And his athletic ability shows. Lumpkin started next to sophomore left guard Dorian Miller. Junior Derrick Nelson was at center. The right guard was junior Chris Muller, a brawler on the interior who can play multiple spots. Junior J.J. Denman arrived amid hype and looks poised to finally deliver at right tackle. The second unit had from left to right redshirt freshman Zack Heeman; redshirt freshman Tariq Cole; true frosh Jonah Jackson at center; redshirt freshman Marcus Applefield; redshirt freshman Jacquis Webb. As you can see, inexperience riddles the depth chart. But, again, this is a big, physical group being groomed well by o-line coach Mitch Browning.

BTN Bus Tour #Rutgers Depth on OL was not 2 deep in spring, like most places thats been fixed & looks like development is right on schedule

4. The receiving corps is a strength. To have Leonte Carroo opt to return for his senior season instead leaping to the NFL is huge. He was held out tonight. Junior Andre Patton has nice size and speed and has established himself as the No. 2 man. He could be a difference-maker and showed nice hands tonight. Junior Janarion Grant is a nifty speedster. Junior Carlton Agudosi is intriguing. He?s a 6-6, 220-pound target. He just needs more consistency. TE Tyler Kroft is gone, but RU worked in a lot of options at tight end, including junior Matt Flanagan who caught a TD pass.

Leonte Carroo is being "held out." Not hurt, I am told. Several other good WRs. I like 6-6 Carlton Agudosi. Patton and Grant nice targets.

5. The secondary is coming together, but the situation at cornerback is scary. Lanky true freshman Blessuan Austin and sophomore Dre Boggs are the projected starters at corner for this inexperienced unit. Austin is a rangy and long cover man. The starting safeties on Saturday were juniors Delon Stephenson and Davon Jacobs. Kiy Hester, a Miami (Fla.) transfer with speed and skills, sat out.