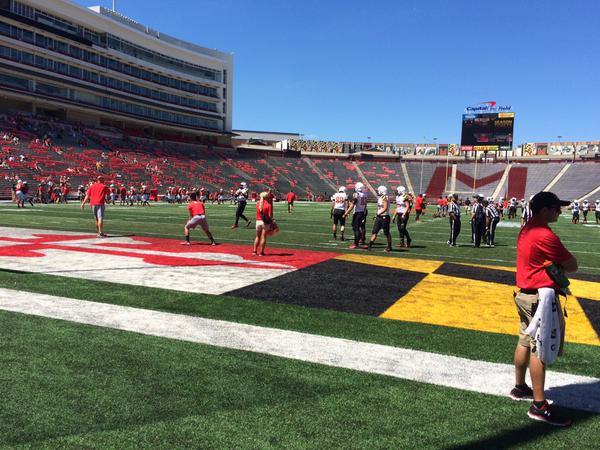 The BTN bus has left Maryland, and now it?s time to share some nuggets I gathered while watching the Terrapins scrimmage Saturday afternoon at Byrd Stadium.

Senior Brandon Ross and junior Wes Brown are battling to see who will be the No. 1 running back. Each took turns rotating today. Ross limits mistakes, which is a trait the staff likes. Brown is a physical specimen who is still looking to hit his stride. Is either a top back? Depth was hurt when Jacquille Veii and Albert Reid transferred. Keep an eye on true freshman Ty Johnson. He?s quick and had some nice runs today. This rushing game must improve. The Terrapins averaged just 121.8 yards on the ground, finishing 12th in the Big Ten. Ross had the lone 100-yard performance by a running back, and that came in the regular-season finale.

Brandon Ross is one half of a good RB duo for @umterps, who must run better. pic.twitter.com/JOSWOS4G8r

In the middle of last year, star junior DE Yannick Ngakoue met with K Brad Craddock, who helped Ngakoue organize his day. And, it has paid dividends in how he prepares. It is about building a daily regimen and sticking with it. Ngakoue has called it life-changing. Ngakoue also got pass-rushing tips in the offseason in Georgia from ex-Falcon Chuck Smith.

This gives you a sense of the speed of @umterps DE Yannick Ngakoue, who is poised for a big year. pic.twitter.com/tUNItkDU4T

The loss of projected stating junior OLB Abner Logan to a season-ending knee injury hurts. The unit already was replacing four starters. UConn transfer Jefferson Ashiru fills one outside spot. And sophomore Jermaine Carter needs to be more of a leader from his middle linebacker slot. Senior Avery Thompson was on the other side. This is an athletic trio. Don?t be shocked if true frosh LB Brett Zanotto plays.

Is there a better kicker in America than senior Brad Craddock? I don?t think so. The ball explodes off his foot. He is one of several Aussie kickers in the Big Ten, as Rutgers, Penn State, Michigan and Ohio State also have Aussies-all punters. But Craddock told me he doesn?t stay in touch with them.

QB Perry Hills told me he has worked to get more athletic. He moved well today on several runs. He also said he drove home four hours to Pittsburgh often this summer to work with his prep coach on throwing.

Perry Hills tells me he has gotten more athletic. It shows. Save for a bad pick, he looked good today for @umterps. pic.twitter.com/axrnAYSpL2