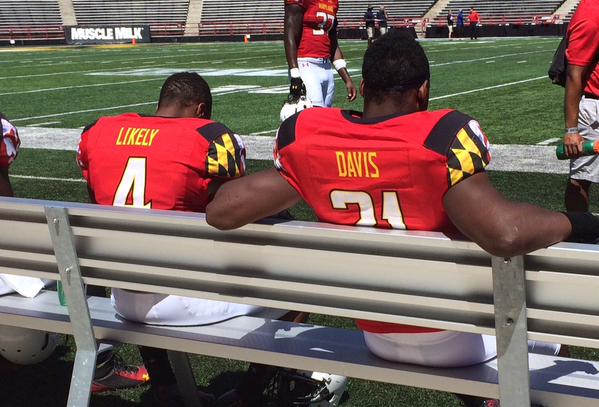 The 10th stop on our annual summer trek across the Big Ten brought us to College Park, Maryland, where we watched the Terrapins scrimmage Saturday afternoon.

Before we turn our attention to Rutgers, which we will watch Saturday night here are five things I learned watching the scrimmage:

1. The offensive line is better and has depth. That?s good, as the front never really has been strong since Randy Edsall has been head coach. We didn?t get to see the unit at full force today, as freshman tackles Damian Prince and Derwin Gray were out. Gray, a left tackle who had a spring shoulder injury and won?t be cleared for contact until Sept. 10, could be a stud. He roamed the sideline without shoulder pads. I did not see Prince, who is competing at right tackle. I was told he is "dinged.? Junior left tackle Mike Dunn also didn?t play but was present. The No. 1 line today was senior Ryan Doyle at left tackle; sophomore Mike Minter at left guard; senior Evan Mulrooney at center; senior Andrew Zeller at right guard; sophomore JaJuan Dulaney at left tackle.

2. Are there playmakers at wideout? Wideout coach Keenan McCardell thinks so. He told me he ?likes his room.? The unit lost some talent in the likes of Stefon Diggs and Deon Long. On top of that, Marcus Leak (left team) and Juwann Winfree (suspended) also are gone. The Jacobs brothers (Levern and Taivon) are back after missing 2014 due to suspension and injury. Junior Malcom Culmer, junior Amber Etta-Tawo, true frosh D.J. Moore, the Jacobs, junior DeAndre Lane were among those playing today. Etta-Tawo made some nice grabs. McCardell says Moore probably will play this fall. True frosh TE Avery Edwards made a good TD grab. He?s a big, good-looking athlete.

Liked the looks of DJ Moore - seems like he'll contribute right away at WR. Edsall also mentioned Jahrvis Davenport as a guy who can help

3. The rebuilt front seven is coming together on defense. Junior DE Yannick Ngakoue is a stud. At times, he can be unblockable as he transitions from linebacker to a ?bandit? position and learns to play with his hand in the dirt. He had 13.5 TFLs last season and is lightning quick off the ball. D-line coach Chad Wilt says sophomore Jesse Aniebonam needs to develop so foes can?t focus on Ngakoue. Junior end Roman Braglio is a non-stop guy on a line that has several players battling back from injury. Wilt likes his tackles. Junior Quinton Jefferson will man one spot, but he missed today with injury. Sophomores David Shaw and Kingsley Opara are a nice rotation on the nose. This defense needs more teeth after ranking 95th in the nation last year (436.2 ypg). And the Terps yielded 30.2 points per game to rank 87th. Randy Edsall told me he feels confident in the replacements that should be better vs. the run in a new 4-3 scheme of new coordinator Keith Dudzinski. The difference between the ACC and Big Ten? "In the ACC, teams liked to run. In the Big Ten, they are committed to it," Wilt told me.

This gives you a sense of the speed of @umterps DE Yannick Ngakoue, who is poised for a big year. pic.twitter.com/tUNItkDU4T

4. Maryland has one of the better corner duos in the Big Ten. Junior Will Likely, who had a pick today, and senior Sean Davis, who was a safety last year and almost opted for the NFL draft, form a great duo. The former's six interceptions last year tied for the Big Ten lead, and the latter's 115 tackles were the most by a Big Ten DB. Davis' move to cornerback created a spot for senior safety A.J. Hendy, who was suspended last year. Senior Anthony Nixon is the other safety. He can hit. The secondary is one of the strongest areas on the team.

As for CB tandems, @umterps duo of Will Likely and Sean Davis is one of the best in the Big Ten. pic.twitter.com/LDVFbxF18a

5. The quarterback spot is interesting. Departed C.J. Brown was one of the team?s top playmakers. Caleb Rowe suffered a knee injury last season and underwent surgery. That continues a trend that has seen him hurt a knee each season on campus. The guy can sling it when he has a chance to set up in the pocket. And coordinator Mike Locksley thinks he?s most well-rounded QB on the roster but lacks consistency. Junior Perry Hills may be the leader of this race. He has increased his athletic ability, and it shows. Oklahoma State transfer Daxx Garman could be a factor but is still learning the system. ?It?s like he?s drinking from a fire hose right now,? Locksley told me. All three have seen significant reps in camp. Randy Edsall would like to make a decision soon on a starter. The Terps need better play from this spot. Again, it may be Hills? job to lose.