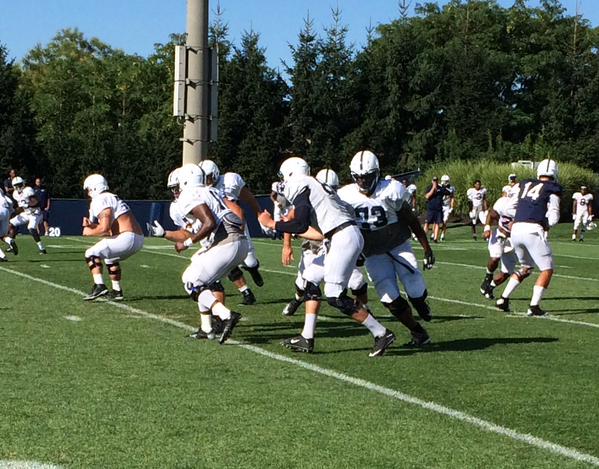 The ninth stop on our annual summer trek across the Big Ten brought us to State College, Pennsylvania, where we watched the Nittany Lions practice Thursday and Friday.

Before we turn our attention to Maryland and Rutgers, which we will watch Saturday afternoon and night, respectively, here are five things I learned at Penn State practice:

1. The offensive line is better. Is it great? No, but it is improved over the unit that yielded 44 sacks of QB Christian Hackenberg last season and often had him running for his life. Depth is much better. Last year, there were about 13 linemen. This year, there are 17. The day we watched practice, the first unit from left to right was junior Paris Palmer at tackle, sophomore Brendan Mahon at guard, senior Angelo Mangiro at center, junior Brian Gaia at guard and sophomore Andrew Nelson at tackle. The left tackle spot is interesting with Donovan Smith gone early to the NFL. Palmer is a JC transfer who at this point looks more like a basketball player than a football player. If he can?t get the job done, it will cause a shuffling of personnel, with Nelson flipping to left tackle and Mangiro to right tackle with junior Wendy Laurent at center. Depth is provided by the likes of junior Albert Hall, sophomore Tom Devenney, senior Kevin Reihner, junior Derek Dowrey and redshirt frosh Noah Beh.

Find out what Penn State QB Christian Hackenberg had to say to BTN Live during the @PennStateFBall training camp. http://t.co/UI0NzHs2rd

2. The running back spot should be good. Junior Akeel Lynch is the vet and is running well. But keep an eye on true freshman Saquon Barkley, one of the team?s top incoming recruits. He?s a 5-11, 190-pound blazer and could end up being the guy in 2015 when it is all said and done. He had some nice runs today. OC John Donovan told me Barkley could be special. Redshirt freshmen Malik Allen, Johnathan Thomas and Nick Scott also figure in. Allen is a mighty mite. Keep an eye on him. Think ?Darren Sproles.?

Saquon Barkley really stood out in practice yesterday - big play waiting to happen. Could be one of the league's impact freshmen

3. The d-tackle tandem of Anthony Zettel and Austin Johnson may not have a peer. Yes, the Nebraska duo of Maliek Collins and Vincent Valentine is good. But it may not be able to match this pair. Zettel was away at his sister?s wedding, although we know what he can do. But Johnson is the man, a true stud who makes this front what it is. He will be the best pro. The 6-4, 322-pound Johnson is a run-stuffer extraordinaire who frequently commands double-teams. Senior Tarow Barney is a load at 305. The end spots lack pizzazz, as the Nittany Lions look for an edge rusher. Senior Carl Nassib is a presence at 6-7 but isn?t especially explosive. Junior Evan Schwan and sophomore Garrett Sickels also are in the mix. Redshirt freshman Torrence Brown could be good. He moves well. Is there a difference-maker anywhere on the edge? Will PSU have to manufacture a pass rush?

See what Penn State DC Bob Shoop had to say to BTN Live during the @PennStateFBall training camp.
http://t.co/pKzHPNPtcW

4. This could end up being one of the better wideout corps in the league. Young talent teems everywhere. Sophomores DaeSean Hamilton and Chris Godwin are bellwethers. In fact, Godwin is the team?s best pure wideout with size, speed, strength and hands. Redshirt freshman DeAndre Thompkins is one of the fastest wideouts. Diminutive true frosh Brandon Polk also is a blazer. Speaking of true freshmen, Juwan Johnson and Irvin Charles look special at 6-4, 215. It?s hoped each can redshirt, but OC John Donovan told me one of them figures to play. Junior Geno Lewis is a veteran presence who made some nice catches today.

5. The secondary will be a strength. Three starters are back with senior strong safety Jordan Lucas, senior corner Trevor Williams and sophomore free safety Marcus Allen, a looming leader who is special. Lucas is a former corner who excels and leads. He?s a future pro. He could be one of the best in the Big Ten. Sophomore Grant Haley is slated to be the other corner with sophomore Christian Campbell pushing him. The staff loves true freshman John Reid, a gym rat who devours film. He will play this fall.

See what Penn State safety Jordan Lucas had to say about being a @PennStateFBall team captain this season. http://t.co/itKHifAZ0J