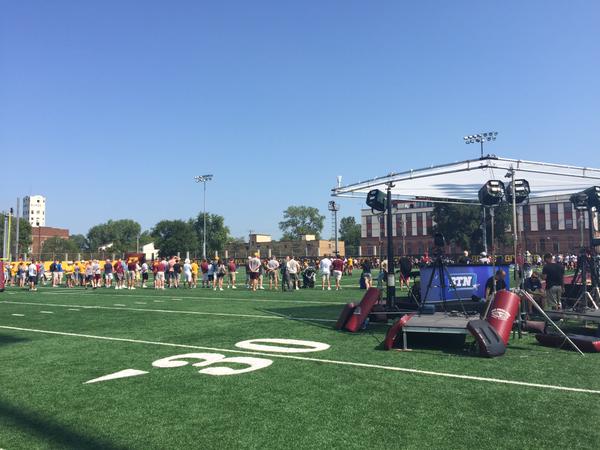 The BTN bus just left Minnesota practice, and now it?s time to share some fun nuggets I gathered while I watched the Golden Gophers practice the last two days.

Defensive coordinator Tracy Claeys raved to me about CB Eric Murray. Claeys went so far as to say Murray is by far the best player in the secondary and the best he has coached. ?The guy has the intangibles that make him special. He?s the total package,? Claeys said.

Another impressive freshman is Tyler Moore, who may push for playing time at center. OC Matt Limegrover says Moore was very well coached in high school. In fact, his line coach last year in high school was Ben Wilkerson who is now assistant OL coach with the Chicago Bears.

When Minnesota runs its up-tempo package, it may use ?heavy? personnel with multiple TEs.

According to a football staffer, the following seniors are sure draft picks: CB Eric Murray and Briean Boddy-Calhoun; LB De?Vondre Campbell; DE Theiren Cockran; S Damarius Travis. S Antonio Johnson will be in a camp.

The QB of the future? It is 6-5 true freshman Demry Croft. The kid looks good.

Gophers may have found QB of the future in Demry Croft. He was a bit up and down in team drills - but clearly really talented

This defense is strong from front to back. But if there are concerns, it?s with the pass rush and size up front. Can this front seven withstand the physical pounding the better Big Ten teams can administer? ?I think we are big enough for what we do,? d-line coach Jeff Phelps told me.

There are good options at running back even with David Cobb leaving a big hole after running for 1,626 yards in 2014. Senior Rodrick Williams is the heir. He?s a physical 230-pounder who isn?t special but can get the job done. The guy who could be a next-level talent is redshirt freshman Rodney Smith. He can run and the staff likes the fact he can pass block. Sophomore Berkley Edwards is a third-down-type of back who can split wide, too. True freshman Shannon Brooks impresses at running back. He looks to be most advanced among the new backs.

Sounds like OC Matt @CLimegrover is ok with RB being more by committee. It doesn't seem like there's a David Cobb replacement on roster

Scouts from the Buccaneers, Steelers and Falcons watched Friday?s practice.

It?s fun to watch sophomore d-tackle Steve Richardson, who at 6-0, 291 is a fire plug. Richardson is a ball of muscle who looks like a pro wrestler. He is front squatting over 500 pounds.

One area to watch on defense is middle linebacker with Damien Wilson gone. Everett Williams is battling Cody Poock, a JC transfer who sat out last year after suffering a knee injury. Poock could end up being the guy. He?s a special player.

Junior Hank Ekpe could be a force at d-end.

According to the Minnesota sports information office, tickets remain for the Gophers? season opener at home vs. TCU.

BTN Bus Tour #Gophers After spg prac I thought Minn had most talent in West but now so far its Nebraska.Minn has more skill than ILL/Iowa