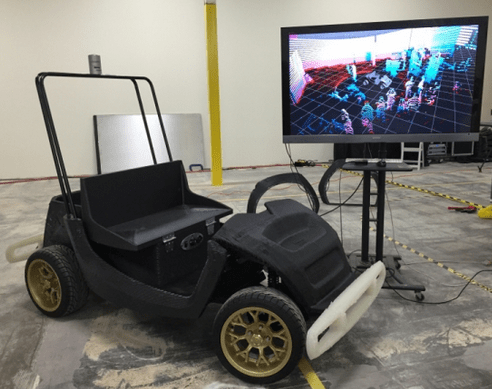 Automotive visionary Henry Ford could see the future. The founder of the Ford Motor Company understood how assembly-line production of vehicles would forever change the transportation landscape. Accordingly, he helped launch the first revolution in automotive mass production more than a century ago.

But what would Ford think of auto developers at the University of Michigan who are now attempting to fill the roadways on campus with cars created from 3D printers? The sound you just heard might be the late Ford rolling over in his grave. 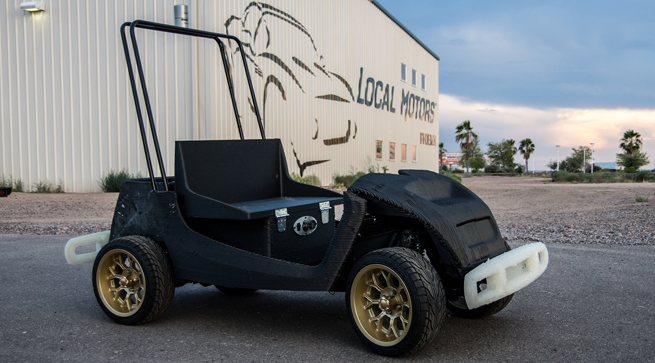 On Michigan?s Ann Arbor campus, Olson is leading an effort to create a driverless 3D-printed vehicle. Called the ?SmartCart,? the first vehicle of its kind was created on July 7 in collaboration with Local Motors (a Chandler, Ariz.-based firm that specializes in 3D-printed cars) and the university?s Transportation Research Institute and the Mobility Transportation Center (MTC).

?It?s basically a golf cart that we are working to convert to drive-by-wire operation,? Olson said of the SmartCart. ?The computer or laptop can step on the gas, push the brake and turn the steering wheel.?

Testing of the SmartCart will take place at MCity, a 32-acre site that recreates Michigan?s roadways and serves as a testing ground for auto-related technology and safety issues. The facility held its grand opening on July 20.

?It?s not like a test track,? Olson says of MCity. ?It?s a robot with sensors and embedded computers. It can even launch mechanical pedestrians in front of vehicles. It?s putting a car through its paces every time a vehicle comes around the track. It makes it exciting.?

With all the advancements in autonomous and 3D-printed vehicles on the Michigan campus, Olson said he sees the robotic SmartCarts serving the school within two or three years if the funding and development continue at the current rate.

[btn-post-package]?The autonomy problems are still challenging,? Olson said. ?But imagine if we can cheat on that and wave a magic wand. How should they look and how should they interface with humans? What are the economic problems? There are a lot of cool algorithmic problems you have to deal with.?

Once the various issues are solved, Olson predicts that Michigan could see ?50 or 100 of these guys buzzing around campus.?

?Maybe you wave at one as it?s passing by and get it,? Olson said. ?I see these guys serving a complimentary role like our bus system.?

And there?s one thing Henry Ford might have liked about them: For the time being, like Ford?s venerable Model T, they only come in black.