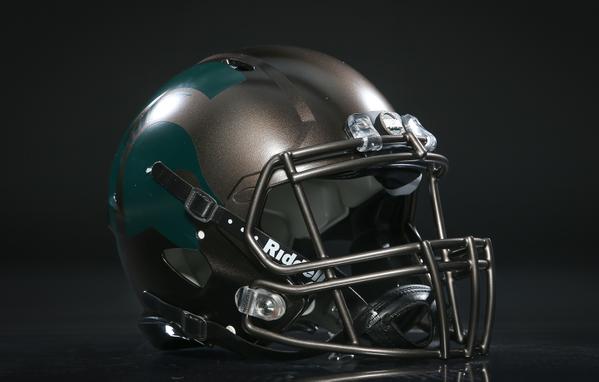 The whole uniform craze has gotten so big in recent years that Big Ten schools dedicate Twitter handles to their equipment, operated, of course, by the equipment staffs.

As a result, our annual preseason Big Ten football uniform feature is no longer just about, well, uniforms.

No, it encompasses the whole get-up, from helmets to cleats to gloves to, even, thigh pads.

Here's a quick look at the new designs that have been announced, the things you can expect to see, and, in some cases, not see (looking at you, Michigan) in 2015.

Editor's note: These are just the designs/updates that have been announced. Teams and their outfitters (adidas, Nike, Under Armour) could announce other designs/updates later.

Nike rebranded the Illini last season, so don't expect a lot of major uniform changes in 2015. There will be this new blue jersey added to the home collection, though.

There will be new gloves and cleats, as well, in addition to school-themed treDCAL thigh pads.

The Hoosiers don't plan on adding any new designs for the 2015 season, although a team representative did say they might introduce a new alternate helmet to an already large collection.

The Hawkeyes released a teaser video to alternate blackout uniforms they will wear Nov. 14 vs. Minnesota. Stay tuned for the design.

Blackout unis hit @kinnickstadium on 11.14.15! Releasing the video that has our players hyped on Friday | #Hawkeyes http://t.co/LzGAm2z8dO

The Terrapins have no shortage of uniform combinations and alternate helmets. At the very least, fans can look forward to new gloves and cleats this fall.

A little preview of some of our @UnderArmour cleats for the season #ALLIN pic.twitter.com/heF1g1W54g

The Wolverines are making a lot of changes in Jim Harbaugh's first year back, none bigger than the announcement that they will be the first college football program outfitted by Michael Jordan's Jump brand.

Also big: Michigan will wear a new all-white road uniform, a nod to the 1974 team.

Michigan, which won't wear any alternate uniforms in 2015, also removed the block "M" from its pants, which are now more of a maize shade. The team is discussing bringing back the helmet stickers it wore during Jim Harbaugh's playing days, and it will have treDCAL thigh pads.

Blue Block M removed from Michigan's pants. Has been on the pants since 1993. pic.twitter.com/hm0MRULa6g

Finally, Michigan has eliminated the Dave Brandon-inspired Legends jerseys that Devin Gardner and Devin Funchess, among several others, wore in recent seasons. Instead, the program will retire the jerseys of eight legends in a ceremony against Ohio State on Nov. 28.

The Spartans are introducing a new set of uniforms this fall. Included in the collection is an all-green home alternate with bronze accents, to go along with an updated primary home design and all-green look, worn for big games in previous seasons.

The away uniform will remain all-white, minus the green accents on the pants.

The team will also have Spartan-themed thigh pads in the rotation.

The Gophers will have these new gloves this fall.

These arrived today! Players are going to love them. #SkiUMah #Gophers pic.twitter.com/Cd86uwuUr2

The Huskers and adidas announced in July a new all-black alternate, to be worn Oct. 24 vs. Northwestern. This isn't the first time Nebraska has worn black, as adidas introduced this design in 2013.

#Huskers to wear #HuskerBold Alternate Uniforms for 10.24.15 game against Northwestern.

Nebraska also has all of these new gloves. And, the 2015 game jerseys recently arrived.

The Wildcats haven't announced any dramatic new designs, but they can rival just about any team when it comes to combinations.

The Buckeyes, who wore Nike alternates during the inaugural College Football Playoff, have not announced any plans to wear alternate designs.

There is one minor change: The seven Buckeye leaves on the back of the jersey collar, signifying the program's national championships prior to last season, have been replaced by "Buckeyes."

Out with the Buckeye Leafs, in with "BUCKEYES" on Ohio State's jersey collars this year. http://t.co/dqLqEF66jE pic.twitter.com/yipwVpuEpJ

There's also rumors about a black uniform, perhaps the one caught on Urban Meyer's desk last year, to be worn under the lights Oct. 17 vs. Penn State.

The Nittany Lions are going back to their iconic nameless jerseys, which they last wore in 2011, before Bill O'Brien added the nameplates in 2012 to honor the players who stuck with the program through the NCAA sanctions.

The team made the move "to pay homage to the history of Penn State football and return to the tradition that represented Penn State for 125 years."

A couple other changes: Penn State will have an updated Nike collar and the back of its helmet reads "Nittany Lions" instead of Riddell.

The Boilermakers and Nike released the all-gray alternate below in April.

Also, in April, Purdue announced it will add a new white alternate helmet.

Our new alternate white helmet was just unveiled to everyone at the Spring Game! #BoilerUp pic.twitter.com/JNgn2VxGY1

The Scarlet Knights haven't announced any updates as far as uniforms, although they will introduce these cleats.

New Vapor Untouchable for the season from @nikefootball ???? @RFootball pic.twitter.com/HmCEmCj6iG

The Badgers have moved on from the adidas techfit jersey and put TV numbers back on the jersey shoulders.

We see you, Drew Meyer. ? pic.twitter.com/jMaio4TNfH