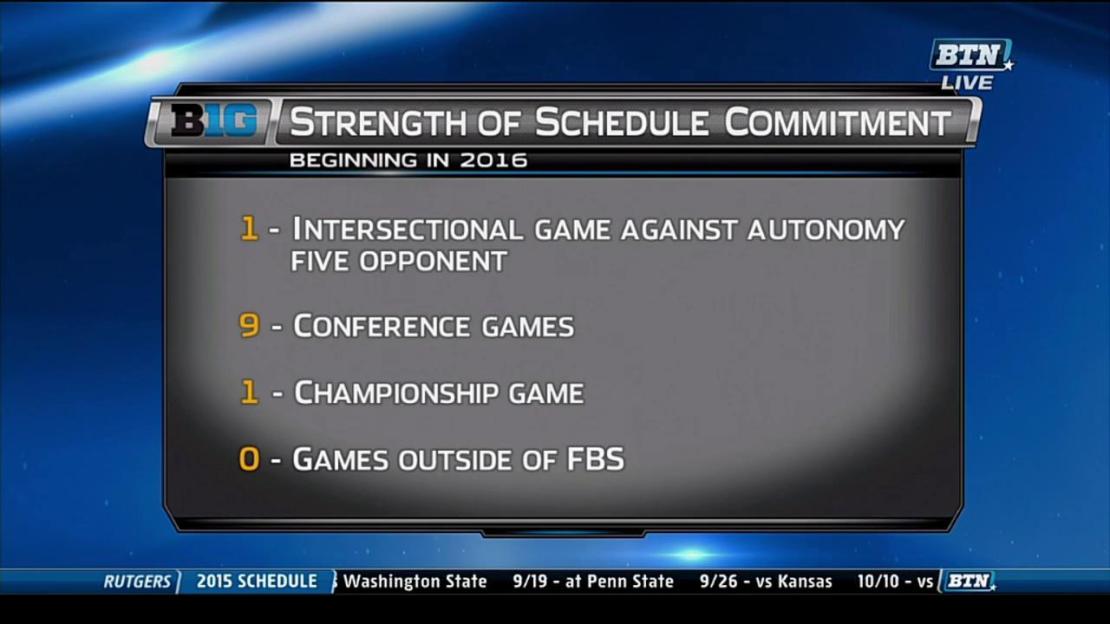 Change has been constant for the Big Ten in recent years. There have been historic NCAA reforms headed by autonomy for the ?power five? conferences and coming stipends to student athletes. The league also recently folded in two new schools in a push eastward.

Regardless of the direction of college athletics, Big Ten commissioner Jim Delany has been the vanguard. Challenges still loom. What?s the biggest?

?I think the biggest issue is to find that sweet spot where you can really execute the educational experience for the student-athlete and find the right balance between a student experience and an athletic experience in a way that allows lots of young people to have rich and sustainable experiences,? Delany said.

?Broadly stated, it?s about identifying the sweet spot where education and athletics can come together in a way that is supportive of a lot of students. I think that is where we have made some progress, but I think we have work to do.?

A lot of that work comes in being sensitive to time demands of student-athletes. And coming ?cost of education stipends? are on the horizon, too. Paying for those will be a challenge for some leagues.

?For us, it?s doable. I think it stretches it. We have more athletes, more scholarship money. We are committed to $200 million in direct financial aid. So if you use a 10-percent figure, that?s somewhere between $20-25 million. There are no new dollars. Some people don?t have it.?

No doubt, big TV contracts help the Big Ten pay its bills. And the conference soon will begin negotiating a new deal, as the current one is set to expire after 2016-17.

How much could the deal be worth?

?No idea,? he said. ?We have done our preparation and due diligence. We are confident. That?s why you go through the process.?

Delany?s push of the Big Ten to the East with the additions of Rutgers and Maryland has enhanced the league?s TV profile. And, the integration eastward last year pleased the nation?s longest-tenured commissioner.

?I thought 2014 was the Year of the East,? said Delany. ?I thought we got real traction out there. We got BTN distribution before the two schools officially came in. Penn State, Rutgers and Maryland all were in the top 10 in the country in attendance growth. We were able to establish events out there. ?

?Most important, the players and fan bases embraced the competition. And that has benefitted us. We are in a new region, but I feel we have traction now in those new communities.?

The Big Ten has plenty of traction entering 2015. Delany?s league is riding high, as Ohio State is coming off a national championship-the conference?s first since 2002. And the Buckeyes look like the favorite in 2015 after marching through the new four-team playoff last season.

?I thought (the playoff) was an artistic success, a competitive success, a financial success,? said Delany. ?I was glad the students and their families could attend the championship game. In every way, I thought, it had to be viewed as a success. The highest-rated games in the history of cable, four really good teams, great venues. I thought the committee managed its affairs exceptionally well.?

Should the playoff expand beyond four teams?

?Length of season, the number of games, the academic calendar, the wear and tear on players ? I think four is the right number,? said Delany. ?It wasn?t easy to get here. We need to run through the contract and have that experience (before making any decisions).?

Delany also sees no need for standardized scheduling across the major conferences.

?I think it would make it easier,? he said. ?But the committee has made it fairly clear what the data points are that matter to them. Winning championships matter, playing a good schedule. We will do all we can.

?We have something called 1910. We think we have come up with a conference plan. We have one championship game, we have nine conference games (in 2016). We have one intersectional game vs. an autonomous opponent and we have zero games vs. FCS. They are all vs. FBS starting in 2016.?

Delany has the Big Ten rolling as 2015-16 dawns. The league won 10 national championships last season and had 17 different teams from 11 different schools play in championship or Final Four-type of games.

?Our athletes, schools, expansion, BTN all had very successful years,? said Delany. ?I give credit to the teamwork that exists among presidents, athletic directors, coaches, and faculty. This doesn?t happen in a vacuum. We have to make good healthy decisions to get this kind of activity.?

Since things are going well and the landscape appears to be stabilizing, is expansion a possibility?

?Things seem to be calm,? said Delany. ?There are so many issues that we are dealing with now. Most of us are absorbing the change and preparing for the future. We had added cost of education and committed ourselves to dealing with the time demands. And the conference has committed to no reduction in aid during the term of its award. And there is a return-to-achieve a degree if it was interrupted.

?I think we are moving toward that sweet spot. We still have challenges but are making good progress. We have to be prepared to make more, too.?