Keith Nichol Q&A: Looking back at the play known as 'Rocket' 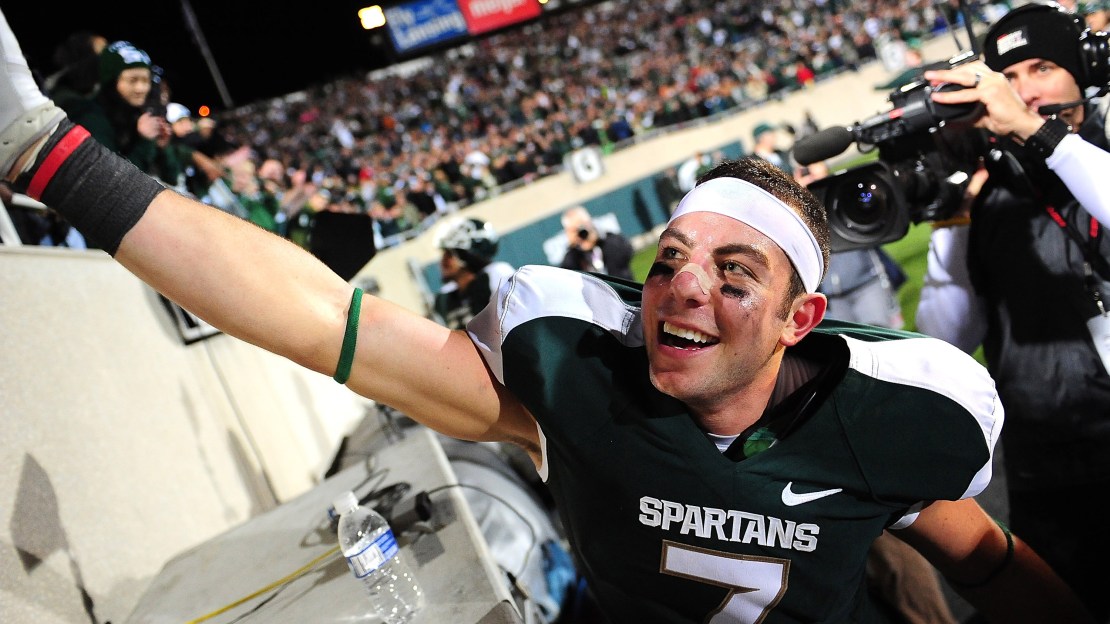 It was nearly four years ago that Keith Nichol was part of what will be remembered as one of the greatest plays in Michigan State football history.

With MSU and Wisconsin tied at 31 in a late October Big Ten clash, Kirk Cousins heaved up a last-second Hail Mary pass that went off the facemask of B.J. Cunningham and into the hands of Nichol, who fought off two Wisconsin defenders and pushed his way over the goal line.

We're re-airing the memorable 2011 game at 8 p.m. ET on BTN/BTN2Go, part of our Big Ten Classics series, and Nichol will be live tweeting during the replay. Follow Nichol on Twitter, @KeithNichol7, and interact with him during the game.

Mark Dantonio tabbed the iconic play "Rocket," a highlight that will forever hold a special place in Spartan fans and players' hearts. Good thing for replay, because the play was initially ruled short of the end zone, before officials overturned the call after a lengthy review, giving the Spartans the 37-31 win.

I caught up with the former MSU wideout and asked him about that memorable catch.

BTN.com: It has been almost four years since "Rocket." Take me through the play and what you remember most about that moment?

Nichol: I remember when I caught the ball and my initial thought process was that it was for sure a touchdown. I felt like my body went over the end zone. But then when they reviewed it, I began second guessing myself and was just hoping the film caught it.

Nichol: It honestly felt like forever. I remember doing a lot of pacing. I had a lot of teammates coming up to me and asking if I got in, and I just didn't know what to say. I thought I did.

BTN.com: Describe the feeling once the ref overturned the call and announced that it was a touchdown?

Nichol: I remember it was hard to comprehend just how big of a moment it was. It was a huge adrenaline spike, but I felt like I was the last one to figure it out. I just found out from the crowd reaction because I couldn't really hear the ref and then the crowd just erupted.

BTN.com: How often does that catch get brought up in conversation among friends and family?

Nichol: I still hear about it a lot. I have the game ball in my office, so people bring it up a lot there. My friends will sometimes introduce me as "that guy who made the catch." They still show it to a lot of people on YouTube. I see the highlights and replay all the time.

BTN.com: After that game, I'm sure you had a lot of phone calls, texts, interviews, ect. What was the most memorable one?

Nichol: I?m from the Grand Rapids area and lived in East Lansing, so I really wasn't familiar with any of the radio stations outside of that area. I remember, Mojo in the Morning, a Detroit radio station, called me for an interview. I didn't really think anything of it at the time, but afterwords, I had a ton of people telling me they heard my interview and that is the biggest sports radio show in the state. I had no idea.

BTN.com: You worked out for both the Washington Redskins and the Chicago Bears. Did anyone from those organizations talk about the catch?

Nichol: Oh yeah. In fact, RGIII (Robert Griffin III) mentioned it right when he saw me for the first time. That was the first thing he said to me, and we hit it off after that.

BTN.com: That 2011 team went 11-3, played in a Big Ten championship and beat Georgia in a bowl game. How does that team compare to more recent MSU teams and what do you credit for the Spartans' recent success?

Nichol: We had a really smart, experienced quarterback when we were there in Kirk Cousins. We had Le'Veon Bell running the ball. We had a phenomenal defensive line and a very good 0-line, and that's the same story for this year's team. When you have those things, you're really hard to beat. That's what makes a great football team.