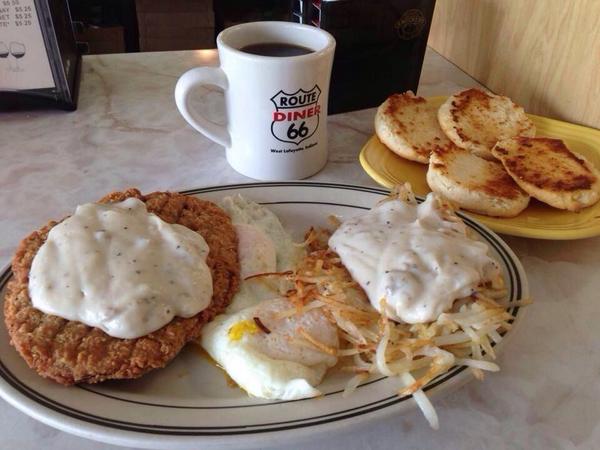 The Big Ten doesn't just boast some of the top fan bases, stadiums and campuses in the nation. It's also home to some of the best college eateries.

[ MORE: See our celebrity "starting 5" for every Big Ten school ]

Before the 2015 college football season kicks off Thursday, Sept. 3, we went on a search for the top game-day restaurant on all 14 Big Ten campuses. You know, the place where fans, both home and away, go for good food, refreshments and a fun atmosphere, either before, during or after games on fall weekends.

Editor's note: To get the winner for each school, we asked college football writers, Big Ten sports information directors, Big Ten fans (via Twitter and Facebook) and BTN personalities for their input.

See each school's winner below:

Papa Del's
Address: 206 East Green Street, Champaign, IL 61820 (Google Maps)
What they said: "It is deep dish pizza that isn't the same as the stuff you get in Chicago, which I also love." – Bob Asmussen (@BobAsmussen)
Editor's note: Papa Del's will be moving from Green St. to Neil St. at some point this fall.

NBA Finals, B-town beers on special and Stroms: What more could you ask for? See you tonight for tip off! #NBAfinals pic.twitter.com/a4waVi8gUZ

Wig And Pen
Facebook: Wig & Pen Pizza Pub
Address: 1220 Hwy 6 West, Iowa City 52246 (Google Maps)
What they said: "It's a 'pizza pub' that feels like a pub and has great pizza. There's a good chance you'll find a Hawkeye football radio announcer on the night before a home game. Location's great, so is the pizza." – Mike Hlas (@Hlas)

R.J. Bentley's
Address: 7323 Baltimore Avenue, College Park, MD 20740 (Google Maps)
Twitter: @RJ_Bentleys
What they said: "If you're aiming simply for the most notable bar in College Park, it's R.J. Bentley's — there's a lot of Maryland athletics-related stuff in there, and it is what Scott Van Pelt references when he says "Let's go to Bentley's" while narrating Maryland highlights on SportsCenter." – Patrick Stevens (@D1scourse)

Sally's Saloon
Address: 700 Washington Ave SE, Minneapolis, MN 55414 (Google Maps)
Twitter: @SallysSaloon
What they said: "After a year away, Sally's is back on campus and will once again be a busy location for non-tailgating Gophers fans." – GopherHole.com (@GopherHole)

Stop by for our chicken or steak ramen for $2 from 5pm-Midnight every Tuesday! pic.twitter.com/O0ptOFMlDy

Bat 17
Address: 1709 Benson Ave, Evanston, IL 60201 (Google Maps)
Twitter: @Bat17Evanston
What they said: "They have a large space for gamedays and the walls have huge Northwestern-themed photos and murals. Their food is tremendous. They specialize in deli sandwiches and the portions are huge." – Nick Brilowski (@NickBrilowski)

It's #NationalBurgerDay so celebrate right with one of our 10oz beauties topped in so many delicious ways! pic.twitter.com/PhhutjCykf

The Varsity Club
Address: 278 W Lane Ave, Columbus, OH 43201 (Google Maps)
Facebook: My Varsity Club
What they said: "It's iconic within OSU circles, very popular on gameday. They have food (some pretty good pizza and your average bar food) and you'll definitely see a lot of fans from visiting teams there too." – Dave Biddle (@davebiddle)

The Columbus Coast to Coast happy hour has a great turn out at the Varsity Club! #knowltonalumni pic.twitter.com/pp56sPfeAa

Stuff Yer Face
Twitter: @StuffYerFaceNJ
Address: 49 Easton Avenue New Brunswick, New Jersey 08901
What they said: "Iron Chef Mario Batali got his start washing dishes in the kitchen at Stuff Yer Face, home to more than 30 kinds of stromboli. Located in the heart of downtown New Brunswick, it's a Rutgers landmark, complete with framed articles on the rise of football." – Ryan Dunleavy (@rydunleavy)