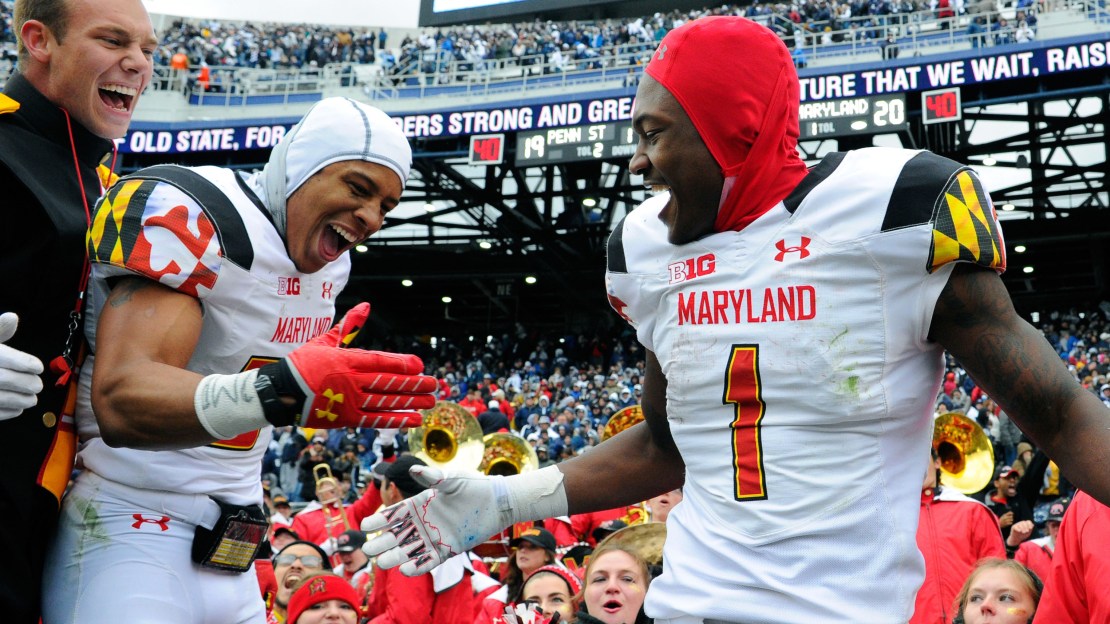 Celebrating our historic first year in the Big Ten, check out our #MDYearInReview! http://t.co/qLSZ5079cV

One year ago Wednesday, Maryland and Rutgers became official members of the Big Ten.

To celebrate the anniversary, we're taking a look back at the top moments from the conference's 13th and 14th members in their inaugural Big Ten campaigns.

We've spotlighted our top moments for each school, in alphabetical order, below:

1. Women's lacrosse wins national championship. It's really tough to top a national championship, and it's even harder to top back-to-back NCAA crowns. The Terrapins went 21-1, with the lone loss coming to Ohio State in the inaugural Big Ten tourney, on their way to claiming a third national title in the last five seasons.

2. Football team wins at Penn State AND Michigan. No, neither team was up to its usual perennial power status, but it's never easy to win at Beaver Stadium or Michigan Stadium, much less doing it in both Big Ten cathedrals in the same season.

T-3. Women's basketball team sweeps Big Ten play. Brenda Frese and company had no trouble in their first Big Ten campaign, ripping off an 18-0 conference record and cruising to the Big Ten tourney title. The Terrapins went on to advance to their second consecutive Final Four, where they lost to eventual champ UConn in the national semis.

Editor's note: We had omitted the Maryland women's basketball team in the first edition of this post.

1. Football team rallies past fellow Big Ten newcomer Maryland. Already bowl eligible and trailing 35-10 late in the second quarter of the regular-season finale in College Park, the Scarlet Knights could have quit. They did anything but en route to scoring 31 of the game's final 34 points to claim the 41-38 victory.

2. Men's basketball upsets No. 4 Wisconsin. Forget that Frank Kaminsky didn't play in this game, because the 67-62 win still goes down as the biggest upset in Rutgers men's basketball history. The previous best was a 1982 win over No. 6 West Virginia. The Scarlet Knights shot 54 percent vs. the eventual Big Ten champs and national runners-up.

3. Football team takes down Michigan for first Big Ten win. It's safe to say that Scarlet Knights fans won't soon forget their first Big Ten win. Not only was it vs. one of the game's top programs, but it came in dramatic fashion as Kemoko Turay blocked Michigan's late potential go-ahead field goal.