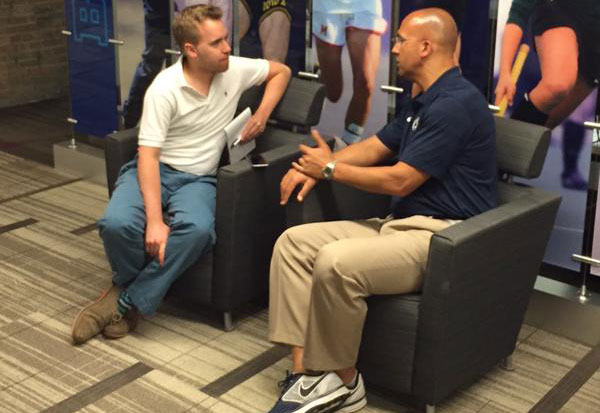 There's never a dull day at the Big Ten Network offices, even in the offseason.

[ MORE: Bob Shoop Q&A: 'You have to experience' Beaver Stadium White Out ]

On Monday, BTN's staff had the chance to entertain the Penn State's football coaching staff.

I had the opportunity to chat with PSU head coach James Franklin, and we played a game of fill-in-the-blank. I started five sentences about Penn State football, and Franklin finished the sentences for me.

We talked about a bit of everything from Christian Hackenberg, to the Nittany Lions' daunting defense, to Franklin's big move from the SEC to the Big Ten.

BTN.COM: This year's upcoming 2015 college football season will be considered a success for Penn State if _______?

FRANKLIN: I never want to look at it in terms of numbers. I want people at the end of the year to say that they are really comfortable with the direction of the program. That has to do with every aspect — academically, athletically, socially, the whole deal. I think we will be better this year. I don't think there's any doubt in my mind.

BTN.COM: The one aspect of Christian Hackenberg's game that really sets him apart from other quarterbacks across the nation is _______?

FRANKLIN: It's like in baseball when you talk about a five-tool guy. He's got all the things that people are looking for in a quarterback. He's 6-4, 235 pounds, he can run a 4.7, he's got a really strong arm, he's got a really good feel for the game and a mind for it as well, and he works at it because it's really important to him. The thing that's great is that now, some of the pieces of the puzzle around him are starting to come into play. So, I think you are really going to start to see some of the things he's capable of. Last year, our whole offense, and a big part of his season, was hiding the deficiencies, or trying to. Now, this year, we are going to try and be a little more aggressive, as much as our offensive line will allow us to be.

BTN.COM: The offensive line will improve this season from last season because _______?

FRANKLIN: Well, it's pretty simple. We had one returning starter last year, and we have four returning starters this year. So, just that returning experience alone helps. We will have a two-deep of scholarship players, which we didn't have last year. The consistency on the o-line and being able to have a two-deep of scholarship players with guys who played and gained experience is going to be really valuable. This group will be bigger, stronger and faster this year. It's just Year 2, which means guys will be so much more confident with their assignments and their responsibilities. They won't be thinking as much, which will allow them to develop.

BTN.COM: Penn State's defense improves from last season to this season by doing _______?

FRANKLIN: We had a lot more depth and experience returning last year on defense. I think we do a great job as a coaching staff as well on that side of the ball. We played a lot of guys on defense last year, so even guys who weren't starters, they played a lot, so they will have bigger roles this year. On top of that, were going to be in a situation where they are just going to know the scheme better. Offense, defense and special teams, we return our entire coaching staff, so there is consistency there. Plus, not just on defense, but across the board, as coaches, we know our players better, and as players, they know their coaches better. There's just a better understanding, feeling and expectation of what we do.

BTN.COM: The biggest difference you have noticed in coaching in the Big Ten compared to the SEC is _______?

FRANKLIN: I think I'll have a better idea after Year 2. I have only really seen four or five Big Ten stadiums. So, until I get an opportunity do go to all the different venues, which it may take three years to do that, its hard to speak on it. I think the Big Ten is really special. When you think about the narrative and the conversations that were going on a year ago compared to now, with the success some teams have had and different coaching hires, as well as how recruiting is going, there's an excitement now, and there's a buzz about the Big Ten.