Bob Shoop Q&A: 'You have to experience' a Beaver Stadium White Out 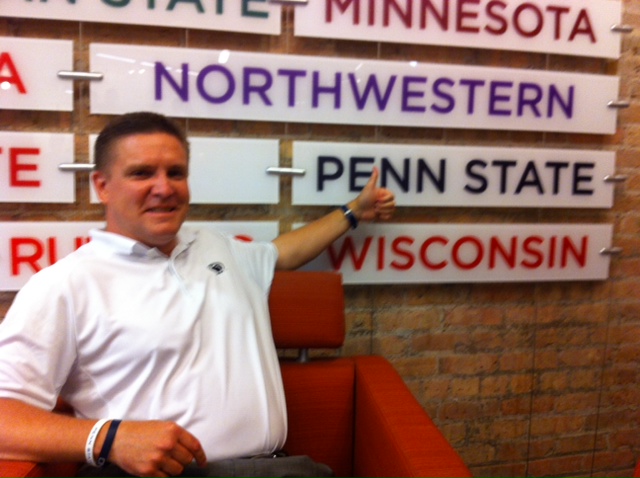 Really enjoyed visiting with @coachjfranklin and his staff today at @BigTenNetwork studios. Great to have them in Chi pic.twitter.com/o2V9j2B36z

That being the case, the coaches spent a little time visiting the BTN studio.

See our full Q&A below:

BTN.com: First off, that wasn't a real tree Anthony Zettel tackled, was it?
Bob Shoop: No, that was a real tree. It was funny, I saw it right after it was on Instagram, and I thought it was hysterical. The legend of Zettel continues to grow. I always tell the story, I've seen him throw a football 75 yards. He says he can throw a baseball 90 miles per hour, and people who golf with him say he can drive a golf ball over 300 yards. He's full of unusual feats, so for him to do something along those lines, certainly doesn't surprise me.

BTN.com: How does a Beaver Stadium White Out compare to other great traditions?
BS: Nothing like it. You have to experience it. I came from Vanderbilt, so we saw all of the neat SEC venues. I've coached in an Army-Navy game, I've coached Yale-Harvard, and I've coached a BC-Notre Dame game. Speaking of Zettel, the loudest I've ever heard a stadium was during his pick-6 vs. Ohio State last year (a White Out game).

BTN.com: Best defensive player you've coached?
BS: You sure can't ague with the type of season Mike Hull had last year, being the Butkus-Fitzgerald Linebacker of the Year in the Big Ten. He really had a special year for us and was as good a leader and had as good of a season as anybody I've ever been around.

BTN.com: How often do you talk to your brother John (Purdue's OC)?
BS: Before we were in the same conference, very often. We don't play each other until 2016, unless we both make it to the Big Ten championship game. Coming into the league, I used him as a resource, and he really helped me with the landscape of the Big Ten. We do exchange ideas, both on players and schemes. Throughout the course of our careers, we've been great resources for one another.

BTN.com: Were the offensive/defensive roles there for you as kids, too?
BS: We were both the same. I was a receiver in college and he was a quarterback. It just ended up that there was an opportunity to be a defensive coach. We actually coached against each other when I was at William & Mary and he was at North Carolina, so he called offense against my defense. That was really a unique experience.

BTN.com: How did you fare?
BS: We lost, 21-17. Anytime you're a I-AA program playing against a team like that, it's like a Super Bowl. It was a great day and a great experience.

BTN.com: How about a Penn State defensive player who is about to become a household name?
BS: I think the guy that is really special is Austin Johnson. Anthony Zettel gets a lot of credit, and deservedly so, but Austin Johnson is the next in that long line of Penn State defensive linemen. He's built more in the mold of guys who have gone on to great success in the NFL. It wouldn't surprise me if he and Anthony give us as good of a tandem up front at defensive tackle as anyone in college football.

BTN.com: What's it like facing Christian Hackenberg every day in practice?
BS: Awesome. We love challenging ourselves against Hack and that great receiving corps. One of Coach's core values is compete in everything you do, so our practices are fiercely competitive. I can tell you, the first spring ball of 2014, the first day, I stand behind the secondary in practice, and when I saw the ball come out of Hack's hand, I'd never seen anything like that before in my life. He and I have a great relationship. I was actually the GA at Virginia when his dad was the quarterback, so I've known who Christian Hackenberg was for a long time. He and I have become very close; this summer, we started to watch film together, just to go over what you're looking for here and what you can do against this defense. As good of a player he is, he's a better person.

BTN.com: You're a smart man, a Yale graduate. What's the biggest thing you learned at Yale?
BS: I'm an economics major from Yale, so there's not a lot of my economics degree that I carry over on a day-to-day basis. The thing that was unique about my time at Yale is that I met people from all walks of life, all different backgrounds, all different religious backgrounds, and that diversity piece that I learned while I was there, it carries with you. When you coach college football, it's about relationships, it's about communication, it's about understanding what motivates people, understanding that people are different, that they learn differently, that they are motivated differently.

BTN.com: Do you have a favorite behind-the-scenes James Franklin story?
BS: I tell this story all of the time. Our first year at Vanderbilt, we're doing a two-minute drill, and the offense is doing it on one field and the defense on another field. He asked if he could be quarterback. About three plays in, yeah, he's playing quarterback, and he threw an interception. Andre Hall, our All-SEC corner – he now plays for the Houston Texans – picked it off and was running it back for a touchdown. Coach chased him down and literally left his feet and tackled him on the sideline. I've never seen him so angry. He literally beat two blocks, chased him down the sideline and made a lay-out tackle. He got up and said, "Let's do the drill again!" That story is 100 percent true.

BTN.com: OK, how about your favorite person to follow on Twitter?
BS: If I have to pick someone, it's the top prospects in the 2016 class and our current players. That's who most of my follows are!