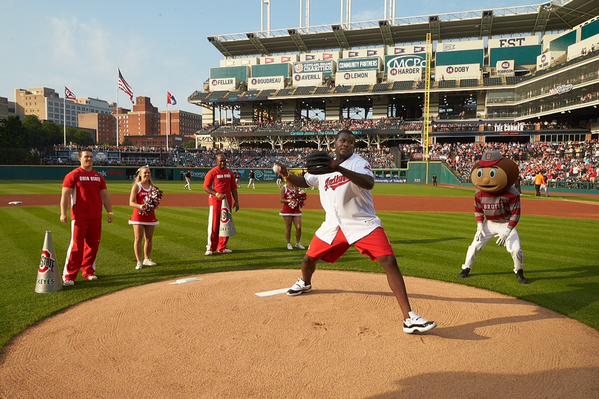 Everyone knows Cardale Jones has a strong and accurate arm on the gridiron. But what about on the diamond?

[ MORE: Check out all of our Gone Viral posts ]

The Ohio State national championship quarterback threw out the ceremonial first pitch Friday night at the Cleveland Indians game vs. the Baltimore Orioles.

Jones got the ball to the plate, avoiding a 50 Cent moment, but it was just a little bit high.

His catcher, of course, was former Ohio State baseball star and current Indian Nick Swisher, who got out of his crouch to catch Jones' pitch.

If you remember, Jones tweeted his way into throwing out the first pitch early last month, this after running back Ezekiel Elliott did the honors.

Cardale throwing out the first pitch in his hometown at the Cleveland Indians game pic.twitter.com/xWh2pxV20H