A race to remember: 'I had no idea I fell like that' in inspirational 2008 run 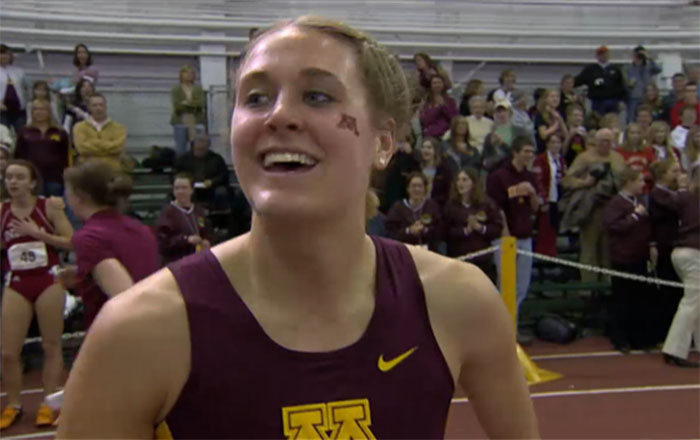 Before you lace up the shoes to go for a run to acknowledge the day, BTN.com has a fun look-back at one of the more memorable moments in recent Big Ten track & field history.

It happened in the 2008 Big Ten indoor event in Minneapolis — more specifically, the 2008 women's 600-meter final.

On the second lap of the race, Minnesota's Heather Dorniden, now Heather Kampf (@HeatherRaeKampf), fell to the track and still managed to take first place, a wild sequence that made her a "YouTube sensation," as she so perfectly describes it.

BTN.com recently caught up with Kampf for an email Q&A to relive the race and talk about her running career.

BTN.com: You've probably answered it a thousand times, but what happened on your inspirational run?
Heather Kampf: I was making a move to pass Fawn Dorr of Penn State going into the last lap of the Big Ten 600m final, and probably just didn?t account for enough space for my long stride, because I felt my heel get clipped once, and then on the second time I knew I was going down.

BTN.com: In a weird way, did the fall almost give you added adrenaline?
HK: I?m sure it did give me some extra adrenaline, but honestly I think it was the presence of the fans and my teammates who also had put everything they had on the track that weekend that gave me the extra gear. After I fell, it was as if a vacuum had sucked all the energy out of the place; then, as I started to gain momentum, it was like a crescendo of noise and excitement, all the way to the finish line. Just the stark contrast from that moment of loss to the surprising victory made the whole experience really surreal.

BTN.com: What was going through your mind as you fell?
HK: Maybe I just closed my eyes tight throughout the process of skidding to a halt on my stomach, or maybe the positive vision of what I was hoping to accomplish in that race was stronger than the adversity I faced, because I had no idea I fell like that. The first thing I remember seeing after feeling like I was falling was seeing my hands on the track when I was pushing off to go again. I figured I had just bent down at the waist, touched the track and kept running. I do remember thinking, ?Well, that?s never good?? (to have your hands on the track surface in the middle of a race).

BTN.com: And as you got up?
HK: Since I didn?t think I fell as hard as I did, I was shocked to see how much of a gap had formed between me and the rest of the race. At that point in the meet, I knew the point scores were close for the team championship, so all I really thought was I need to keep running, because if I finish I?ll at least earn one point. As I started running, I began to gain on one girl, and then the rest of the pack didn?t seem that far away. I thought, "Wouldn?t it be cool if I caught them all?"  Then, on the final curve, I heard the in-house announcer say, ?Watch out for Heather Dorniden!!? and I thought, "Yeah!! Watch out! I?m coming!" And from there, it was just this incredible surge of energy and an effortless press for the finish line.

BTN.com: How about when you crossed the finish line?
HK: As I crossed, I wasn?t even sure if I got the win. I waited for the times and names to come up on the video board, and was shocked to see that I had, in fact, pulled ahead of my teammate to win that heat. My coaches ran over to give hugs and high fives, and all I could think to say was, ?I didn?t expect that!!? Haha, in hindsight, I?m sure they didn?t either.

BTN.com: Was that the most gratifying moment of your athletic career?
HK: That race is definitely up there. If you asked me that day, I would have said I don?t know why everyone is making such a big deal of it because I still didn?t have a clear vision of how everything happened until I watched the video myself for the first time. Now that I?ve had plenty of time to allow it to sink in, I?m realizing more and more how special that race was, and what it means to so many other people as well.

BTN.com: Did you meet any cool figures or hear from any following the race?
HK: Yes, I heard from so many people, immediately after the race, and even still today I am contacted on a regular basis by people who found this race so inspiring. CEO?s of companies have written to me to let me know they use the video in their all-company meetings, church leaders have invited me to speak to their congregations, coaches from all over the country have used it to inspire their athletes before big competitions, and even strangers from all over the world have sent me notes.

BTN.com: How often do you think about what you accomplished, and how often do people mention it to you?
HK: It?s certainly not something that comes to my mind independently as much anymore, but I am still reminded by other people quite often. At least once per week, I?d say, I hear from someone who has just realized that I?m the girl from that video, or I meet people who recognize me from it.

BTN.com: What's the best or most memorable thing someone has told you about that race?
HK: What?s probably most powerful to me is the sheer quantity and variety of people with different backgrounds who all have felt compelled to reach out to tell me how this race has affected them. This race is so easily relatable to everyone?s lives. I?ve heard from cancer survivors, people battling addiction, struggling artists, parents, athletes and coaches of every sport, runners of every age and ability?the list could go on. I always tell people this race isn?t just about never giving up, it?s about discovering what you?re capable of when you are given the opportunity to rise above adversity. I would have never guessed that getting up and finishing that race would have made me a "YouTube sensation." Not every fall I?ve had has been quite so epic, but I learned that it?s worth getting up every time.

BTN.com: You're still running these days. Can you update us on what you've been up to since you left the University of Minnesota?
HK: After I graduated, I joined Team USA Minnesota, which is a group based out of Minneapolis focused on supporting developing athletes who are competing at the national and international level. I got picked up for sponsorship by Asics in the spring following my first professional indoor season as well, which was and continues to be so helpful in funding this adventure. As a professional, I have consistently been improving and dropping times in my primary events (the 800m and 1500m). I have gained quite the reputation as ?Queen of the Road Mile" from my success at that distance, as well. Just recently, I won my third USA Championship in that event. I qualified for my first ever World Championships team last year indoors, and aiming to qualify for this year?s Outdoor World Championships. And, of course, the 2016 Olympics would be a dream come true.

BTN.com: If you weren't a runner in college, you would have been?
HK: I was a gymnast before I was a runner, so I might have done that – though I?ve always wished I could be really good a volleyball. I love to play on the beach anytime I?m on vacation!

BTN.com:  Favorite thing about running?
HK: I love the people and the community that surrounds this sport. No matter how fast or slow you run, we can all relate to the dedication it takes to improve, and the joy we all get just by the simple freedom of movement.

BTN.com: Favorite length to run?
HK: As I kind of mentioned above, the road mile is so much fun for me.

BTN.com: Favorite terrain?
HK: Soft, flat trails. I?m not one of those hard-core trail people, but a soft surface without hills is about as good as it gets.

BTN.com: Shoe you swear by?
HK: One of my absolute favorites is the DS Trainer- lightweight, just a little bit of arch support for my flat feet – so great.

BTN.com: Most picturesque route you've ever run?
HK: After the World Championships in Poland last year, I wasn?t very happy with the results. I was tripped again in the Final, and didn?t have an amazing comeback. It was really defeating to feel like I was robbed of one of my greatest running opportunities to date. The next day I went off to run, just run, until I wasn?t mad, and I didn?t feel like crying anymore. I found this incredibly large and beautiful forest and just got lost in it (on purpose). Every once in a while, I?d reach the end of a trail that spit me out onto the beach of the Baltic Sea. Running broke me down, but it was also what helped heal me, so that certainly added to the beauty of that place.

BTN.com: Best song or band to listen to while running?
HK: Honestly, I don?t listen to music much when I run. I?d rather run with friends to catch up on life, or tell stories that result in laughing so hard that we can?t run straight anymore.

BTN.com: Favorite post-run meal or snack?
HK: I love breakfast food – any time of day. I?m on a kick of making a smoothie before I run so that?s it ready to enjoy when I get back, but if we have time, my husband Ben makes some pretty epic omelets that fill your tummy and your soul.