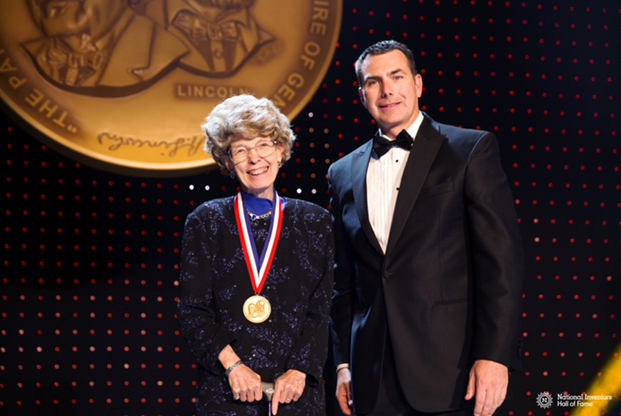 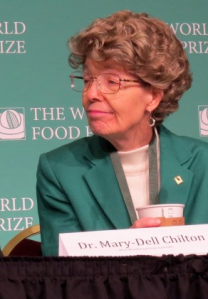 Dr. Mary-Dell Chilton's groundbreaking work with genetic engineering in plants started with what seemed to her like a ludicrous theory: that particular species of bacteria could attach to plant genomes and proceed to spread DNA to them.

"There was a student in the class that I taught who once told me about agrobacterium and crown gall tumors," Chilton said. "People had the idea that there might be gene transfer from the bacterium into the plant. And I thought that was the funniest idea that I had ever heard."

It was an idea so funny that she felt it warranted further research. So, Chilton organized a study.

"Lo and behold, we found that a little piece of agrobacterium DNA was indeed transferred into the plant cells," she said.

So began the first foray into transgenic plants, an entirely new area of research and development with the power to change how we feed the world.

The path to microbiology wasn't always so clear for Chilton. At the University of Illinois, she moved from an early love of astronomy to physics before finally finding her niche in the chemistry department.

"I had to choose two minors, and for my first minor I chose microbiology," Chilton said. "The first [class] I took was called the Chemical Basis of Biological Specificity, and in that I learned all about the brand-new field of molecular biology. I learned about the genetic code and the double helix, and it was fantastic. I loved it."

After earning her Ph.D. in chemistry from Illinois, Chilton's work took her to Washington University in St. Louis. It was there that her research in transgenic DNA transfer blossomed.

"We got another group going, and we managed to produce with agrobacterium the first genetically modified plant," she said. "It was a tobacco plant that had a yeast gene for alcohol dehydrogenases. This crappy improvement was probably useless. But the use of the thing was it showed you could do it.

"It showed it was possible to put a new gene into a plant cell and be sure that the gene was carried into the next generation by the seeds of that plant. It was stable and stayed in there for generation after generation."

Chilton was hired by agricultural sciences concern CIBA-Geigy, a legacy company of Syngenta, where Dr. Chilton currently holds a Distinguished Science Fellowship. There, her work centers on ways to improve the DNA transfer process to make it more efficient and cheaper to do.

Among her many accolades, Chilton was enshrined in the National Inventors Hall of Fame in 2015. As Rini Paiva, executive director for the Hall of Fame, explained, "She is a pioneer in plant biotechnology, and the fact that this work with the transgenic plant has since grown to have an impact across this very important industry led to her selection."

For all the strides that have been made in the field of plant biotechnology, Chilton admits that much more must be done to feed our planet's growing population.

[btn-post-package]"By mid-century, you are supposed have another 2 billion people," she said. "And to produce enough agricultural products - food, seed, fiber - for all those additional people is going to be a big challenge because right now, we're approaching a limited supply of nicely arable land. Water is becoming scarce, so it's going to be a challenge.

"We want to get more out of the agricultural land than we are doing now," she added. "There is going to be a diversity of needs out there, but the bottom line is that we have to solve the problems of agriculture."