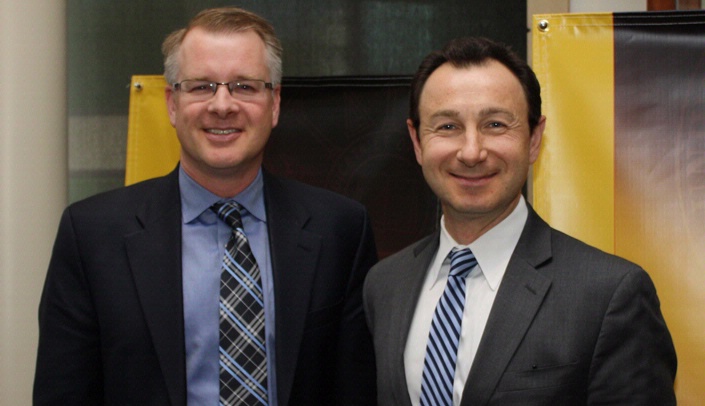 Some of humankind?s greatest achievements have been rendered in science fiction before they became science fact. Moonwalks, artificial intelligence, earbuds, electric cars - all were the stuff of someone?s wildest dreams until hard work, ingenuity and perseverance turned them into realities.

What?s next? How about small surgical robots that perform practically painless operations on people, along the same lines of the microscopic medical team that heals a patient by traveling into his body in Fantastic Voyage? 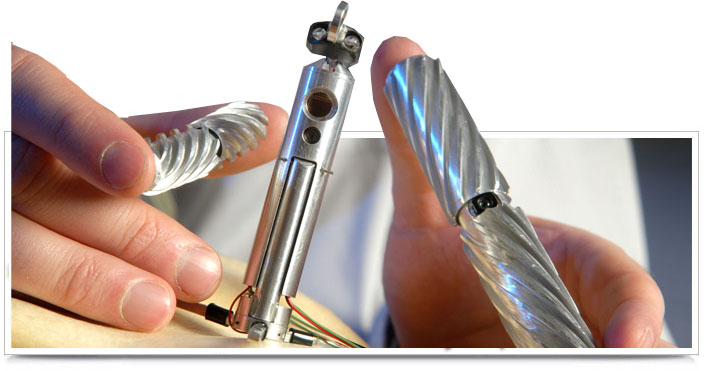 If miniature versions of R2-D2 wielding teeny scalpels seem far-fetched, think again. At the University of Nebraska, Shane Farritor, alumnus and current professor of mechanical and materials engineering, and project partner Dr. Dmitry Oleynikov, director of the Center for Minimally Invasive Surgery and the Center for Advanced Surgical Technology at the University of Nebraska Medical Center, have spent more than a decade developing, building and animal-testing just such a solution.

Many people are incredulous when this experimental surgical technique is explained to them, Farritor said.

?I hear that a lot, but it?s pretty real, though,? Farritor said of his work?s fictional-to-factual elements. ?We have big potential to make a difference.?

In the not-too-distant future, he promises that miniature robots will be enter humans through small incisions - or, possibly, natural orifices - and will do all sorts of medical magic on a routine basis.

Farritor and Oleynikov, credit two funding sources for helping them turn their original concept into reality. Both the U.S. Army and NASA have awarded the University of Nebraska and UNMC a total of $4.2 million over the past few years for this specific project. The money was used to spur the research and production of mini-robots for use in remote locations, with expert surgeons guiding the operation from many miles away.

Whether on a war-torn battlefield or in outer space, these robots could not only save lives, but also change the way people view invasive surgery altogether - at least, those are Farritor?s hopes.

?I think it can be transformative,? Farritor said. ?I think a huge class of surgeries can be done this way, and as robots improve, we are talking about going from big incisions to little ones, and after that is surgery with no incisions.

?You can think of natural-orifice surgery, because we have a few natural holes, and the mouth is the polite one,? he added with a chuckle. ?You can enter through the mouth, go through the stomach through the abdominal cavity, close the incision and come back through the mouth. You can have surgery at 8 a.m. and play golf at 1.?

[btn-post-package]According to Farritor, one of the most immediate uses for mini surgical robots could be a colon cancer patient who might need all or part of their colon removed, a procedure known as a ?resection.? In this procedure, a mini robot - about the size of a human fist with arms about six inches in length - could enter through a small incision in the belly button and perform the operation with a surgeon directing its movements.

?With a big incision, you?re in the hospital for about 10 to 12 days, and it hurts a lot,? Farritor said. ?That?s a long time to be off work. But if you go through the belly button, you?re out of the hospital in a day or two. It?s a great application for a reduced stay, less pain, less chance of infection; and the financial benefits make the procedure cheaper.?

Farritor, who calls himself a ?robotics guy,? trained on Mars Rovers while in graduate school at MIT and at California?s Jet Propulsion Laboratory (JPL) in the 1990s. He met Oleynikov in 2003 at a ?Shark Tank?-style competition involving Nebraska?s engineering college and UNMC.

?If you could make a proposal that was awarded first-place, you would get funding,? Oleynikov recalled of winning the competition with Farritor. ?Our proposal was mini robots, and it allowed us to get seed funding.?

Oleynikov trained at the University of Washington, where he researched robotic surgery. He was recruited to UNMC to develop clinical and research programs focusing on the use of robotics with surgical and medical applications. His interest in this field stemmed from the growing popularity of laparoscopy - a kind of surgery that involved putting fiber optics through a small cut in the belly to examine abdominal organs - in the late 1980s and early 1990s.

Now, about 25 years later, he and Farritor are on the verge of delivering a solution that he never could have imagined when he was in medical school or completing his residency work to specialize in laparoscopies.

?To say you?re going to [place] a small robot in a cavity and crawl around in you … people thought you were crazy,? Oleynikov said. ?[But] we?re getting close to doing this on humans in a controlled and safe manner.?