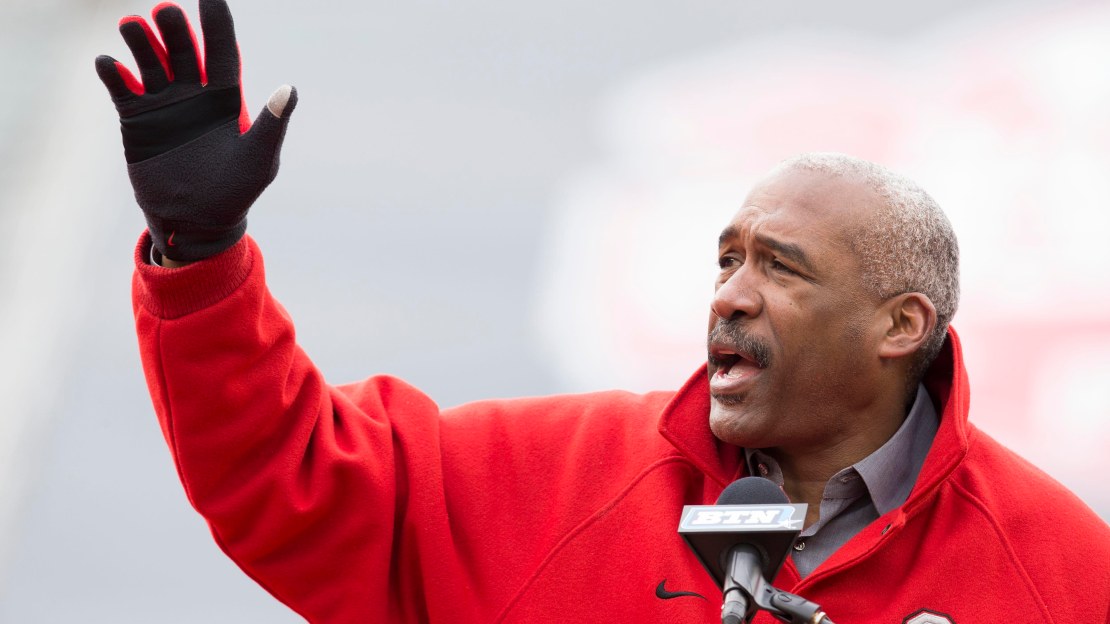 ROSEMONT, Ill. — During the recent meeting of Big Ten athletic directors, many topics were discussed. And one of the more prominent issues was that of graduate transfers.

Is the concept working as intended?

It?s a unique rule that has become a major part of the college sports landscape in recent years. A player earns his degree and still has a year of eligibility left. He then has the option to transfer to finish his athletic eligibility at another school. The catch: The athlete must be enrolled in a master?s degree program that isn?t offered by the school being left.

However, many of these athletes bolt before finishing their degree, giving the impression that the graduate transfer rule is more about picking a good landing spot to finish an athletic career than being an academic pursuit.

"I'm concerned about it because the original intent is not working," Ohio State athletic director Gene Smith said. "Originally, the conversation was, as a graduate transfer you would go to a school because the school you were at did not have your master's major. So you go somewhere else to get it. We know that's not happening. So, that's flawed. The other part that concerns me is that the graduate transfers are not graduating from those graduate schools. If I have a graduate transfer in a graduate school, I'm concerned about my graduation rate. If I'm taking people who aren't going to finish - and you know they're not going to finish - that's a challenge.

"We need to talk about it. We need to be fair for the kids. But we also need to look at it differently. It's not an academic issue. It's not. They got their undergraduate degree, so let's quit the facade and just say 'They've got one more year of athletic eligibility, so how do we facilitate that?' "

Another quirk to the grad transfer rule: A school can only pay for just one year of a transfer?s master?s program.

"They allow guys to come after they've graduated, but they come into a two-year master's program and you can only pay for one year," Matt Painter told IndyStar.com this spring. "It makes no practical sense. Allow them to come here for one year and play, and then whether they go play professionally or they stay here, whenever they decide to do it, pay for it so they can get their masters.

"… (Paying for one year) makes it a basketball rule - no ands, ifs or buts. They've just got to modify it, and I think it will work."

The Big Ten gridiron will see a key grad transfer this fall, as former Iowa starting quarterback Jake Rudock has used it to land at Michigan-where he just may start.

"I've had great conversations with Jake. Jake is a great kid," Iowa A.D. Gary Barta said. "So he did what the rules allow. I wish Jake would have stayed at Iowa. He's a tremendous quarterback. It was announced he got beat out and he made a decision and it was within the rules. So I wish he would have stayed but he chose not to.

"But again, it leads to a bigger discussion. I think we have to make sure the student-athlete's well-being is being taken care of. It's about rights and responsibilities. It is the right of a student to transfer, but we have to talk about responsibility on their end if they come to the University of Iowa. Right now it is fully within the rules to transfer out as a graduate and until that changes we'll be supportive. We were supportive of Jake leaving, even though we would have loved it if he would have stayed."

Should players be allowed to transfer within a conference?

"If you have the philosophy of student-athlete welfare - which I do - I don't know how you restrict them," said Smith. "I think we're beyond those type of restrictions today. We're trying to go the other way and let kids do what they're wanting to do. If you have your undergraduate degree, you did what we asked them to do. So if they want to go, let them go."

Another point that has been raised: Should any transfer have to sit out, regardless if they have earned their degree?

?They should let (transfers) play right away everywhere,? Akron coach Terry Bowden told CBSSports.com. ?They shouldn?t have to sit. The coaches leave. If we can go get a million-dollar contract somewhere else, why can?t the player leave? It?s no different than schools that want to get rid of a coach or a coach that wants to leave in the middle of his five-year contract. Nobody stops them. I don?t think it?s right.?

Undergrad transfers may always have to sit out a year. But it will be interesting to see the future of the graduate transfer rule.