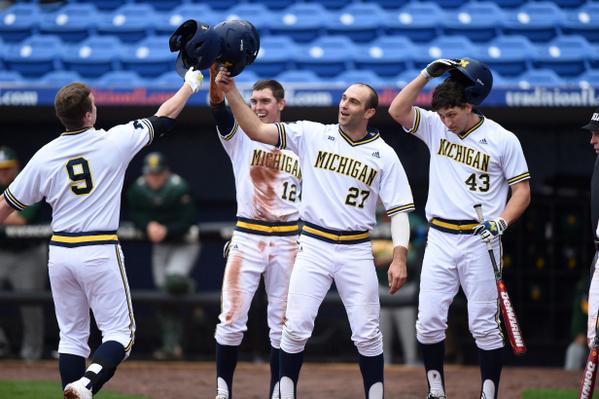 Eight teams made the five-day, double-elimination tourney, which can feature as many as 15 games. Find out how to watch every game.

Big Ten regular-season champ and No. 1 seed Illinois, which has won a program-record 26 consecutive games, and back-to-back tourney champ and No. 6 seed Indiana highlight a loaded field.

Before the action starts Wednesday, here's a look at my favorite uniforms that we could see over the five-day event in Minneapolis.

1. Michigan State throwbacks. These are perfect. Absolutely perfect. Only complaint: The Spartans should wear the look more often.

The Spartans and Illini go at it again today - 1 p.m. at McLane Stadium! pic.twitter.com/sbhWlumUBf

2. Indiana throwbacks. The three-quarter length sleeves and the old-school number font make this is a one-of-a-kind design.

3. Michigan throwbacks. You know what baseball uniforms lack these days? The old team-color waistband. The stirrups are icing on the cake.

We're just 13 days away from the home opener!! Single-game tickets are now on sale! http://t.co/G3LQADVimj pic.twitter.com/V4a2sXh7mP

4. Nebraska throwbacks. Yes, I'm a big fan of throwbacks. It's hard to find a single thing to complain about here.

5. Indiana home pullover. A vast majority of uniforms are button downs, but Indiana's design should make more teams want to go button-less. Got to love the Indiana script, too.

The best of the rest, listed in alphabetical order of school:

With tonight's win, #iubase clinched a spot in the Big Ten Tournament next week in Minneapolis. #GoIU pic.twitter.com/0AXFuG0W36

The @umichbaseball team takes down Oklahoma, 6-2 on Saturday afternoon. http://t.co/fBtyUoMZT4

With that steal, @tmontgomery08 has tied the OSU single-season record set by Mike Harris in 2001 (35). #GoBucks pic.twitter.com/3WD5ZMn7A8