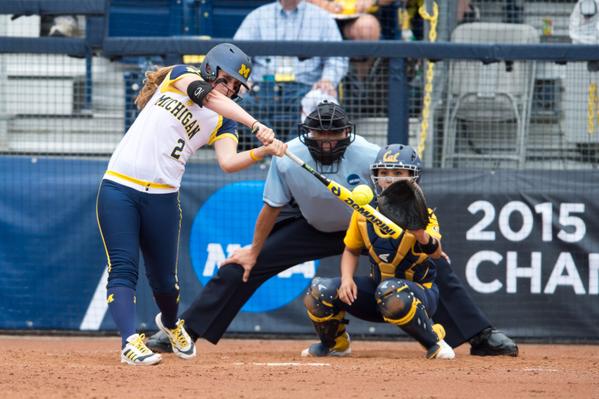 The No. 3-ranked University of Michigan softball team hammered out four home runs, including three to highlight a five-run fourth inning, and claimed a 9-1, six-inning victory over No. 19 California in NCAA Regional action on Saturday afternoon (May 16) at the Wilpon Complex, home of Alumni Field.

The Wolverines will await their opponent for Sunday's (May 17) NCAA Regional championship game, slated for a 3:30 p.m. start at the Wilpon Complex.

After Betsa set down the Golden Bears in order, fanning a couple, in the top of the first, California took the game's first lead in the second as third baseman Danielle Henderson knocked out a full-count leadoff shot to right centerfield. Betsa, whose only runs allowed in regional play have come off home runs, responded with three straight strikeouts to end the inning.

Michigan answered with a two-out run of its own in the home half of the frame. Sophomore third baseman Lindsay Montemarano drew a walk to initiate the rally, advanced to third a Falk single through the right side and came home for the tying run when freshman first baseman Tera Blanco chopped an RBI single up the middle.

Junior second baseman Sierra Romero put the Wolverines ahead with one-out solo shot in the third, connecting with the 2-2 pitch and driving deep to straightaway centerfield.

Michigan added three more long balls in the fourth, but the rally was again initiated by Montemarano, who knocked a leadoff looping double down the leftfield line. Falk swung and missed on two big cuts in the next at-bat before making contact with the fourth pitch, launching it into the bullpen beyond the leftfield wall. Lawrence also found the home-team bullpen two batters later with another two-run long ball. After Romero sent a deep flyout to the track in rightfield, sophomore leftfielder Kelly Christner put one over in the next at-bat, blasting a first-pitch solo shot in the grandstand.

Betsa worked herself out of a bases-loaded jam in the fourth after yielding a bunt single and a pair of walks. She forced a first-pitch popout to shallow leftfield to end the threat.

Betsa struck out the side in the sixth, before the Wolverines plated a pair of runs in the home half to end the contest. With Romero and junior rightfielder Kelsey Susalla aboard after a hit-by-pitch and walk, Sweet knocked a two-run double into the right-centerfield gap to pad U-M's lead to eight.