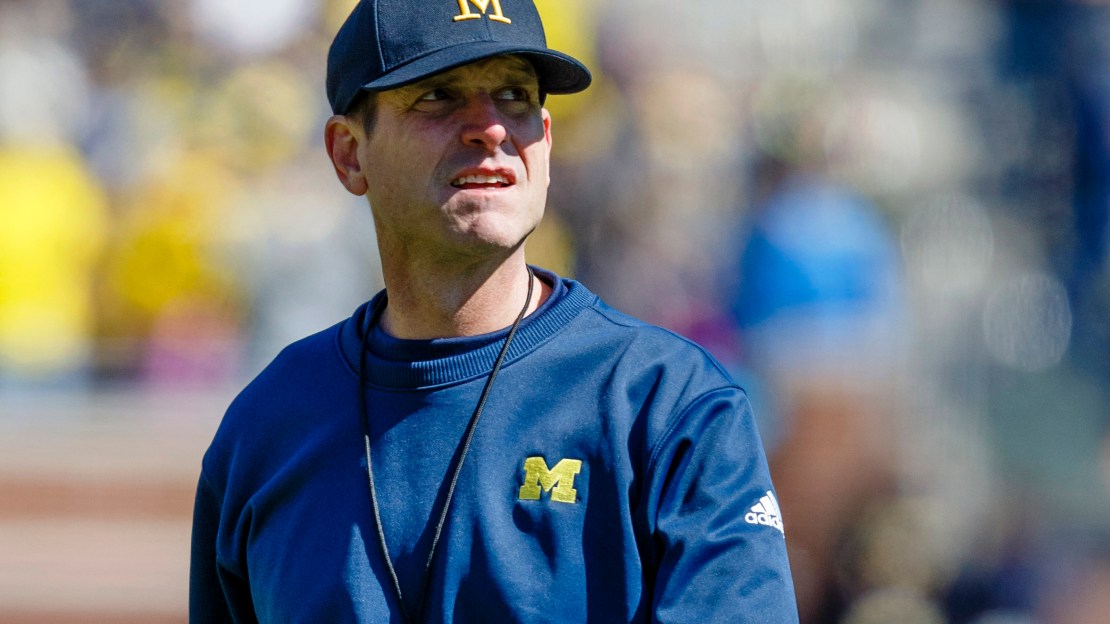 There is much anticipation and excitement surrounding Jim Harbaugh?s first season at Michigan. Can he return the program to the postseason after it missed a bowl last season?

More vital: Can he someday make the Wolverines a national power again? But, let?s just focus on the here and now.

Many hurdles loom on the 2015 schedule that features eight bowl teams and no FCS foes.

Toughest non-conference game: Jim Harbaugh?s debut will be a challenging one, as Michigan opens at Utah. The Utes are a well-coached team under Kyle Whittingham, an Urban Meyer protégé who went 9-4 last year. In fact, this is the sort of tough, physical squad Harbaugh hopes to one day make his program resemble.

Toughest conference game: Take your pick between the visit from Michigan State on Oct. 17 and the visit from Ohio State on Nov. 28. These foes will be the benchmark against which Harbaugh will be measured. The Wolverines have lost six of the last seven to the Spartans. But the last time MSU came to Ann Arbor, it lost 12-10, in 2012. Michigan is 2-12 vs. the Buckeyes in the last 14 encounters. The Wolverines? last win in the series came in Ann Arbor, 40-34, in 2011.

Who they don?t play: Nebraska, Wisconsin, Iowa, Illinois and Purdue.

Easiest game: UNLV visits on Sept. 19 in the third game of the year. And the tilt vs. the Rebels should be a relative layup, as UNLV is coming off a 2-11 mark and has a new coach. Otherwise, Michigan?s schedule is filled with challenging games at most every turn.

Rugged stretch: Michigan ends the season with a tough 1-2 punch, with a trip to Penn State on Nov. 21 and a visit from Ohio State on Nov. 28. The Wolverines may be playing for their bowl life in these contests. The last time Michigan was in State College, Pa., it lost an epic 43-40 four overtime game in 2013. The start of the season also is no treat, with the trip to Utah followed by visits from Oregon State, UNLV and BYU. Aside from UNLV, that?s three pretty tough opponents to take the lid off the Harbaugh era.

Best chance to be upset: It may not be much of an upset if BYU wins in Ann Arbor on Sept. 26. Still, Michigan needs to protect its turf. Bronco Mendenhall has a good team with nine starters back on offense and eight on defense from an 8-5 squad. Stud QB Taysom Hill is back from injury, which should be a huge concern for the Wolverines. He was a legit Heisman contender before going down last year. These teams have played just once, with BYU taking a 24-17 win in the 1984 Holiday to claim the national title.

Best chance to pull an upset: Michigan probably will be the underdog when it visits Minnesota for a prime-time battle for the iconic Little Brown Jug on Oct. 31. The Golden Gophers won last year in Ann Arbor, 30-14, in a game that may have been the ultimate undoing of Brady Hoke and A.D. Dave Brandon with the inexplicable handling of injured QB Shane Morris. Minnesota will be good-maybe the best team in the West. But if the Wolverines are playing well, especially on offense, they may be able to spring the upset.

Must win: Seeing as how Michigan may come back from Salt Lake City with a loss to Utah in the season opener, it likely will need to win the next week when Oregon State visits. The Wolverines must avoid an 0-2 start. The Beavers are beatable, as the program is retooling under new coach Gary Andersen, who shockingly bolted Wisconsin for Corvallis to replace Mike Riley after he left to coach Nebraska. The Wolverines are 4-0 all-time vs. Oregon State, last playing in 1986 in Ann Arbor.

Bye week: It comes after seven games, as Michigan will be off Oct. 24 following a visit from Michigan State. The Wolverines will have two weeks to prep for a game on Halloween at Minnesota, which has just two wins vs. Michigan since 1986. Could Michigan be 4-3 at the bye? 5-2? It will be interesting.