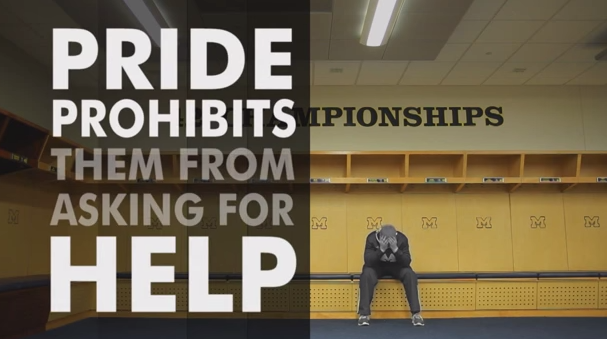 Many student-athletes deal with emotional and mental-health problems due to the intense pressure of being top performers. They often remain silent about their struggles for the same reason.

That was the case for both Kally Fayhee, former captain of the University of Michigan swim team, and Will Heininger, who played football for the Wolverines. But today, they?re sharing their experiences to support other student-athletes at UM through a program called Athletes Connected.

This program pulls together resources and dedicated professionals from the University of Michigan?s School of Public Health, The Depression Center and the UM Athletics Department to provide student-athletes with information and counseling for issues such as depression, anxiety or eating disorders. It also works toward reducing the stigma surrounding seeking assistance for those problems.

?It?s hard for a lot of student-athletes to reach out and ask for help because it?s a bit of a double-edged sword,? Fayhee said. ?You?re taught to put your head down - to tough it out and be resilient. That?s what has made you great in your sport, but if you let that be your guiding principle for your whole life, it can be destructive.?

Fayhee, who swam competitively for more than 16 years, knew this dilemma all too well. With Olympic dreams as her motivation, she worked extremely hard and soon became a standout on the Michigan swim team. But she had a secret - she was battling bulimia.

Heininger faced a similar situation during his earlier days on the football team.

?Playing football here was literally a dream come true,? Heininger said. ?After my freshman year, I moved home, and out of nowhere I was struck with depression. I tried to go about it on my own and tough it out, but it was the worst decision. I?m so fortunate and thankful to have had resources at U of M.?

Thanks in part to help they received from the university, both Heininger and Fayhee were able to work through their issues over time, and eventually they found a way to give back via Athletes Connected.

?We quickly got a team and put together what we thought was a great proposal,? Heininger said. ?We won the biggest award from the NCAA, a $50,000 grant to work on [Athletes Connected]. And ever since, we?ve just being going full-steam ahead and it?s created some really good momentum.?

From promotional videos to question-and-answer sessions to peer groups, Athletes Connected is opening up the discussion about mental health across campus and giving student-athletes the chance to bond with their teammates about these issues.

?There are a few options,? Heininger explained. ?They can go the clinical route and sign up to start counseling. There are also drop-in support groups for student-athletes. They?re really a place for athletes to get to know each other and help them feel connected.?

And so far, it?s been a huge success.

?From the very first meeting, it was fantastic,? Fayhee said. ?We had people come up to Will and myself and say, ?I?m struggling with the same thing, and I didn?t know how to reach out, or that it was okay to reach out.??

Heininger, Fayhee and others involved in the program hope to bring it to other campuses throughout the nation.

?We?re gathering research to try and push this out to universities across the country,? Fayhee said. ?We?re finding out so many things through different questionnaires that the student-athletes are filling out after the focus groups and Athletes Connected presentations.?

?The impact so far has been overwhelmingly positive,? Heininger said. ?It?s something that continues to drive us.?