Kevin Wilson Q&A: 'We have a long way to go, but it was a good spring' 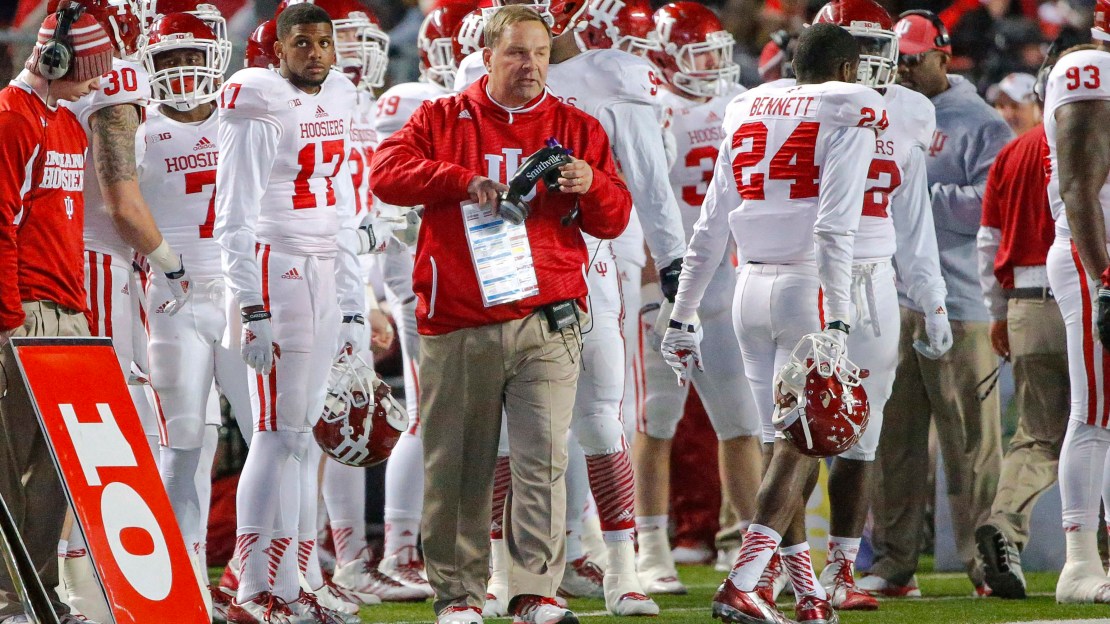 Indiana hasn't been to a bowl since the 2007 season, but you don't have to tell that to Hoosiers coach Kevin Wilson. He's aware. He knows history. He wants to change it. And that change could happen this season.

[ MORE: Watch replay of the Indiana spring game on BTN2Go ]

Wilson has what looks like one of his best teams since taking over the program in 2011, as the Hoosiers look better than usual in the trenches. That's where it starts for any good squad.

Last year was marred by injuries at quarterback that hampered the offense. And the Indiana defense remains the ultimate work in progress as it begins Year Two under coordinator Brian Knorr and his 3-4 alignment.

But lots of veteran talent is back on both sides of the ball. And Wilson is encouraged to have his entire staff back, even though a couple assistants had the chance to leave. The continuity has to help.

[ MORE: Get all of our Big Ten spring football coverage ]

I caught up with Wilson to get his views on his fifth Hoosier team coming out of spring ball.

Q: What did you like in spring ball?
A: It was by far the best group of veteran senior leadership chemistry/buy-in we have had. Nate Sudfeld had the best spring. He's a veteran who has played a lot, but he, (Jason) Spriggs, (Dan) Feeney, Adarius Rayner and some older guys, Nick Mangieri, stepped up like you want seniors to step up. They did not go through the motions of spring ball. They were enthusiastic and energetic. I was very impressed with our older crowd. We have some good players. We have great buy-in and a great vibe, which to me is the best we have had since I have been here. It was great to see our veterans do so well in the winter and the spring.

Q: How does the o-line look?
A: I think our offensive line is much better than what people give us credit for. And our tight end position has really come on. We have some big, athletic bodies there. We think we still can spread it out. The tight ends are a good complementary piece. With a good line, that tight end is setting the edge on the front side or the backside cutting off and being part of protection. He is a receiver. If a tight end catches 70 passes, but that is only five plays a game. So those guys are blockers. (departed Ted) Bolser was a good player. But this is the best group we have had. There isn't an All-Pro in there, but it is a good group.

I think the running game will be fine. I don't think people realize how good Feeney and Spriggs are. I am a line guy. And that line is pretty good. And we have a fifth-year player in Jake Reed playing center who started about half of last year. A fourth-year player in Dimitric Camiel at left guard, Timmy Gardner, the Ohio State transfer, at right tackle. Ralston Evans, a fifth-year guy who has started who isn't starting because of a knee. Jake Bailey has started for us, Wes Rogers has started and we have a couple of talented freshmen. The Big Ten starts up front on the line. We have a decent o-line and d-line that doesn't get credit. (Offensive line coach) Greg Frey is awesome.

Q: Who is going to run the ball with Tevin Coleman gone?
A: We bring in the kid from UAB (Jordan Howard), but he got hurt. He looked pretty good. He's pushing 230. We clocked him pretty fast. Devine Redding was very solid. We also lost DeAngelo Roberts, who was a nice complement to Coleman. We need a couple three backs. I am expecting Jordan Howard to be good. He has 2,300 career yards. He looked good. Missed some spring with a minor elbow injury. That wasn't good. But he is new and learning. I think Redding will be good and solid. Two freshman walk-ons looked good. Alex Rodriguez and Ricky Brookins. Rodriguez benched 435, verticaled 41.5 and did 33 reps with 225, ran 4.6, weighs 230. He was a good back on a state title team in Indianapolis.

Q: What part of the defense still needs to develop?
A: I think, on our entire team, it is perimeter play at corner, safety and receiver. We have no seniors at receiver. Ricky Jones is a fourth-year junior, we have one senior at cornerback in Kenny Mullen. We have one junior at safety in Antonio Allen. It is a talented group and we have recruited some good guys and have some talent coming in. We are more veteran on the o-line and d-line, quarterback, tight end. But we are green and need to get better on the edges.

Q: Is this your most talented team?
A: Across the front, yes. We have gotten slowly better. We can still be more talented. We have not been good on defense. We have to coach better, too. Tegray Scales, that guy is pretty good. He could play at a lot of places across the country. He's a good player. (Greg) Gooch is solid. You have Marcus Oliver and (T.J.) Simmons at linebacker. We are getting longer. (Darius) Latham, Adarius Rayner up front. If we can continue to mature and tighten up the backside, we could be OK. The buy-in is getting better. On defense, it is the best we have been as far as structure and tackling. We have a long way to go, but it was a good spring.

Q: Can you get to a bowl in 2015?
A: It has been a bowl team the last two years. You are 5-7 (in 2013) and you glitz it on the 7-yard line against Minnesota (42-39) and can't stop Navy (41-35 loss) and lose by six. We have been inconsistent. We put 44 on Penn State two years ago. We beat Bowling Green two years ago 42-10 and they only scored on a punt block ? that was a good win. The next year, we go to BG and get beat. We have been fiddling around it. We have been there and cracked the door down but haven't knocked it down. This team is better ? seven home games ? still a reasonably challenging schedule with Western Kentucky coming in and Florida International and going to Wake (Forest). At the same time, if you are going to be a good Big Ten team, you gotta manage that. And if you are going to be a good Big Ten team, you start holding your own in the Big Ten East. That division helps us recruit. Things have picked up.