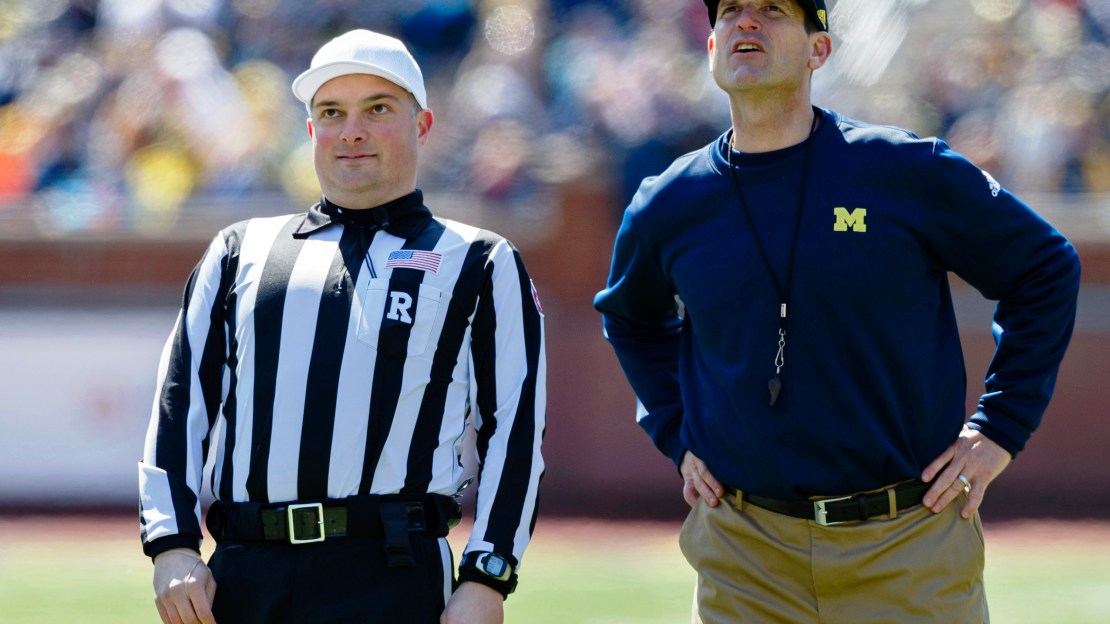 Spring football 2015 is in the books.

It's never smart to put too much emphasis on what we see in the spring, as star players are sitting out, coaches keep things very vanilla and certain players are wearing no-contract jerseys, among several other things.

Regardless, it's still fun to highlight the best performances.

Here is my annual All-Spring Team.

WR Rob Wheelwright, Wisconsin. He caught six passes for 67 yards and two TDs in the spring game. Started spring fast, missed a couple practices with an injury, then finished well. The staff is looking for a second WR to step up and play with Alex Erickson.

WR Corey Smith, Ohio State. He had six grabs for 174 yards, a whopping 29 yards per grab, in the spring game. Looks like an outside vertical threat with Devin Smith gone. Nice.

TE Anthony Corsaro, Indiana. Kevin Wilson raved about the way his tight ends played collectively all spring. And this guy really stood out.

OL Michael Deiter, Wisconsin. Will start at guard in the fall but had to take over at No. 1 center after Dan Voltz went down midway through spring.

OL Robert Kugler, Purdue. The unabashed leader of the offense, Kugler is an anchor at center for a line with promise. Yes, he?s a bit undersized, but Kugler compensates with smarts.

OL Billy Price, Ohio State. He looks like a force up front for a Buckeye o-line that should be a strong point. The guard may be the team?s strongest player.

OL Brian Bobek, Minnesota. Ohio State transfer who is finally getting a chance. He had to sit out as a transfer and then missed a season with a viral infection. Now he has a chance to be the starting center. If he earns the job, Jon Christenson (who missed spring as a steel rod was taken out of his leg) would move to guard. Coaches say Bobek had a really good spring.

OL Jason Spriggs, Indiana. He is primed to become a dominating tackle on what may be the most underrated line in the Big Ten. He teams with guard Dan Feeney to give IU a potent 1-2 blocking duo.

QB Chris Laviano, Rutgers. He is battling Hayden Rettig to replace Gary Nova. And Laviano looked good in the spring game, hitting 8-of-10 passes for 140 yards with two touchdowns.

How about this for a start! @RFootball WR Carlton Agudosi hauls in a nice TD catch in the corner of the end zone. http://t.co/zdxIgx4PyY

RB Rodrick Williams, Minnesota. Finally a senior and no longer behind David Cobb, Williams has dropped 20 pounds (is still a thumper though) and has fully bought in to what it takes to be a top Big Ten player.

Rodrick Williams Jr. is tough to bring down, and this impressive @GopherFootball TD run is your evidence. http://t.co/IPhF9Ur119

RB Akrum Wadley, Iowa. Part of a nice collection of Hawkeye backs, he ran for 80 yards in the spring game. Kirk Ferentz said Wadley still runs like he's a prep, going for the big play instead of taking a sure 4-yard gain.

[ MORE: Get all of our spring football coverage ]

L Carl Nassib, Penn State. The 6-7, 270-pound Nassib was described as a ?beast? all spring for a defense that needs help at end.

L Tommy Schutt, Ohio State. He looks like he?s finally ready to fulfill expectations on the inside at tackle after arriving amid big hype in 2012 with Noah Spence and Adolphus Washington.

L Julian Pinnix-Odrick, Rutgers. Kyle Flood raves about this guy, who was a force on the interior in the spring and is primed to break out. The Scarlet Knights need more players like him up front.

L Drew Ott, Iowa. He was in midseason form all spring. Go back and watch the first third down in Iowa?s first series in the spring game. He blew up the left offensive tackle. Here's the link.

LB Ja?Whaun Bentley, Purdue. He led defenders in tackles in the spring game, capping a solid spring. Bentley is a physical force vs. the run who is ready to become a star after playing as a true freshman.

LB Cody Poock, Minnesota. He had 17 tackles in the spring game as he looks to replace Damien Wilson.

LB Josh Banderas, Nebraska. A part-time starter the past two years, Banderas looked much better this spring and is poised to hold down the ?Mike? linebacker job.

DB Trai Mosley, Nebraska. He went from down the depth chart into likely contending for significant time at corner this fall.

DB Sojourn Shelton, Wisconsin. He had four INTs as a freshman, and zero as a sophomore. The corner appears to have his confidence back. Shelton had seven interceptions in the 15 spring practices.

DB Jabrill Peppers, Michigan. He redshirted in 2014 after arriving amid great hype. This spring, he flashed his considerable skills and also emerged as a leader. Look out.

DB Montae Nicholson, Michigan State. He impressed as a true freshman last year and continued to make strides in the spring. A big hitter at free safety, Nicholson has a savvy and knack that can?t be taught.

K Marshall Koehn, Iowa. He was a do-it-all force in the spring game, nailing three field goals and averaging 44 yards on two punts.

P Sam Foltz, Nebraska. The guy rocketed punts all spring and was especially impressive in the spring game. Not sure there is a better punter out there. He can tackle, too, evidenced by the video below.