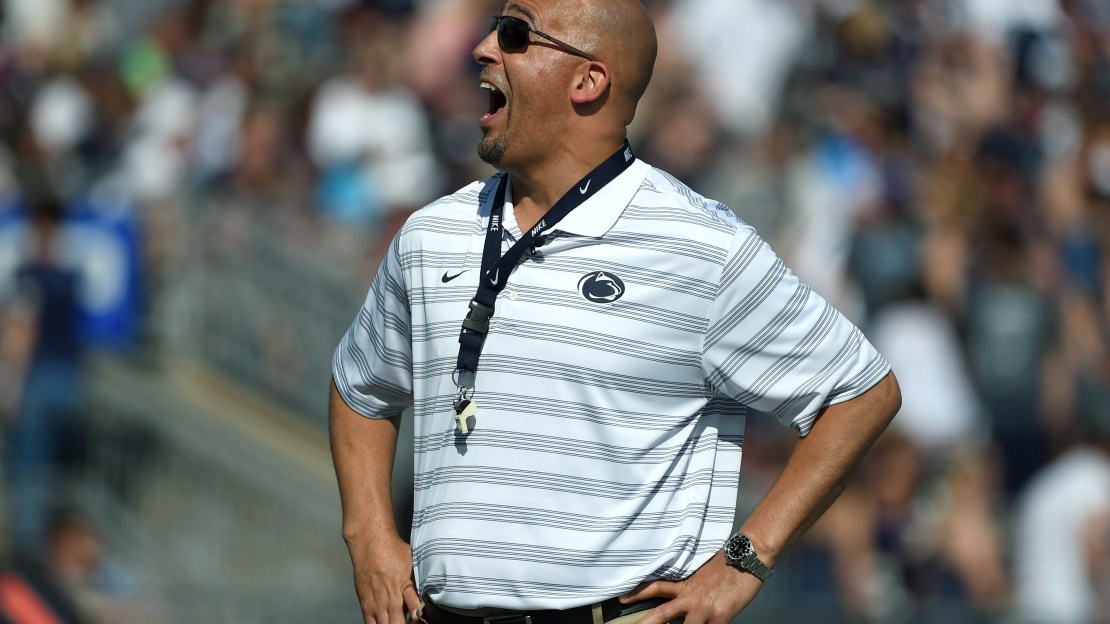 The nation is abuzz over Jim Harbaugh's arrival at Michigan. And Ohio State is coming off a national title behind Urban Meyer, while Michigan State has emerged as an elite program under Mark Dantonio. But keep an eye on Penn State and James Franklin in the uber-tough Big Ten East.

The program is emerging from the morass of NCAA probation, shedding sanctions as Franklin continues to re-stock a depleted roster for this program on the rise. The potential for big things looms, as Franklin looks to build off a good debut in State College, Pa., in which he guided the Nittany Lions to a 7-6 mark capped by a bowl win.

I caught up with the always positive, always up-beat and always excitable Franklin this week to get a sense of how spring drills went ? while also peeking ahead to the future.

Q: What things were you pleased with this spring?

A: We stayed fairly healthy, which is critical for us. We are still way behind in terms of depth. Last year, we probably shouldn't have even had a spring game. We ran the guys from one sideline to the other on the o-line. This year, we had just barely enough to do it. Year Two compared to Year One was completely different, like it would be in any job. We kept our staff together, so that familiarity with the schemes on both sides of the ball, techniques, expectations and how we teach and work together helped ? it is night and day. I'm the fifth head coach in 27 months here. So, that first year was challenging. There was so much change in a short period of time for everyone. I think now everyone understands how we do things and why we do things. I understand our players better and Penn State better.

Q: Did you sense much push-back from players upon taking over, or did everyone buy-in quickly?

A: I always have said that it is easier to take over a program that had gone 2-10 two years in a row than one that had had some success. They were used to doing things a certain way and having some success doing things a certain way. There is no doubt about it, we had to work through that. We had to convince them why we were doing things and how we were doing them. I have a different approach than the two or three previous guys that were here. Change is hard on people. And there has been so much change here the last five years. So, there definitely was some of that we had to work through.

Q: Was going to a bowl a surprise last year?

Q: Any younger guys we should keep an eye on?

A: (WR) DeAndre Thompkins is a guy everyone expected to play last year and we redshirted. The speed he brings to us will be important. Early in the spring, he jumped out as a guy who had matured and grown. Torrence Brown is a defensive end who redshirted that everyone around here is excited about. Trace McSorley is a guy people are excited about at quarterback. The position that stood out was defensive end. We went into the spring with questions. We had guys who had played a lot but hadn't been starters. We finished the spring feeling the d-line and ends will be a strength for us.

Q: How has Christian Hackenberg developed?

A: He's in a great place. He looks at last year as an opportunity for growth. He took a pounding and took criticism and got through it. He is in more command and control of the offense. He also was working with a young receiving corps in addition to a young line. Three of our top four receivers were freshmen. He was surrounded by inexperience. He realizes he has more experience and weapons around him and a better feel for what we are trying to do.

Q: How competitive will the Big Ten East be?

A: Think about the conversations going on about the Big Ten this time last year. And look at them now. It's a 180-degree change-especially on this side of the division. I'm excited about it. I love it, the competition. It will be fun, exciting, good for the Big Ten and good for college football and Penn State. This is why you do it, to compete against the best at the highest level. We are in a good position to do that.

Q: Do you have a relationship with Jim Harbaugh, Mark Dantonio or Urban Meyer?

A: I know Urban a little professionally. The same with Dantonio. ? meetings over the years. I know Harbaugh a little less but we know of each other. Tremendous respect for all those guys. It's more professional, as head coaches, sitting in meetings, having common friends.

A: I don't worry about those things. I do the same things every other coach does in other conferences across America. You take the rules of the NCAA, and the rules your conference has, and you use those rules to your advantage. You know the rules inside and out and you follow them and use them to your advantage. We aren't doing anything any differently than any other coach in the country would be doing. If they want to stop the satellite camps from an NCAA perspective, stop them for everyone. If not, we are going to use them and we are going to do everything in our power to help Penn State. To me more than anything, and the thing I love about it, I know there are kids across the country who are interested in Penn State but don't have the ability to come to see Penn State. This gives us the ability to bring Penn State to them, which I think is awesome.

Q: Why do you think some coaches in the South are against the satellite camps?

A: All I am concerned about is what we are doing at Penn State.

Q: What pitch are you going to throw at Yankee Stadium next week when your throw out the first pitch?

A: You know me. I'm gonna bring the heat. I'm not gonna be a safe guy who throws a 45-mph lob to make sure I don't end up on "not so top 10 SportsCenter." I will bring it. It will either be something of beauty like an 82-mph pitch on the edge of the plate. Or, it's gonna end up in the stands. One or the other. I'm going to go after it. So, we'll see what happens.