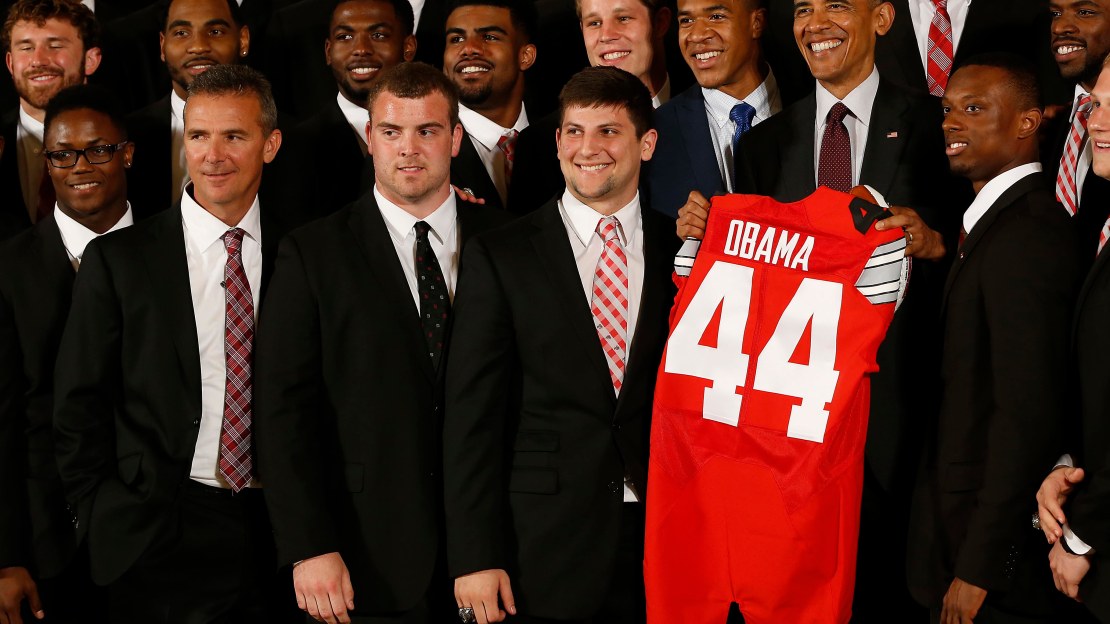 The President, a big-time sports fan, was on top of his game. Not only did Obama know all the important facts about Ohio State, its championship season, its personnel and its work in the community, he let his personality show on numerous occasions.

Find some of the top Obama-Ohio State moments below.

Editor's note: Watch Obama's full message to the Buckeyes starting at the 28-minute mark in the video above.

No better place to start than at the beginning, right? Obama approached the podium and started things off with a few "O-H" chants. The crowd responded with two loud "I-Os," but the third one left some to be desired, to the point Obama said, "That last one was a little weak there."

There were a couple playful interactions with a pair of Ohio State stars.

The first one happened after Obama delighted the gathering by giving Joey Bosa one of his signature celebratory shrugs, and proceeded to talk about the 2014 Big Ten Defensive Player of the Year's new hairdo.

Obama: "Joey's hair may be short now, and he looks good. I actually like it shorter."

Obama: "See, I appreciate that."

A couple minutes later, Obama introduced national title game MVP Ezekiel Elliott and, of course, made a joke about his now-illegal cropped jersey. Elliott had a quick quip.

Obama: "Thanks for tucking in your shirt today. We appreciate that."

Elliott: "You need to get that rule changed."

Obama: "He said I need to get the rule changed. Look, I already got the playoff. I got other stuff to do now."

And then there were these lines:

"I cannot claim full credit. But I will point out that I pushed for a playoff system in 2008. This is a promise kept. You're welcome, America." – Barack Obama, on College Football Playoff

"I told him that I could throw a football 75 yards, also. But he didn't believe me." Barack Obama, on Cardale Jones' arm, referencing his 74-yard toss at halftime of the spring game

"I've only done it twice, and for the same team both times." Barack Obama, comparing his two presidential victories to Urban Meyer's three national championships, won at two different schools

"Then J.T. Barrett, the Big Ten Quarterback of the Year, steps in, has an extraordinary run, but then breaks his ankle against a certain team up North. Guess I'm not allowed to…" – Barack Obama, on Barrett's injury vs. rival Michigan

"I will say, when you get a hundred thousand fans to show up to a practice, I think it's fair to say your fans are a little crazy." – Barack Obama, on Ohio State's record spring game attendance

There was also this moment, when Obama asked a couple of Ohio State legends to join him on stage.

And how about this: Michael Bennett gave the President bunny ears.

The man loves his sports.