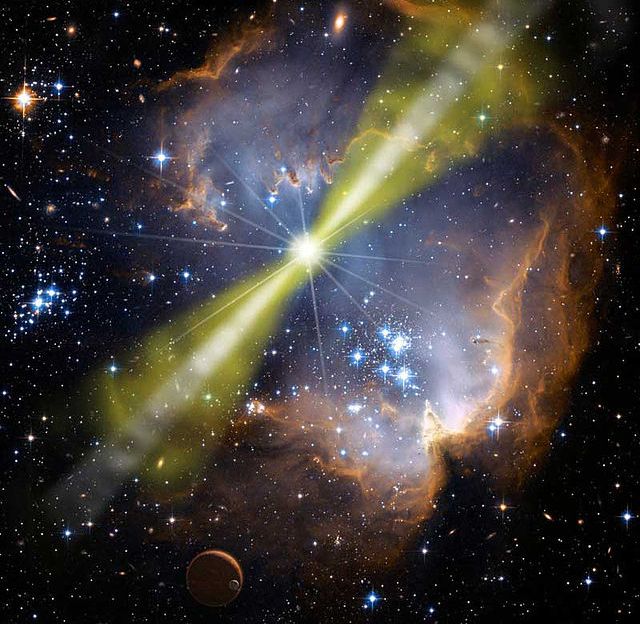 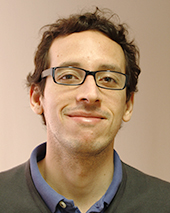 It?s nature?s greatest fireworks display: the supernova death of a bright, rare supergiant Wolf-Rayet star - already several hundred times larger in diameter than our own sun - which sends white-hot astroparticles flying millions of miles in multiple directions at close to the speed of light.

For Mauricio Bustamante, a postdoctoral fellow at Ohio State?s Center for Cosmology and Astroparticle Physics (CCAPP), that sheer magnitude is fascinating. He spends much of his time studying gamma-ray bursts (GRBs), the largest explosions in the universe, via simulations of those levels of energy release.

?Gamma rays are a very energetic frequency of light, and gamma-ray burst are the most luminous transient objects in the known universe,? he said. ?We now know that at least some of the GRBs are associated with the deaths of massive stars. Upon reaching the end of their lives, they will explode as particularly luminous supernovae. Matter will quickly accrete onto the newly-formed black hole at the center of the former star, and the infalling matter will be shot outwards at close to the speed of light, in the form of two jets, one at each magnetic pole. When one of these jets is aligned towards us, we see the gamma rays created within it. This emission is what we have come to know as a GRB.?

To find out more about his work, BTN LiveBIG interviewed Bustamante. That conversation is below:

BTN LiveBIG: How large are the actual explosions in nature that you're simulating in your models?

Bustamante: The size of the explosion depends on how we look at it. On one hand, the central object that drives the explosion, the black hole, is very small - only about 1,000 kilometers (km) in diameter. Compare it the diameter of the Earth, which is roughly 12,000 km. By human standards, even an object 1,000 km in size is very large, but by cosmic standards, it is quite tiny. The jets themselves are much larger, easily reaching the tens of billions of kilometers of extension.

But perhaps the best measure of the magnitude of a GRB is not its physical dimension, but the energy that it outputs as gamma rays: Even though GRBs are brief, during the seconds that they last, they will emit roughly as much energy as the Sun has emitted during its whole life so far. That should give you a good idea of why GRBs are the most violent, most energetic explosions of the universe.

So far, we have seen no GRB in the Milky Way. The probability of one occurring in any given galaxy is quite low. This is because GRBs are rare: In the local universe - that is, in the region of space that is closest to us - we think only about one GRB occurs every millennium. Of course, we see many more of them in our dedicated GRB surveys, but that is because most of them occur in far more distant regions of the universe.

The bottom line is that we should not worry about a GRB going off close to us anytime soon. But they might have happened in the distant past.

What are some things that the public should know about your work? For example, do astroparticles that fall to Earth as a result of GRBs impact the environment? How so?

Particles from outside the Earth - astroparticles - have been continuously bombarding the planet since back when it was still being formed. These include light of many different frequencies: radio, visible light, energetic X rays and gamma rays, electrically charged particles (protons and atomic nuclei) known as cosmic rays, and ghostly particles called neutrinos. They constantly reach the Earth and are as much a part of our planet's physical processes as, say, the weather and the natural ambient radioactivity.

[btn-post-package]The difference is that they come from outside: from the Sun, from other stars in the Milky Way and even from other galaxies, located several thousand billion billion kilometers [Editor?s note: That?s not a typo. He said billion twice.] away from us. We have always lived in their presence, and they pose no risk to us. In fact, cosmic rays and gamma rays contribute to the rate of mutation of all living things on Earth, and so they have played a part in the evolution of life in our planet.

Of course, it is only fairly recently that we became aware of the constant influx of cosmic rays and gamma rays into our atmosphere. Cosmic rays were discovered at the beginning of the 20th century, only a few years after radioactivity had been discovered at the end of the 19th century. The most energetic neutrinos, which we believe might be coming from outside our galaxy, were discovered just two years ago - in 2013, in an amazing experiment at the South Pole called IceCube. We might just have discovered astroparticles, but they have always been keeping us company.

In the end, a richer picture than we thought emerges: Each different kind of cosmic messenger carries a different piece of the puzzle, and only by studying all of them - light, cosmic rays, neutrinos - will we get the whole picture.

How has your experience as an academic fellow at OSU been?

CCAPP is a rare find: One of the reasons that I feel fortunate to be part of it is that the different interests and expertise of its members are highly complementary: They all bring something unique to the table, from her or his own set of skills and research history. This sets the stage for academic cross-fertilization to occur. Clearly, CCAPP faculty puts a lot of work into achieving the balance that makes it a melting pot of experience.

Regarding campus life, OSU?s is certainly very active, and I am always on the lookout for events like talks, music recitals or the odd retro-videogame-arcade day. The (admittedly self-imposed) work hours of a postdoc are somewhat constraining, though, so I am rarely able to actually attend the events and probably could do better on that front. However, just taking a leisurely walk through The Oval - the main green area at OSU - on a sunny day is a way to clear the mind and relax.