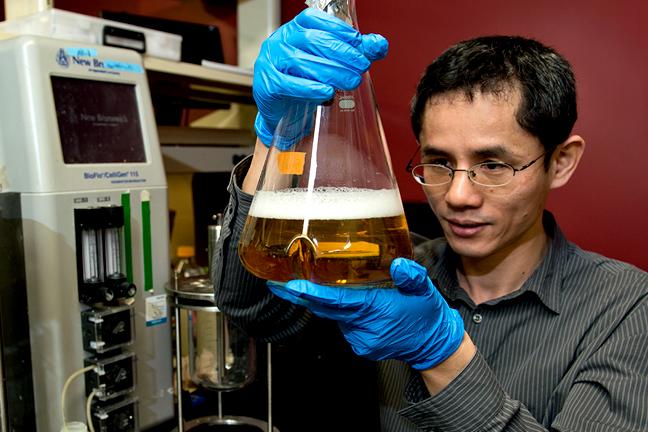 The story about the great scientist Isaac Newton discovering gravity when an apple fell from a tree and hit him in the head is almost certainly not true, or at least heavily embroidered. But it?s become so popular in part because it gets at another truth: Incredible scientific breakthroughs can happen at seemingly random and odd times and places.

Kechun Zhang, chemical engineering and materials science professor at the University of Minnesota, experienced that firsthand.

An outdoors enthusiast, Zhang?s breakthrough came while he was taking a nature walk in the fall of 2012. He was just strolling along a trail when he suddenly realized the ingredient he needed to help create a biodegradable form of rubbery polymer - a chemical substance that can be used to create goods ranging from water bottles to paint.

The miracle substance that popped into Zhang?s head? Sugar.

?It was in my mind for almost a year, and I kept thinking about it,? he said. ?There?s pretty nice weather in Minnesota in September, and somehow it just came up in my mind.?

According to Zhang, substituting petroleum with sugar has far-reaching applications, and it could address environmental issues related to producing chemicals and materials from petroleum.

?Petroleum-based polymers can stay in the soil and cannot degrade,? Zhang explained. ?It may take a thousand years to disappear. You can make plastic bags, chewing gum and Post-It notes with our polymer because it?s rubbery. In the winter, the polymer can be used as agricultural film to cover crops.?

And the versatility of his solution doesn?t stop there. Zhang plans to combine his efforts with those in the genetic-engineering world to create even more applications.

?With the advancements in genetic engineering, we can put DNA into micro-organisms and these micro-organisms can have non-natural capabilities to make non-natural compounds that do not exist in nature,? he explained. ?We can make these chemicals that have the same property as petroleum-based products, and they are renewable and environmentally-friendly.?

[btn-post-package]Zhang said supportive colleagues and institutions at the university have helped him in this endeavor. Last year, he became one of the senior investigators for the school?s Center for Sustainable Polymers (CSP), which is set to become one of only eight National Science Foundation for Chemical Innovation centers in the country. The Center was awarded a $20 million, five-year grant to develop the next generation of bio-engineered plastics.

?There are bio-based plastics that are already in the market, but our goal is to make them lower-cost and higher-performance to compete with plastics developed from non-renewable sources,? said Marc Hillmyer, director of CSP and chemistry professor. ?Our research will accelerate these discoveries and, with help from industry partners, we expect to realize translation of our work to products in the market.?

Zhang earned his bachelor?s degree in polymer science from the University of Science and Technology of China, and a doctorate?s degree in chemistry from the California Institute of Technology. He also has spent three years as a postdoctoral fellow at UCLA.

Interestingly, Zhang is originally from Bobai, China, a city that?s chiefly known for agricultural-based ethanol production, but he?s quick to note that his hometown isn?t the reason he became immersed in the study of chemical engineering.

?My father is a geologist, so I became interested in chemistry,? he explained. ?I always wanted to make new stuff.?

In that respect, Zhang has accomplished what he set out to do. But when asked whether his achievement is cause for celebration, he answers with an air of humility.

?It feels good to make new stuff, and I like to make something useful,? he said. ?But a professor?s job is not to just invent something. Another important job is to educate.?