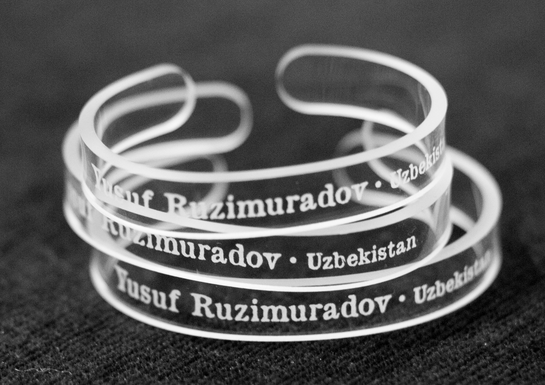 In the eyes of Dana Priest, longtime reporter for the Washington Post and journalism professor at the University of Maryland, endangered species aren't limited to the animal kingdom. She believes journalists around the world are falling victim to predatory forces capable of causing their extinction, too.

With that in mind, Priest set out to enlighten her students about the world's growing number of imprisoned reporters by giving them an assignment in her "Journalism in Peril" course last fall.

"I was thinking very hard of ways to teach a number of things at the same time," Priest says. "How do I teach foreign policy? How do I teach them about the Pentagon and the State Department? I was worried that I would put these big bureaucracies before them, and they would not have an immediate meaning."

Priest discovered that when she "personalized" the assignment, her charges found deeper meaning in the plight of reporters who have been locked away - or, worse yet, tortured and killed - for spreading the news in their homelands. By assigning students to write profile stories about imprisoned journalists, Priest saw their digging for leads, sources and facts mushroom into something much deeper than bylines.

"There are about 201 journalists in prison," Priest said. "Some countries, they just kill them. The goal was to have students connect with somebody who's alive with the hope of eventually pressuring governments to let them go." 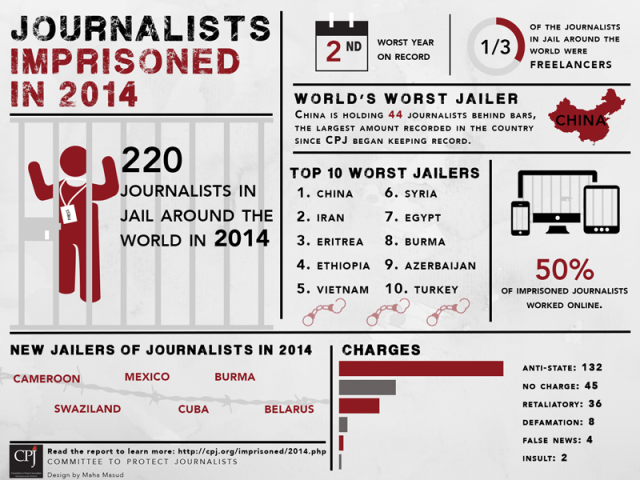 Their work has since given rise to the "Press Uncuffed" campaign, which aims to reverse that alarming trend. It was founded a few months ago by 20 graduate and upper-level undergraduate students from Priest's class at Maryland's Philip Merrill College of Journalism to raise awareness foreign journalists who are trapped behind bars all over the world, from Azerbaijan to Vietnam. And, of course, to help free them.

They're getting the word out beyond the campus at College Park. The students recently launched an Indiegogo crowdfunding effort that will allow them to sell bracelets bearing the names of dozens of journalists who are locked away in more than 30 countries around the globe.

"Press Uncuffed" reports the bracelets should be available to purchase online in time for World Press Freedom Day on May 3. They'll be priced at $10 apiece and carry the names of imprisoned journalists on them, Priest said.

According to Priest, China has the most imprisoned journalists at 44, and Russia "has terrible press freedom." She added journalists outside of North America and Western Europe - including photographers, TV reporters and even sportswriters - typically are jailed for shedding light on issues or events that are pro-democracy in nature.

"To give you one example, the government in Azerbaijan has cracked down on investigative reporting because there was writing about corruption in the family that rules the country," Priest said.

Priest, a Pulitzer Prize winner for her beat reporting on secret "black site" prisons and other controversial aspects of the U.S. government's war on terrorism, has been more than a teacher when sharing her knowledge about how to address this high-stakes subject.

Using telecommunications and social media, a couple of Priest's students were able to reach intermediaries that had direct access to imprisoned journalists. In turn, the incarcerated reporters were able to respond directly to interview questions that formed the basis of the profile stories about them.

[btn-post-package]Courtney Mabeus, a graduate student at Maryland who's studying multiplatform communications, is in frequent contact with a Turkish source via an encrypted messaging app on her phone. All the better for her to bring stories about imprisoned journalists in far-away countries closer to home, she said.

"We are dealing with some scary, sensitive subject matter, their well-being and their livelihood," Mabeus said. "It's people who are providing information to communities, basic information in some cases, and they are unable to do that."

If Priest and her crop of future news-breakers have their way, they would like to see the handcuffs that shackle journalists broken for good. But in the event "Press Uncuffed" is ever responsible for such freedom, Mabeus says she wouldn't consider that a cause for celebration.

"You can't look at it as a victory because it's basic human rights," Mabeus said in a matter-of-fact way. "It [the issue] makes me work harder, and you realize the importance of what you do [as a journalist] that much more."