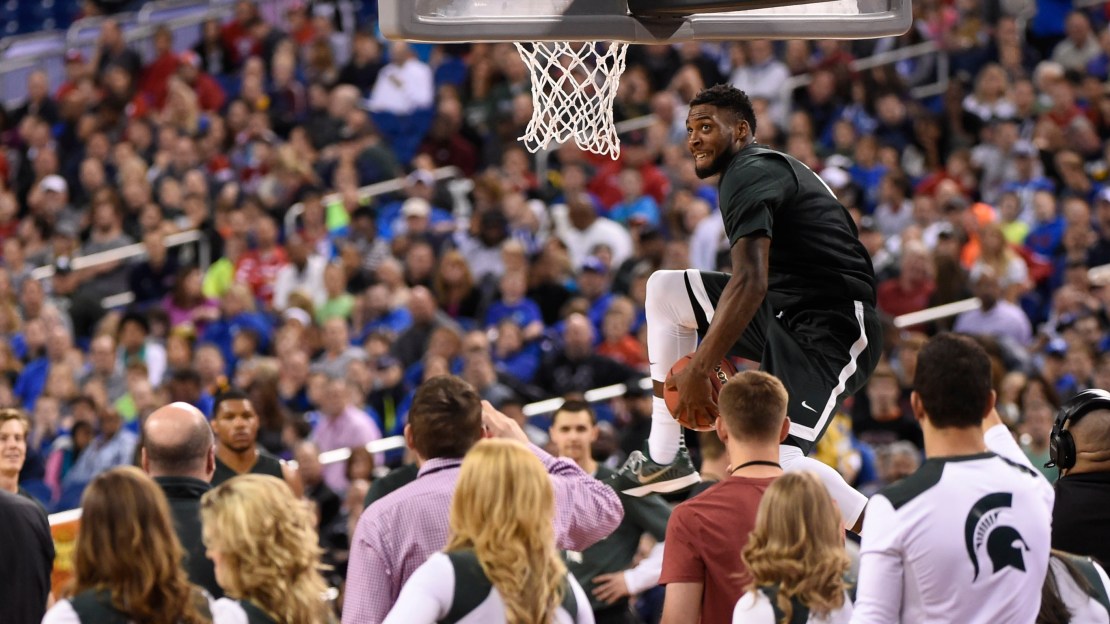 (AP) Quinn Cook is Duke's heart and soul, the senior who suffered through two stunningly early NCAA Tournament exits then slid over to accommodate the arrival of a talented freshman point guard.

That's why he won't let the Blue Devils be content with just making it to the Final Four.

"There's no next year for me," Cook said.

Look around the Final Four, and there's a lot of guys feeling the same way heading into Saturday's national semifinals.

Sure, unbeaten Kentucky is stacked with young talent and one-and-done players who often overshadow the guys that stick around for four years. But this Final Four offers plenty of proof that seniors – tournament-tested veterans ready to hit a key shot or mentor inexperienced teammates when their moment comes – still have a big say in how far their teams go in March.

"I think it speaks to why they're here," Trice said Friday. "It takes seniors to really put you over the edge and kind of help the young guys. Kentucky's a special talent where you've got some of the best players in the country on the same team. But for the teams that aren't as talented as maybe they are, you've got to have guys who have been through it and can lead the other guys."

That trio of teams have gotten here in different ways.

The Badgers (35-3) are back in the Final Four after suffering a crushing one-point loss to Kentucky in last year's national semifinals, an experience that stayed with Kaminsky and fellow seniors Traevon Jackson, Duje Dukan and Josh Gasser. It helped drive the Badgers to a single-season school record for wins while playing amid expectations that were stratospheric from the moment preseason practice began.

Kaminsky, named Associated Press Player of the Year on Friday, has been at his best in the tournament, averaging 22.8 points and 8.3 rebounds while shooting 52 percent in the four-game push through the West Region as a No. 1 seed.

#Badgers fans, want to get fired up for tonight's #FinalFour? Watch this video: http://t.co/4LCS57Atpi

"The senior class, the four of us, it provides a sense of leadership, a sense of experience, that nobody has really had before," Dukan said. "With the one-and-dones, they have some seniors but it's not the same type of seniors that have been through the grind playing and all that. But you know it's just a matter of what works. Some people find the one-and-done to work better. We find it better to stick around."

Compare that to the Spartans (27-11), who followed a run to the Elite Eight by flirting with not even making it back into the field of 68.

The Spartans stood at 13-7 after a January loss at Nebraska, but went on a late-season push that included reaching the Big Ten Tournament final to returning to the NCAAs for the 18th straight year.

Trice has been averaging 19.1 points over the past 13 games and is shooting 41 percent from behind the arc in the tournament. Meanwhile, Dawson's tournament numbers are on par with his season totals; the Big Ten's top rebounder is averaging 9.3 rebounds to go with 11 points.

"I keep reminding those freshmen every day: `You better appreciate those guys, you better appreciate them a lot because not everyone does this,'" Izzo said this week. "This is some of the things that have separated this year's team from top to bottom. There is a – I don't know if you can use the word – but there is a true love for one another. That is a powerful, powerful thing."

Then there's the Blue Devils (33-4), who have three freshman starters in star big man Jahlil Okafor, point guard Tyus Jones and versatile forward Justise Winslow. All three have lived up to preseason hype, and yet, Duke's success is just as much about Cook.

Cook had spent most of his career at the point during a career that included tournament-opening losses to No. 15 seed Lehigh (2012) and No. 14 seed Mercer (last year). Then Jones' arrival prompted Hall of Fame head coach Mike Krzyzewski to talk with Cook about shifting over to play off the ball alongside Jones.

"I said, `I'm going to depend on you,'" Krzyzewski said. "He's taken that to the highest level."

Cook has responded by averaging 15.5 points and shooting 50 percent from 3-point range, the best numbers of his career. He's also developed into the Blue Devils' best on-ball defender.

"Without Quinn Cook," Duke assistant Nate James said, "we would not be here right now."