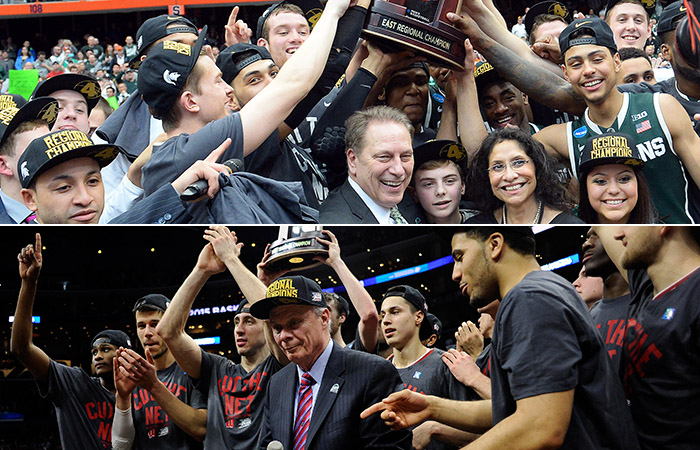 Surely, you're impressed. It's going to be a fun night! READ: http://t.co/naef1oa3vZ pic.twitter.com/0CKub0x1Ai

(AP) National championships, multiple Final Four appearances, impressive won-loss records year after year. Whatever your criteria for deciding the best of the coaches, this year's Final Four group has it.

Duke's Mike Krzyzewski is one ring away from a hand full of championship jewelry. He is tied with John Wooden for most Final Four appearances and his career victory total stands alone and even has a comma in it.

Michigan State's Tom Izzo has one national title and seven Final Four appearances. He is the Spartans' all-time winningest coach and he is just five wins from 500 in 20 seasons.

Kentucky's John Calipari, in addition to being two wins from the best record in Division I history, is trying for a second national title in his sixth Final Four, although trips with Massachusetts and Memphis were vacated for NCAA violations. He has 635 wins.

Wisconsin's Bo Ryan is in his second straight Final Four at the Division I level but he led Wisconsin-Platteville to four Division III national championships and two of those were with unbeaten teams. He has a combined win total at three schools of 739 in 31 seasons.

#Badgers fans, want to get fired up for tonight's #FinalFour? Watch this video: http://t.co/4LCS57Atpi

Maybe it's not a Mount Rushmore of college coaches. If you really went and searched, maybe you could find a group with a higher pedigree of coaching royalty. That would be hard. This is quite a collection of coaches at the top of their games for a long, long time.

"This is an old crew if I'm the youngest of the four," quipped the 55-year-old Calipari.

Calipari, who was recognized Friday as Coach of the Year by The Associated Press, is the only one of the four who has coached in the NBA, leading the New Jersey Nets from 1996-99 and a brief stint as an assistant to Larry Brown with the Philadelphia 76ers. Now he is concerned with the players who will most certainly be in the NBA for years to come.

"I'm focused on helping these kids reach their dreams. Their dreams are my dreams," he said.

Krzyzewski is in his 12th Final Four, his first in 1986 in his sixth season at Duke. He and the Blue Devils have become a fixture in the season's final weekend and he relies on each trip he has made to make the current one the best possible for these players.

"The first time you don't know what the heck you're going into," said Krzyzewski, the only Division I coach with more than 1,000 victories. "I think the main thing that we've done is we refer to what was good for us when we left, how we traveled, when we practiced, that type of thing, what we did while we were in the Final Four. It's a combination of all those things. It's more of an evolution of what you do."

Izzo had an amazing run stopped last season when the Spartans lost to eventual champion Connecticut in the regional final, one step shy of the Final Four. Every player who had stayed four years under Izzo played in a Final Four until last year's group came so close.

"The difference in my first one and my second one is I learned how to get tickets and hotels done on Sunday night," Izzo said, referring to the last day of the regional finals. "That first Final Four in Tampa, I think I was doing them on the way to the game. That was not very beneficial.

"Yet what's been fun for me is every Final Four I've gone to, I've told (the players) what to expect, it doesn't even come close. That's kind of cool."

Ryan is the only one of the coaches who knows what Calipari is facing in pursuit of being the first undefeated Division I champion since Indiana in 1976.

"Our two Platteville teams in Division III in `95 and `98 went undefeated. I get so many text messages and calls from guys who played on those teams that said, `Aren't those people smart enough to know there's been other undefeated teams in men's basketball?' I don't text back, `No, they're not smart enough.' I text back and say, `They don't feel it's relevant in this Division I environment.' But if you're asking what it's like to go through a perfect season, I just always thought it was pretty neat."

Texas Tech coach Tubby Smith won the title in 1998 with Kentucky. He knows how hard it is to get to the Final Four. This group of contemporaries has impressed him for how long they have been successful.

"What I appreciate is those guys are all veteran coaches. There's no hotshot, upstart guy," Smith said. "I really appreciate that because I think there's been that trend, even with me, `We need younger, more energetic. Or the game has passed you by.' That's not the case at all for most of us.

"Coaches, you're going to be teaching and coaching the rest of your life."