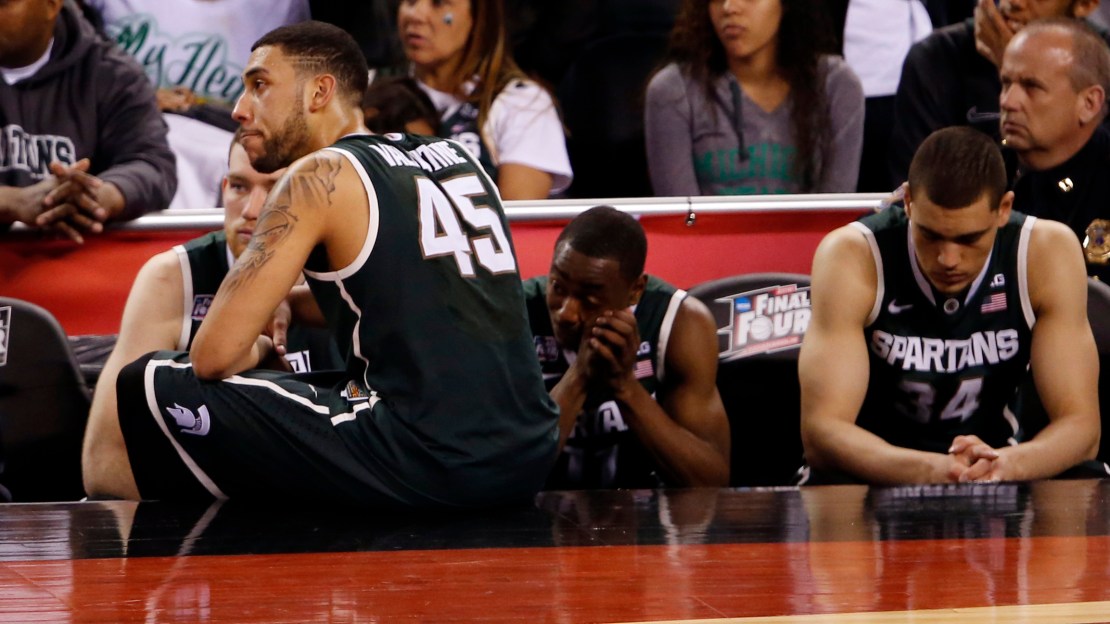 For the second time this season, Duke got the best of Michigan State, this time claiming an 81-61 victory in the national semifinals Saturday night at Lucas Oil Stadium.

The star: For Duke, it was freshman forward Justise Winslow, who hit 5-of-7 shots (9-of-11 free throws) for 19 points. He also had nine boards. Denzel Valentine was the star for Michigan State, leading all scorers with 22 points on 7-of-11 shooting. He also had a game 11 rebounds. But he didn?t get enough help.

The stat: 14, turnovers for Michigan State. It was the most for the Spartans' since the Big Ten tourney title game, which went to overtime, and that was killer vs. this Duke team that can get out in transition and score. It was a difficult night for Branden Dawson, who had five turnovers.

The key to victory: Time and again, Duke got the ball inside for easy buckets. Jahlil Okafor (18 points) and Justise Winslow (19) had their way for the most part vs. Spartan interior players Matt Costello, Gavin Schilling and Branden Dawson. Duke?s dominance inside (42 points in the paint, the most MSU had allowed all season) was a major reason why it shot 52 percent. Conversely, Michigan State shot 40.0 percent. And that ability to get inside also led to lots of fouls vs. the Spartans. Duke hit 27-of-37 free throws; MSU was just 10-of-16 from the charity stripe. With an edge like that, it didn?t matter that the Blue Devils hit just 2-of-10 3-pointers.

It was over when: Things started well for Michigan State, which jetted to a 14-6 lead at the 16:18 mark on a Denzel Valentine 3-pointer. MSU was smoking from long range. But, it all was downhill from there. Duke turned up the defensive intensity and chipped away, taking a 36-25 halftime edge. The Blue Devils came out flying to start the second half, taking a 42-25 lead before MSU even scored. At the 13:30 mark, Duke had built a 20-point lead, 54-34. And, the Blue Devils never looked back as Mike Krzyzewski improved to 9-1 vs. Tom Izzo.

What?s next: The season is over for Michigan State, but it was a heck of a run for the Spartans who confounded prognosticators by advancing to the Final Four-the seventh for Tom Izzo–despite being a No. 7 seed. The Spartans will welcome back talent like Denzel Valentine, Lourawls Nairn, Jr., Gavin Schilling, Matt Costello, Marvin Clark, Bryn Forbes and West Virginia transfer Eron Harris, among others. Branden Dawson and Travis Trice will be missed, however.

Notable: This is the sixth time Duke has played a team a second time this season. In the previous five times, the Blue Devils won by an average of 24.6 points. Tonight, Duke won by 20 and is headed to its 11th Final Four.