Dienhart: 'This was an appetizer for a success-starved Michigan fan base' 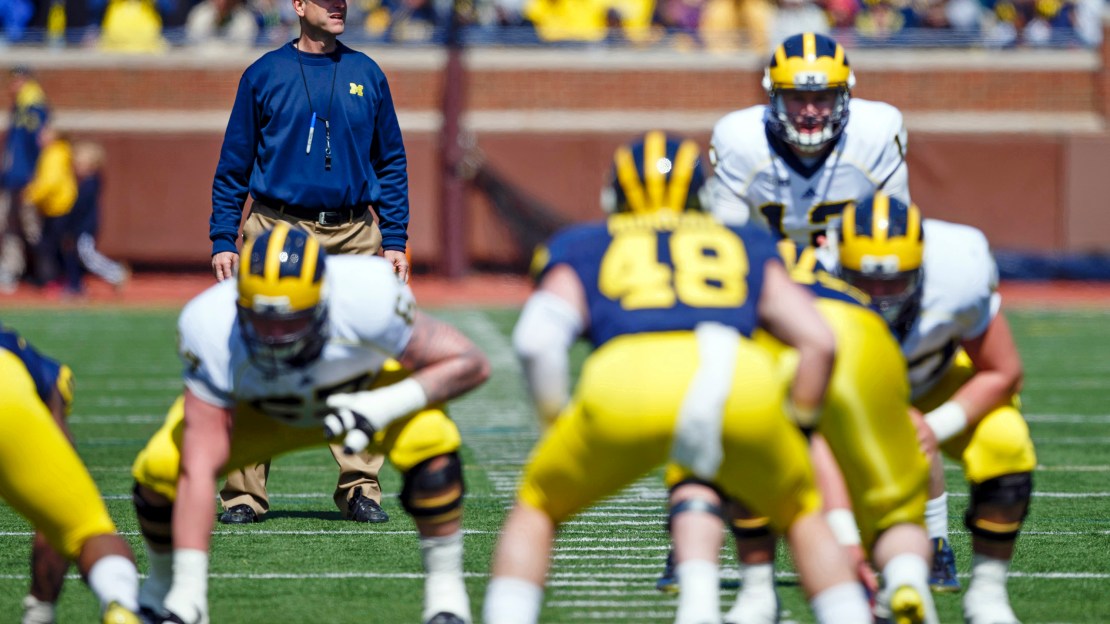 ANN ARBOR, Mich. - Beauty is in the eye of beholder.

[ MORE: Miss the Michigan spring game? Watch it on BTN2Go! ]

On one hand, Michigan?s spring game was difficult to watch, what with three interceptions, 333 combined yards and seven total points. But, it still was a beautiful afternoon for Wolverines fans that got to see Jim Harbaugh roam the Michigan Stadium turf for the first time in decades.

Harbaugh was, well, Harbaugh on this sun-splashed April Saturday, a man in motion with whistle in mouth who sported what now is his official uniform: hat, mock turtle neck and khakis. This was his first chance to kick the tires on his team in game-like conditions. And, the results were mixed. Final score: Blue 7, Maize 0.

The defense was the big winner, with linebacker Joe Bolden the star of the day with 13 tackles, a sack and three tackles for loss. But no one came to the Big House today to watch the defense. Nope. A crowd of about 45,000 was here to see Harbaugh … and the offense-the quarterbacks, in particular.

How excited are you about Joe Bolden after today's spring game, @umichfootball fans? http://t.co/GdcJEEVH3v

Shane Morris hit 11-of-24 passes for 135 yards with a touchdown and pick; Alex Malzone completed 15-of-27 passes with two interceptions. Each had some nice moments and was victimized by some drops. Harbaugh said afterward that Morris is the leader-for now. Still, neither did anything to quell concerns about a position that for too long has struggled to pass consistently. Have no fear! Jake Rudock will arrive from Iowa this summer as a graduate transfer, ratcheting up the competition. Stay tuned.

This is a building process in Ann Arbor. Fans get it. But they also look over the horizon and see rival Ohio State and Michigan State soaring. Plus, Penn State is building. It?s time for Michigan to play catchup. And that process began today in what may have been the most important spring game at Michigan since the Bo Schembechler era.

An overstatement? Perhaps. But, why not add more hype to a Harbaugh era that is threatening to set new standards for build-up, excitement and anticipation? Two more scoops, please. This honeymoon in Washtensaw County is still white hot, everything Harbaugh says causes Michigan denizens to shake them maize and blue pom-pons.

Yes, stats were kept ? quarterbacks were live ? officials were here ? the TV cameras were rolling. But today wasn?t really about any of that. Nope. Today was about tomorrow-and the possibilities that are ahead. This was an appetizer for a success-starved Michigan fan base that hasn?t tasted a Big Ten championship since 2004.

Here's a look at how the @umichfootball quarterbacks did today. pic.twitter.com/Zuf4fLM6uK

He wouldn?t be back at his alma mater if everything was hunky-dory. The Rich Rodriguez and Brady Hoke eras were punches in the gut and now seemed like distant memories on this fall-like day, even though the football often was far from vintage Michigan.

In the first half alone, there were three interceptions, dropped passes and false starts. The running game never got on track for a squad split up via a draft last week. That was to be expected, as everything is new for a program that is on its third head coach since 2010. Now, the offseason begins for a team that opens the season at Utah on Sept. 3.

?I?m walking away with a really good feeling,? said Harbaugh.

What did @coachjim4um think of the spring football game? Hear it straight from him at his postgame press conference. http://t.co/7DU4ma4U6H

Much work remains for a program Harbaugh will build around competition. It?s what fuels him. Competition oozed from every aspect of this spring. Drills, weight lifting, scrimmages ? there are winners and losers every day, everywhere. Only the strong will survive. Entitlement? Privilege? Bo wouldn?t have had any of it. And, neither will Harbaugh, a Bo Junior in many respects.

The connection between the iconic Wolverine coach and his star quarterback is strong to this day. Just listen to Harbaugh speak. Bo references dot most every conversation of a man who played a huge role in shaping Harbaugh?s life-beginning with a deflating diatribe that Schembechler laid on Harbaugh back in 1982 when he dared show up a few minutes late for a meeting. The recollection of that day still resonates with Harbaugh.

If memories don?t keep Harbaugh tethered to Schembechler, then walking past his statue each day on the way inside Schembechler Hall certainly serves as a reminder. Not enough Bo? Harbaugh has a photo of him hanging in his office. Bo is yelling, of course.

Take a closer look at the statue Harbaugh walks by. Read the inscription: ?Those who stay will be champions.? Harbaugh stayed after his browbeating over 30 years ago. And he became a champion, leading the Wolverines to a share of the Big Ten title in 1986 as a senior en route to the Rose Bowl.

This program hasn?t been to the Rose Bowl since the 2006 season when Lloyd Carr was head coach. Brady Hoke managed a Sugar Bowl bid in his debut in 2011, but it has been downhill since. In fact, Michigan has missed the postseason three times in the last seven years.

But, Michigan has turned the page. That?s what today was about. It was another step in the hoped-for restoration of one of college football?s marquee programs and brands. The game is better when Michigan is good. And, the Wolverines have a shot to be pretty good this season. How good? Seven or eight wins are possible.

The defense will be multiple operating out of a 3-4 base after the former staff used a 4-3. And the unit under coordinator D.J. Durkin should be pretty good from front to back. A big key: Finding a pass rusher. That man may be redshirt freshman Lawrence Marshall for a line that could be the strongest part of the defense. He flashed today with a sack and TFL.

The secondary also has potential as it adapts to a press-man coverage system. Jourdan Lewis and Blake Countess have skills. What they lack in size they compensate for with experience. And everyone on campus is amped to see what safety Jabrill Peppers can do. He has turned heads this spring with his athletic skill set. And his ability to lead and organize reminds some of former Michigan safety Jordan Kovacs.

The big key this fall will be the offense. Can it improve? Possibly. Harbaugh will run a traditional offense built around the running game that will set up play-action passes.

The line could be good-finally-with a likely front of Erik Magnuson and Mason Cole at tackle; Kyle Kalis and Ben Braden at guard; Graham Glasgow at center.

There is quality at wideout with Amara Darboh, Jehu Chesson and Freddy Canteen, who led the way with six catches today. And Jake Butt is a terrific tight end. And between Derrick Green, Ty Isaac and De?Veon Smith, Michigan should be OK at running back as it looks for its first running back to rush for over 1,000 yards since Fitz Toussaint in 2011.

Hear what Jake Butt had to say about today's @umichfootball spring game. http://t.co/Esz3S3cJUC

And, it will be beautiful to watch this big personality take over this big program.

The possibilities are huge.