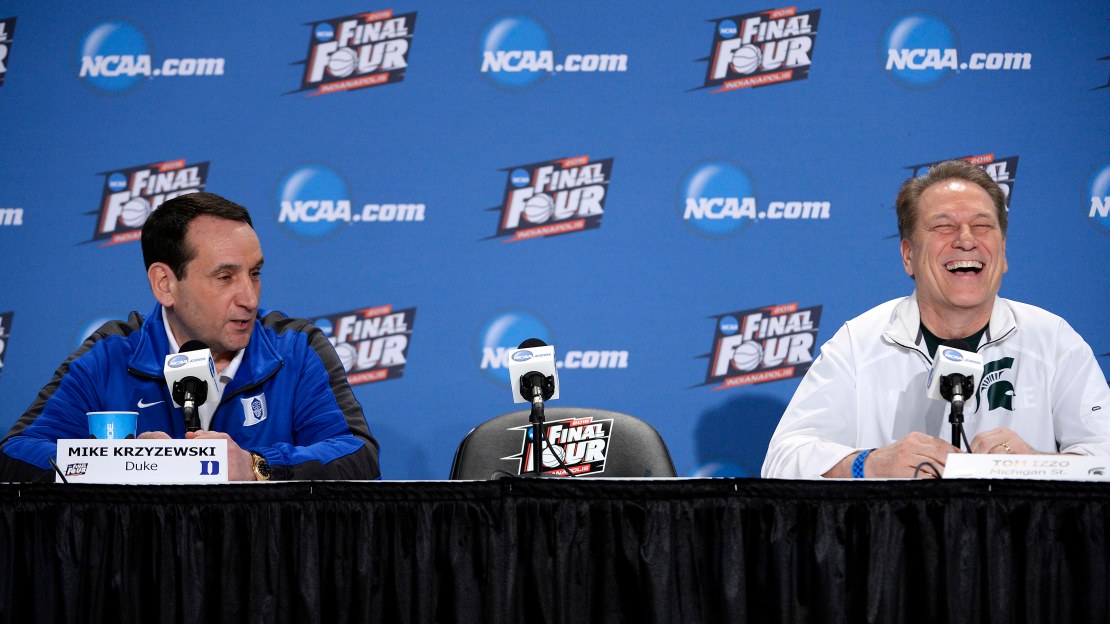 Mateen Cleaves knows what it takes to win a national title, guiding Michigan State to the crown in 2000. It?s the last time a Big Ten team won it all. So, when he speaks, I listen. And Cleaves thinks this Spartan team benefitted from the battle wounds of a non-conference season that included losses to Duke, Kansas and Notre Dame. Oh, and Texas Southern, too.

"You need some battle wounds, and I commend coach Izzo for even having a tough non-conference schedule," Cleaves said. "Especially losing two pros in Gary Harris and Adreian Payne and a four-year starter in Keith Appling. A lot of coaches wouldn't have gone out and played Duke early, Notre Dame and Kansas.

"Coach Izzo, he understands that playing those tough teams will definitely prepare his team for a run in March."

Meanwhile, Jim Polzin of Madison.com has a nice story on Wisconsin coach Bo Ryan, who has silenced his critics over 14 years.

Polzin notes that Chris Dufresne of The Los Angeles Times wasn?t a fan of Ryan being hired way back when: ?What was Wisconsin thinking?? Dufresne wrote. ?You don?t fire Brad Soderberg, Dick Bennett?s hand-chosen successor, unless you have Rick Majerus or Ben Braun signed, sealed and delivered. Don?t the Badgers look silly now that Majerus has formally rejected the school?s overtures and Braun has signed a four-year extension at California? It appears Wisconsin will hire fall-back candidate Bo Ryan of Wisconsin-Milwaukee, not exactly a household name. How is Bo Ryan better than Brad Soderberg??

Funny, huh? Soderberg flamed out at Saint Louis and is now coaching at a Division II school in St. Charles, Mo., called Lindenwood.

Oh-oh: With Wichita State?s Gregg Marshall off the radar, it looks like Minnesota?s Richard Pitino may be targeted by Alabama to fill its hoops vacancy.

In case you missed this, Scott Dochterman of the Cedar Rapids Gazette had a good piece on how Big Ten hoops wasn?t always great but it was at pivotal moments. And, after all, isn?t that all that matters? Sure it is.

Along those same lines, Rick Brown of the Des Moines Register says the Big Ten?s banner year made fools of us all.

"All year I tried to stick up for our league," Michigan State coach Tom Izzo said.

We all should have listened, Tom.

Interesting piece from Michael Spath of TheWolverine.com on graduate QB transfers, all in the wake of news that Iowa?s Jake Rudock will be heading for Ann Arbor.

Spath says that since the NCAA legislation was enacted in 2011, 20 quarterbacks have taken advantage of the rule in its first four seasons, with 11 of those winning the starting job in their first campaign with their new team. Among those 11, eight faced little to no competition. In fact, four of the 11 signal-callers squared off with teammates that had never even attempted a pass in college. Interestingly, out of the 11, only five had been a starter previously in their careers before transferring.

The odds for Elliott probably are long. Why? The Heisman tends to be a quarterbacks award. Check it out: 13 of the last 15 Heisman winners have been QBs.

Speaking of Elliott, he had a cast on a wrist removed recently and still has six weeks until he?s full-go.

The left wrist Elliott broke in fall camp last August required two surgeries — one in August and one after the season — and kept Elliott from reaching his full potential. Elliott said after beating Wisconsin in the Big Ten Championship that he "left a lot of yards on the field last year." Still he finished 1,878 rushing yards, 18 touchdowns and a pair of MVPs in the Sugar Bowl and the National Championship. Not bad, huh?

So, Auburn coach Gus Malzahn is hacked off because Michigan is gonna have a satellite campus in Alabama.

If Malzahn doesn?t like it, he can go have a camp in Michigan.

It?s no secret at Illinois: If the program under Tim Beckman wants to take the next step on offense, the line needs to step up.

Mark Tupper of the Decatur Herald-Review points out that the lines? task is two-fold: No. 1, the group needs to add some physical punch to the Illini running game. No. 2, the unit has to reliably keep pass rushers away from starting quarterback Wes Lunt.

His health is a critical area of concern. Lunt was hurt twice during an abbreviated freshman season at Oklahoma State. Then, after sitting out all of 2013 following his transfer to Illinois, Lunt suffered a broken leg last Oct. 4 against Purdue.