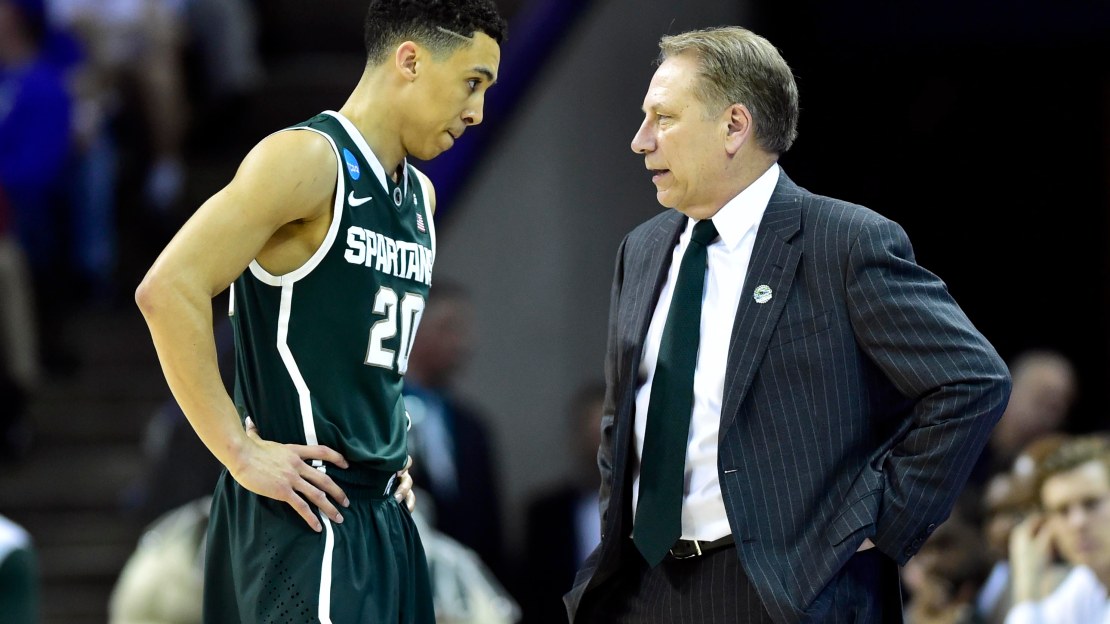 With the Final Four on our doorstep and spring football heating up, let?s answer some of your letters. There is a lot going on and it's only going to get busier.

Got a new question or comment? Drop it to me via the email box below. Thanks!

Why doesn't Tom Izzo stress practicing foul shots? The Spartans have struggled all season from the line! – Shirlee Marrs

Look, I?m guessing this Michigan State squad practices free throws as much as any of Izzo?s previous squads. Some players/teams just don?t have it. Could be a mental thing. Who knows? But, so far, the poor shooting from the charity stripe hasn?t cost MSU in the NCAA tourney.

For the record, the Spartans are shooting 63.2 percent from the line for the season. Not good. In the NCAA tourney, MSU shot 57.9 percent vs. Georgia; 60.6 vs. Virginia; 56.3 vs. Oklahoma; 75.0 vs. Louisville, hitting some big freebies down the stretch to seal the victory.

So, Iowa QB Jake Rudock is going to transfer to Michigan. Thoughts? – Joe B.

A good situation for both parties. Rudock was second-team at Iowa following the program?s bowl loss to Tennessee, as C.J. Beathard was anointed the top spot. Now, Rudock can play his fifth season at Michigan, a school in its first year under Jim Harbaugh that needs help at quarterback. Rudock could serve as a nice bridge for one season while Harbaugh and Co., develop the position.

Rudock is a known commodity who started for two years at Iowa. And, the Wolverines lack known commodities under center with the likes of Shane Morris, Alex Malzone, Wilton Speight or Zach Gentry, among others. In the end, it will be a surprise if Rudock isn?t the starter in 2015. He?s been there ? he?s done that ? he?s a safe choice.

Look, they both are very good coaches. Izzo has Michigan State in the Final Four for the seventh time during his 20-year tenure. Do the math; that?s a trip about every three years to college hoops? holy land. Beilein just had the Wolverines in the national title game two years ago, and he was in the Elite Eight last year. Before that, he had a power at West Virginia. I?d take either guy to run my program.

I don't think I have looked forward to a Final Four more than I am this one. It's got everything a Final Four should have–iconic teams, iconic coaches and star players. It should be fun. – John

I agree. It looks like a Final Four for the ages with star power galore with players like Frank Kaminsky, Jalil Okafor, Karl-Anthony Towns et al. Heck, Okafor and/or Town should be the No. 1 pick in the 2015 NBA draft. And then there are coaches like Mike Krzyzewski, Tom Izzo, Bo Ryan and John Calipari. Plus, we have the element of history with Kentucky making a push at history by hoping to go 40-0 to become the first unbeaten college team since Indiana in 1975-76.

Any word on Michigan State?s hoop recruits for next season? – Joseph Hoffman

Tom Izzo has missed on some big-time players in recent years, but he has a true five-star stud coming next season in 6-9 Deyonta Davis, a McDonald?s All-American and Michigan Mr. Basketball. MSU also has 6-5 guards Matt McQuaid coming from Texas, a four-star. And 6-4 guard Kyle Ahrens also will arrive from Ohio. The Spartans also are chasing a mega-recruit from Indiana-another big guy–and hope to land him in the spring. So, long story short: Izzo is doing just fine on the recruiting trail.

Who do you think has the best shot to get to the title game: Wisconsin or Michigan State? – Matt P.

As funny as this may sound, I think it is Wisconsin. I know, the Badgers will play the big, bad Kentucky Wildcats, who are 38-0. No matter, I think Wisconsin matches up well with UK, a team it lost to by just one point last year in the Final Four. Bo Ryan?s team won?t fear this Kentucky team.

Even more vital: The Badgers have the talent get the job done. This is an offensively skilled team-maybe Ryan?s best offensive team-that still can play sticky defense. MSU has a shot vs. Duke, but I just think the Blue Devils? superior talent-Jahlil Okafor, Tyus Jones, Justise Winslow–will win out in the end.

If you were Tom Izzo, how would you try to defend Duke big man Jalil Okafor?

You probably have to double the 6-11, 270-pound Okafor. You have to do what you can to keep the ball out of the post. Does that mean fronting the post? Perhaps. Big guys Matt Costello and Gavin Schilling will need to be on their game. But the most vital player may be Branden Dawson. He?s an uber athlete who can help on double-teams.

Read more of my mailbags from previous weeks below, and stay in touch with me using the form below.