The road it traveled: How Wisconsin advanced to Final Four 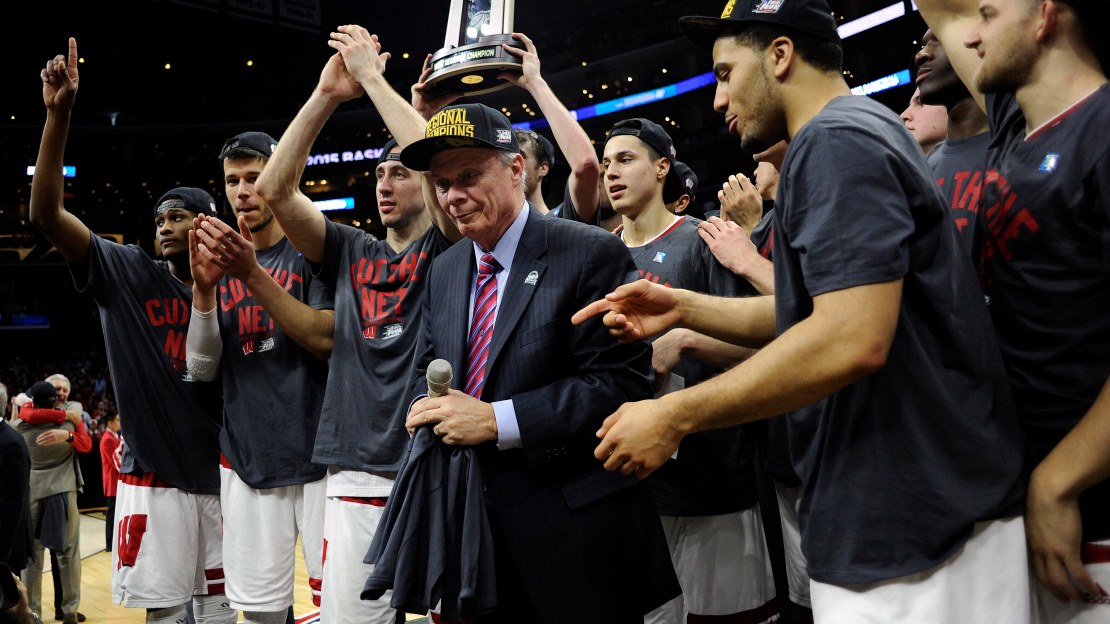 The last two seasons, Wisconsin has advanced to as many Final Fours as it previously had in program history.

Wisconsin clinched its second consecutive Final Four on Saturday the same way it did last season, with an exciting victory over Arizona in the West Region final.

And like last year, Kentucky awaits in the Final Four. The Wildcats, the top overall seed, eliminated the Badgers in the final seconds of last season's national semifinal.

Here a look at how Wisconsin, the No. 1 seed in the West Region, advanced to the Final Four.

SECOND ROUND: Wisconsin 86, Coastal Carolina 72
(AP) Always one to downplay the significance of seedings in the NCAA Tournament, Wisconsin coach Bo Ryan wasn't all that impressed when told his team made it another sweep for No. 1s against No. 16s in the NCAA Tournament. Frank Kaminsky had 27 points and 12 rebounds for his 12th double-double of the season, Sam Dekker had 20 points and Nigel Hayes added 15 against a Coastal Carolina team that gave a game effort but had no answer for the 7-foot Kaminsky or, for that matter, any of his hulking teammates.

Star player: Frank Kaminksy. The Big Ten Player of the Year dominated, shooting 71 percent and registering his 12th double-double of the season (27 points, 12 rebounds).
Key stat: 33, Wisconsin's field goals, marking its most since it hit 39 vs. UW-Milwaukee on Dec. 10, 2014.
Top quote: "Survived again." – Bo Ryan, joking after the 14-point win

ROUND OF 32: Wisconsin 72, Oregon 65
(AP) Wisconsin wasn't at its best against Oregon. Fortunately for the Badgers, they didn't have to be to earn a return trip to the Sweet 16. The Badgers beat the Ducks for the second straight year in the NCAA Tournament's round of 32, this time 72-65 at CenturyLink Center on Sunday night. Wisconsin had its worst shooting game in a month and got outrebounded by the smaller Ducks, and Big Ten player of the year Frank Kaminsky was quiet offensively for long stretches.

Star player: Sam Dekker. The junior scored a team-high 17 points, on 6-of-12 from the field, and grabbed five rebounds.
Key stat: 21, Wisconsin's points off free throws, compared to just five for Oregon.
Top quote: "At this point, I don't care if we play like crap and still win. We did some good things, we did some bad things." – Josh Gasser

SWEET 16: Wisconsin 79, North Carolina 72
(AP) Wisconsin looked like a beaten team for much of the game. Frank Kaminsky got off to a slow start, his team couldn't make a shot in the first half and then fell behind by seven midway through the second half. It looked like a repeat of the Big Ten Conference title game, when the Badgers were left for road kill against Michigan State before coming back to win in overtime. The top-seeded Badgers again proved their grit, rallying in the final 10 minutes to hold off North Carolina 79-72 Thursday night and advance to the final eight of the NCAA Tournament.

Star player: Sam Dekker. For the second consecutive game, Dekker led the Badgers in scoring, this time scoring a career-high 23 points, also a game-high, and grabbing 10 rebounds for his first double-double of the season
Key stat: 10, Combined points for reserve guards Zak Showalter (6) and Traevon Jackson (4), who returned for the first time since January 11, in 17 minutes.
Top quote: "These guys have been through a lot. They've seen the good runs. They've seen the bad runs. But this group never gets discouraged to the point where they get down on themselves or their teammates, and that's what's fun." – Bo Ryan

ELITE EIGHT: Wisconsin 85, Arizona 78
(AP) Just call him Sam Dagger. Sam Dekker hit 5 of Wisconsin's 10 3-pointers in the second half on his way to a second straight career high of 27 points, Frank Kaminsky added 29 points and the top-seeded Badgers beat No. 2 Arizona 85-78 on Saturday to reach consecutive Final Fours for the first time in school history. The Wildcats twice got within five points in the last 2 1/2 minutes, but both times Dekker connected on arcing 3-pointers, narrowly beating the shot clock on the first one.

Star player: Sam Dekker. Two nights after scoring a career-high 23 points vs. North Carolina, Dekker exploded for a career-high 27 points. He did it on just 11 shots, too, making eight of them, including five 3-pointers, in addition to hitting six free throws.
Key stat: 1.62, Wisconsin's points per possession in a hyper-efficient 55-point second half.
Top quote: "Sam Dekker pretty much just crushed our dreams with that shot." Arizona guard T.J. McConnell, on Dekker's late buzzer-beating triple

Just how good was @BadgerMBB in the second half last night? This good. http://t.co/Ko04290OYx #MarchOnBTN pic.twitter.com/93wW62iNPL