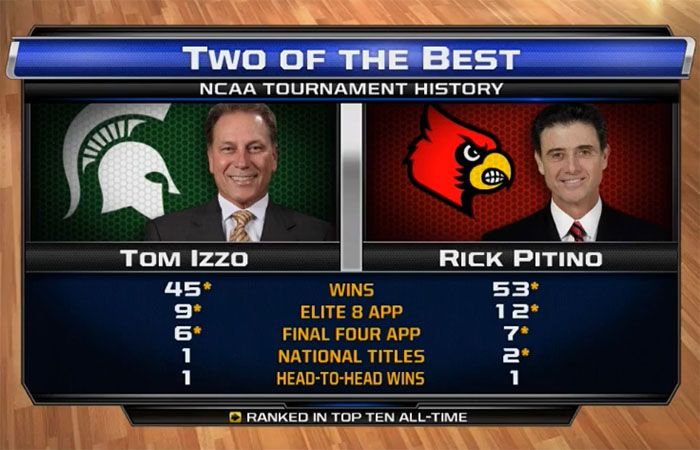 (AP) Tom Izzo and Rick Pitino are Final Four regulars, and one of them will be back this year even though both of their teams were counted out weeks ago.

"Sure as hell fitting for me, and I'm sure for him," Izzo said Saturday. "I think we both kind of came through similar kind of years and in different ways."

The two coaches have three national championships, 15 Final Four appearances and 98 tournament wins between them. Both have had to reinvent their teams' in mid-stream this season.

Definitely two of the best in the business. #MarchOnBTN pic.twitter.com/ZmVR4O6uQQ

The Spartans (26-11), the tournament's lowest remaining seed, lost three of their top leading scorers from last season. They looked like an NIT team in February, then went on an 11-3 roll capped by tournament wins over second-seeded Virginia and third-seeded Oklahoma.

The Cardinals (27-8) endured adversity in February. That's when Pitino had to reinvent his lineup after dismissing senior point guard Chris Jones and replacing him with true freshman Quentin Snider. Jones faces rape and sodomy charges.

"Our team really knows how to handle adversity, and we've had a lot of it this year," Pitino said. "I think adversity always makes you strong."

The Cardinals, seeking their third Final Four berth in four years, are led by junior do-everything forward Montrezl Harrell, who is averaging 15.7 points and 9.2 rebounds. The 6-foot-8 player, who has declared his intention to enter the NBA draft in June, is as much of a threat from 16 feet as he is dunking.

The Spartans, who had back-to-back Final Four appearances in 2009 and `10, play a scrappy style that leans on defense and transition.

Their recent run has been sparked by senior guard Travis Trice, who is averaging 18.2 points in his past 14 games.

Here are some things to watch out for as the two programs meet in the tournament for the fourth time, and third in six years:

REMATCH: The Spartans knocked out the Cardinals in the 2009 Midwest Regional final. Louisville responded by beating Michigan State 57-44 in the 2012 West Regional semifinal.

Spartans senior Branden Dawson recalls the latest loss all too well. He watched it on television in his dorm room after sustaining a knee injury in the regular-season finale.

Louisville is 5-3 against Michigan State, including a second-round tournament win in 1959.

CREATIVE EDITING: Following a 62-58 regional semifinal win over Oklahoma in a game that stretched into Saturday morning, Izzo didn't want to send his players to bed without a glimpse of Louisville. So he had them view a few clips of game film.

Izzo joked that he edited out any video that included Harrell.

"I didn't want them to have nightmares," he said with a laugh. "We had our video guy cut out anything where he was living with his head and feet on the rim."

QUICK-LEARNING QUENTIN: Pitino is impressed with how adeptly Snider has stepped in as a starter. The point guard is averaging 9.1 points and 2.7 assists, and has committed just 16 turnovers in his past 10 games.

"I'm amazed at what Quentin Snider has done, being just unflappable and thrown into a situation he didn't expect," Pitino said. "He didn't miss a beat."

D-FENSE: Louisville ranks 22nd in the nation in giving up 59.4 points. The Cardinals have allowed opponents to score 70 or more points just five times this season. And they've held six of their past nine opponents from scoring 60.

Michigan State is stingy, too. The Spartans have held opponents to a 39.4 field-goal percentage this season – and 33.1 percent in three tournament games. Michigan State is 24-4 when giving up less than 70 points.

"It was a big motivating factor, seeing those guys go through what they went through," junior Denzel Valentine said, referring to seeing how crushed members of the Spartans' senior class were last year. "During this time, we think about that. We want to make sure that's not us."

It's not lost on Izzo that the Huskies were a seven seed last year.

"We watched another No. 7 seed not only beat us but go on to win a national championship," Izzo said. "Maybe we hope history repeats itself."