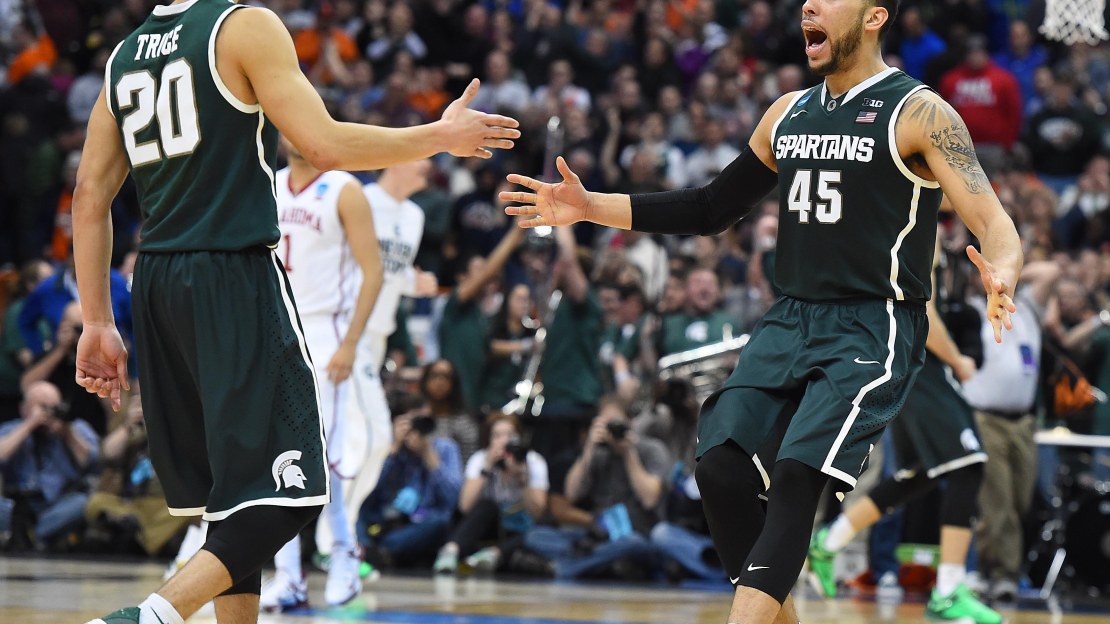 Travis Trice scored a game-high 24 points to lead Michigan State to a 62-58 win over Oklahoma in a Sweet 16 matchup.

The star: Travis Trice continues to excel in March, leading all scorers with 24 points to help Tom Izzo reach his ninth Elite Eight. Trice hit 7-of-14 shots (4-of-9 from 3-point range). He also added three rebounds and two assists, while hitting all six of his free throws. And four of those came down the stretch to help ice the victory for Michigan State. Quick nod to Denzel Valentine, who tallied 13 of his 18 points in the second half. And a tip of the hat to Branden Dawson, who had 11 big boards.

The stat: Even though Michigan State hit just 9-of-16 from the free-throw line (56.3 percent)-and OU connected on 14-of-16 (87.5 percent)–it didn?t hurt the Spartans. In fact, Michigan State was money down the stretch from the line, hitting its final six freebies to ice the game with Travis Trice nailing four and Denzel Valentine draining two.

How good were MSU's Big Three down the stretch? Dawson, Trice and Valentine combined to score 31 of their 35 second half points.

The key to victory: Neither team shot well, as the Spartans hit just 38.6 percent of their shots; Oklahoma connected on only 36.4 percent of its attempts. So, give the slight nod to MSU here, especially when you consider the Sooners hit just 12 of their last 44 shots (27 percent) after connecting on eight of their first 11 attempts (73 percent).

It was over when: Michigan State battled from behind all night, trailing by as many as 10 points. And MSU trailed, 31-27, at the half. The Spartans finally forged a few ties in the second half before a Branden Dawson jumper with 9:30 left in the game gave MSU a 44-42 edge, the Spartans? first lead of the game. OU briefly got back the lead before Michigan State took a 48-47 advantage on a Matt Costello dunk and never trailed again.

What?s next: No. 7 Michigan State will take on No. 4 Louisville for a spot in the Final Four. It would be Tom Izzo?s seventh Final Four, as he presses for MSU?s first national title since 2000.