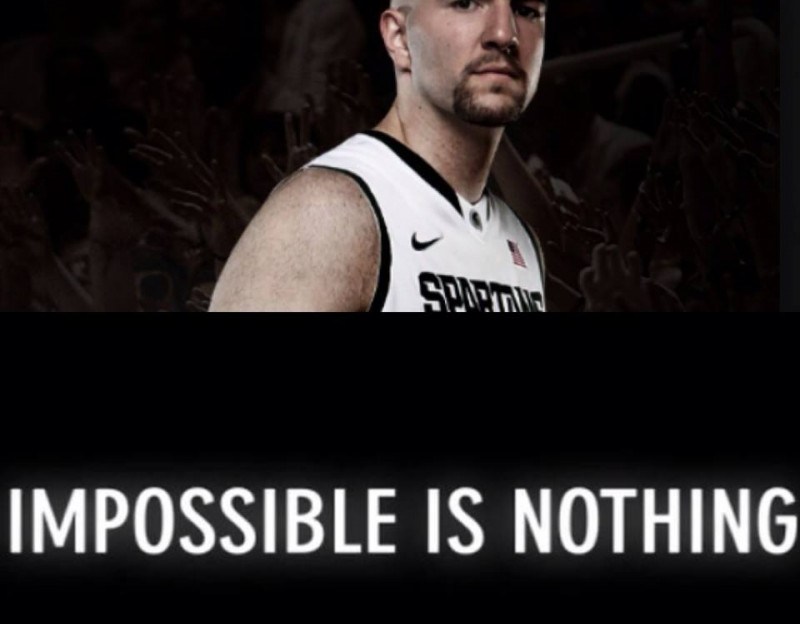 Ianni?s journey hasn?t been easy or typical, but it?s certainly been inspirational. At the age of four, he was diagnosed with Pervasive Developmental Disorder (PDD), which is on the autism spectrum. It can make regular social interactions challenging, as PDD affects how a person processes nuances in language, such as sarcasm.

While growing up in nearby Okemos, Mich., Ianni was often bullied for being significantly taller than other kids and his perceived awkwardness due to PDD. Also, despite his formidable height (he stands 6?9?), healthcare professionals initially told Ianni?s parents that he?d never be an athlete because of his condition.

Undaunted by those obstacles, Ianni graduated high school and went on to play college basketball - first at Grand Valley State University and later at MSU, where his father, Greg, has worked for more than 20 years and now serves as deputy athletics director.

In 2012, Michigan Lt. Governor Brian Calley, who has a daughter with autism and advocates throughout Michigan for the cause, attended the MSU basketball banquet. He approached Ianni, by then a senior, and asked him to speak at a gala for the Autism Alliance of Michigan.

Ianni spoke at the gala, and really, he hasn?t stopped since.

[btn-post-package]He now travels to schools throughout the state of Michigan and beyond with the Autism Alliance of Michigan?s Relentless Tour. The tour began in 2013, and since then, Ianni has stopped at hundreds of places - from elementary schools to universities - to tell students his story and speak out against bullying.

?I?m able to go out on the road five days a week and give everything that I have and try and inspire people,? he said. ?My goal is always to make an impact. As long as one person walks out of the door inspired by what I had to say, that?s all I care about.?

Ianni said Michigan State head basketball coach Tom Izzo was one of the biggest motivators in his life. He credits Izzo with helping him through a challenging time and keeping him moving towards his goals on and off the basketball court.

?He cares so much about his players,? Ianni said of Izzo. ?He wants them to be so successful, not just on the court, but off the court. He wants them to make an impact in their communities.?

In addition to Izzo, Ianni recognizes his father as one of the most influential people in his life. And the feeling is mutual.

?My father?s always told people he?s had two heroes in his life ? my grandfather [his father] and me,? Ianni said. ?That?s pretty emotional for me when he says that about me. That?s my goal - to go out and be the hero that he wants me to be.?

Of all his accomplishments, Ianni is most fulfilled by becoming a father himself. He and his wife Kelly recently welcomed a son, Knox Joseph, into the world.

?I want to be the best person and the best father that I can be for my son,? Ianni said.

And he continues to inspire both people close to him and complete strangers. Ianni recently started working with the Michigan Department of Civil Rights, and he?s also gotten involved with Michigan State?s autism efforts.

?I couldn?t be more proud of that university for how they?re really stepping up to the plate and making autism one of their top priorities,? he said.