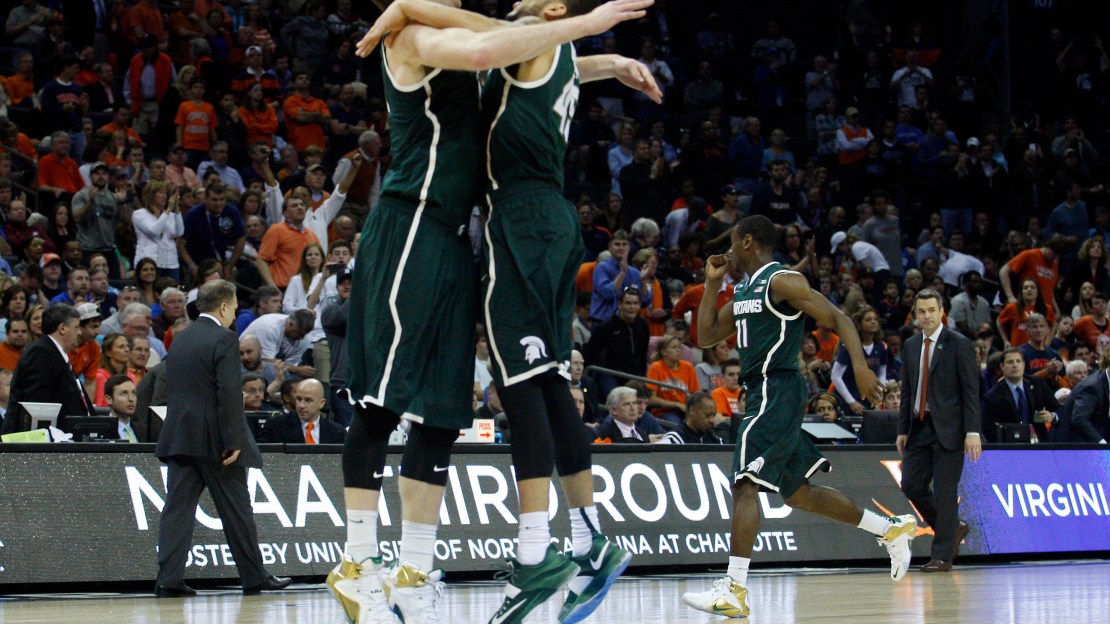 This is a great time of year, with March Madness in full swing and spring football rolling. So, it?s a good time to reach into my mail bag.

Do you think Michigan State can win the national title? – Richard Cobb

You have to like the Spartans? chances to at least reach the Final Four for the first time since 2010. Tom Izzo?s team is playing well, winning six of its last seven games. And the lone loss was an overtime defeat to Wisconsin in the Big Ten championship tilt. Michigan State is deep and motivated. If Branden Dawson stays dialed in, and Travis Trice and Denzel Valentine keep making shots, this team has a shot-but it?s a long one.

What position on Michigan is of the most concern for Jim Harbaugh? – Tom Bosma

Well, it has to be the quarterback spot. The position has been a sore spot for a few seasons. The jury remains out on Shane Morris, who failed to impress consistently when seeing action last year. Other options are redshirt freshman Wilton Speight and true freshman Alex Malzone, who has enrolled early and is going through spring drills. Zach Gentry will arrive in the fall with a big reputation. He may be the long-term answer. John O?Korn is sitting out after transferring from Houston. Rumor continues to swirl that Jack Rudock could transfer from Iowa. He would be immediately eligible upon graduation this spring, with one year to play. Rudock seemingly would be a ?bridge-the-gap? alternative for 2015, a quarterback Michigan could win a bit with next season while the youngsters develop.

Do you agree with some of the TV analysts who say that Travis Trice is much more effective if Tum Tum Nairn plays point guard? – Max Weissengruber

Yep, I agree. Nairn seems to be a more natural point guard than Trice. The Spartans benefit from having Trice on the wing, where he can run the court and shoot-or drive to the hoop. He is more scorer than facilitator.

If you were Michigan State, would you like a chance to play Wisconsin in the NCAA title game to get revenge for that overtime loss to the Badgers in the Big Ten championship game? – Scott Hansen

That would be interesting. The Spartans surely would just like to reach the title game. Playing Wisconsin again would be interesting. Michigan State has lost twice to the Badgers this season. Could Wisconsin beat the Spartans a third time in the same season? In the defeat in the league title game, MSU failed to even score in overtime. Each team has a lot of heavy lifting to do to reach the title game. But, an all-Big Ten final would be fun. The last time it happened? It was 1976, Indiana vs. Michigan.

I am a die-hard Hawkeye. But now that they are out, I can't help but root for Tom Izzo. I have always admired him as a coach and as a person and I would rather see them go farther than Wisconsin. – John

Yes, Izzo is very impressive, a terrific coach who has built a national power and a national brand/program that seemingly is in contention every season. But there is a lot to admire about Bo Ryan and the Badgers. Ryan has built perhaps the most consistent program in the Big Ten, never finishing lower than fourth since taking over in 2001-02 and making the NCAA tourney each year. He made the Final Four last year-and he could finish out his resume this year with a national title.

What are the odds that Traevon Jackson will return to play against North Carolina? And if he does, what will his role be? – Josh Willer

It sounds like the plan has been to get through the first week of the NCAA tourney without him, and then start to work him in. Well, here we are. And, from all reports, it sounds like Jackson has been medically cleared to play. It?s up to him to see if he can play on Thursday vs. North Carolina. He has been out since Jan. 11 with a foot injury suffered in a loss at Rutgers. No doubt, Wisconsin could use Jackson. Zak Showalter is the backup point man to Bronson Koenig. Jackson would lengthen a short bench and give Wisconsin a big shot maker and penetrator. Those skills will be needed as the competition gets tougher.