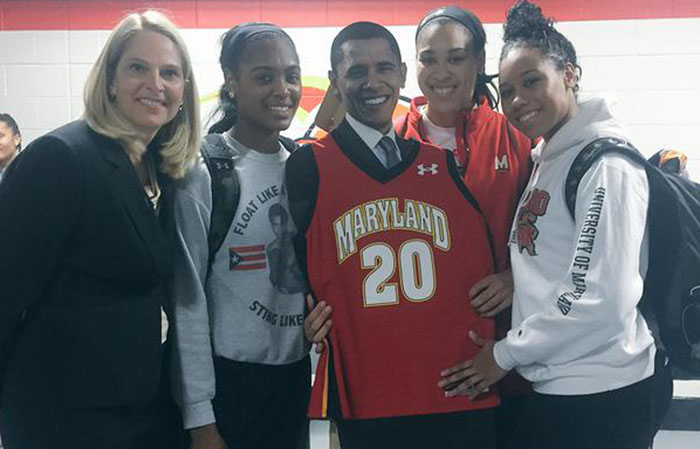 After beating Princeton, Maryland celebrates w/ cutout of President Barack Obama… and he has a new jersey to wear. http://t.co/svZxHqYEcG

To be fair, the President almost had to make the pick, because his niece, Leslie Robinson, is a freshman on Princeton.

The Terrapins were well aware of Obama's selection, so they had some fun in the locker room after busting the President's bracket with Monday night's 85-70 win.

Prop-inspired fun, to be exact. Brenda Frese and the Terrapins had a cutout of Obama, decked out in a Maryland jersey, that they celebrated with and used for photo opportunities.

But, as you can tell from the text in the tweet below, the Terrapins were just enjoying the moment and capitalizing on the high-profile upset pick.

For the record, we ?? our President! We gave him a new jersey to wear! @ESPN_WomenHoop @espnW @SportsCenter pic.twitter.com/iJttJ5W0yI