OSU lists 'National Championship' & 'That team up North' on 2015 schedule 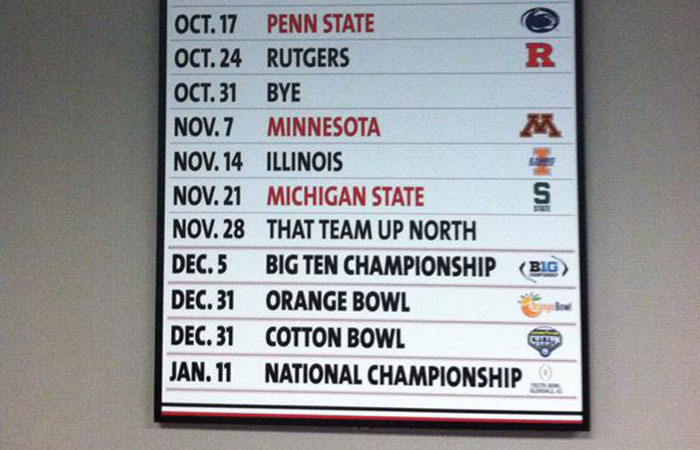 Ohio State's spring football practice is underway as the Buckeyes prepare to build on their incredible 2014 national championship season.

As 2015 spring practice gets underway, several media members were on hand today at the Buckeyes' practice facility, including ESPN.com's Austin Ward. There, Ward tweeted out a photo of Ohio State's 2015 schedule, which includes next year?s national championship game on the schedule. It also has the Big Ten title game, the Orange Bowl and the Cotton Bowl listed on the schedule.

If you look at the photo, you will also notice the schedule has Michigan listed as "THAT TEAM UP NORTH." It is also the only school on the schedule without a logo listed next to the team name.

It looks like the Buckeyes are pretty confident in their chances of returning to the national title game in back-to-back years.

After a dominant showing to close out the 2014 season, how can you blame them?